The Cytoskeleton
Besides its organelles, the cytoplasm contains a network of microtubules, microfilaments, intermediate filaments, and thick filaments (Fig. 4.6). Because they control cell shape and movement, these structures are a major component of the structural elements called the cytoskeleton, which participates in the movement of entire cells. 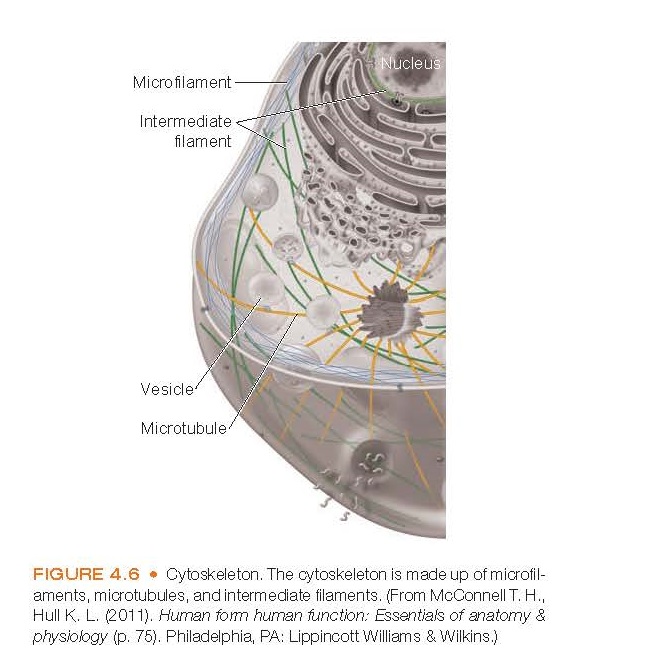 Microtubules
Microtubules are formed from protein subunits called tubulin. They are long, stiff, hollow, cylindrical structures, 25 nm in outer diameter with a lumen 15 nm in diameter. Each microtubule consists of parallel protofilaments, each composed of α- and β-tubulin dimers. Microtubules are dynamic structures that can rapidly disassemble in one location and reassemble in another. During the reassembly process the tubulin dimers polymerize in an end-to-end fashion to form protofilaments. As a result of the polymerization process, each microtubule possesses a nongrowing “minus” end and a rapidly growing “plus” end. During the disassembly process, the tubulin dimers dissociate from the protofilaments and form a pool of free tubulin in the cytoplasm. This pool is used in the polymerization process for reassembly of the protofilaments.
Microtubules function in many ways, including the development and maintenance of cell form. They participate in intracellular transport mechanisms, including axoplasmic transport in neurons and melanin dispersion in pigment cells of the skin. Other functions include formation of the basic structure for several complex cytoplasmic organelles, including the centrioles, basal bodies, cilia, and flagella (Fig. 4.7). 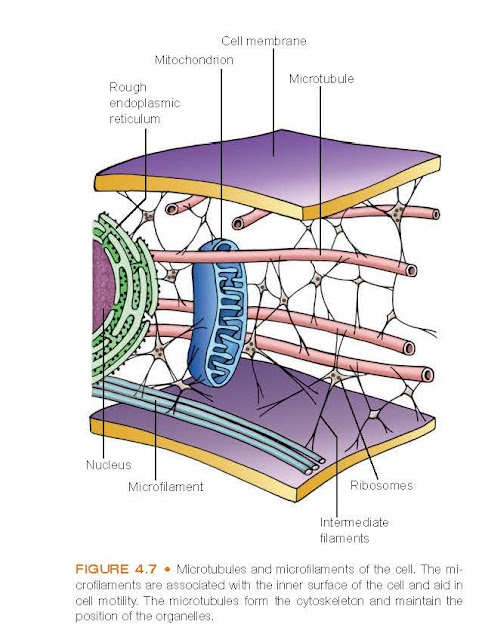 The plant alkaloid colchicine binds to tubulin molecules and prevents the assembly of microtubules. This compound stops cell mitosis by interfering with formation of the mitotic spindle and is often used for cytogenetic (chromosome) studies. It is also used in treating gout to prevent migration of neutrophils and to lower their ability to respond to urate crystals in the tissues. The vinca alkaloid drugs (e.g.,vinblastine and vincristine), which are sometimes used in the treatment of cancer, also bind to microtubules and inhibit formation of the mitotic spindle, which is essential for cell proliferation.

Centrioles and Basal Bodies. Centrioles and  basal  bodies are structurally identical organelles composed of highly organized microtubules. Internally, centrioles and basal bodies have an amorphous central core surrounded by clusters formed of triplet sets of microtubules.
Centrioles are small, cylindrical structures composed of an array of highly organized microtubules. Usually they are paired structures, arranged perpendicular to each other. In dividing cells, the two cylindrical centrioles are initially found in the vicinity of the Golgi apparatus in a region of the cell called the centrosome. During cell division, centrioles form the mitotic spindle that aids in the separation and movement of the chromosomes.
Basal bodies are more numerous than centrioles and are found near the cell membrane in association with cilia and flagella. They are responsible for the formation of the highly organized core of microtubules found in cilia and flagella.

Cilia and Flagella. Cilia and flagella are microtubule-filled cellular extensions whose enclosing membrane is continuous with the cell membrane. Ciliated cells typically possess a large number of cilia, whereas flagellated cells have only one flagellum. In humans, the spermatozoa are the only cell type with flagella. Cilia are found on the apical (luminal) surfaces of many epithelial linings, including the nasal sinuses and bronchi in the upper respiratory system. They also play a prominent role in sensory tissues such as the photoreceptor proteins in the eye, the odorant receptors of the olfactory epithelium, and the kinocilium on the hair cells in the inner ear. Cilia also act in sensory roles at critical stages of embryonic development, and they are essential for the normal functioning of many tissues, including the kidney, during postnatal life. Recent research has linked the pathogenesis of a condition called polycystic kidney disease to a genetic defect in the cilia of the renal tubular cells.
A motile cilium contains nine sets of doublet microtubules that form a hollow cylinder surrounding a central pair of singlet microtubules. The outer doublet microtubules contain ATP motor–driven complexes that cause the adjacent microtubule doublets to slide past each other. All of these microtubules and their associated proteins are anchored to a basal body that is responsible for the formation of a core structure called the axoneme. The axoneme serves as the internal framework that sup- ports the cilium and provides a structure on which mechanical movement is generated. Recent evidence suggests that not all cilia contain this internal structure, and some may be missing the central pair of microtubules. Cilia lacking the central core of microtubules are often called primary cilia and are immotile.
Cilia and flagella are assembled through a process called intraflagellar transport, during which large protein complexes are transported along the ciliary microtubules from the basal body to the ciliary tip and then back to the basal body. These protein complexes are thought to carry ciliary precursors from their site of synthesis in the cytoplasm to their site of assembly at the tip of the cilium. Genetic defects can result in improper ciliary assembly and, as a result, the cilia may be nonfunctional. One of these disorders, the immotile cilia syndrome, impairs sperm motility, causing male sterility while also immobilizing the cilia of the respiratory tract, thus interfering with clearance of inhaled bacteria, leading to a chronic lung disease called bronchiectasis. Kartagener syndrome is an example of immotile cilia syndrome and involves diffuse bronchiolitis, sinus aplasia, and situs inversus totalis, which is a reversal of the thorax and abdomen organs.
Microfilaments
Microfilaments are thin, threadlike cytoplasmic structures. Three classes of microfilaments exist:
1.    Thin microfilaments, which are equivalent to the thin actin filaments in muscle
2.    Intermediate filaments, which are a heterogeneous group of filaments with diameter sizes between those of the thick and thin filaments
3.    Thick myosin filaments, which are present in muscle cells, but may also exist temporarily in other cells.
Muscle contraction depends on the interaction between the thin actin filaments and thick myosin filaments. Microfilaments are present in the superficial zone of the cytoplasm in most cells. Contractile activities involving the microfilaments and associated thick myosin filaments contribute to the movement of the cytoplasm and cell membrane during endocytosis and exocytosis. Microfilaments are also present in the microvilli of the intestine. The intermediate filaments assist in supporting and maintaining the asymmetric shape of cells. Examples of intermediate filaments are the keratin filaments that are found anchored to the cell membrane of epidermal keratinocytes of the skin and the glial filaments that are found in astrocytes and other glial cells of the nervous system. The neurofibrillary tangle found in the brain in Alzheimer disease contains microtubule-associated proteins and neurofilaments, evidence of a disrupted neuronal cytoskeleton.