pediagenosis    August 16, 2018    Health , Nervous , science
Enteric Nervous System
Structure of the enteric nervous system
The enteric nervous system is found in the wall of the gut, prima- rily the small and large intestine, and is involved with normal gastrointestinal motility and secretory function. It contains about 100 million nerve cell bodies. It is heavily innervated/regulated by the autonomic nervous system but is a separate entity with its own intrinsic circuitry and function. It has no major role in the oesopha- gus and it is less clear what role it fulfils in the stomach. 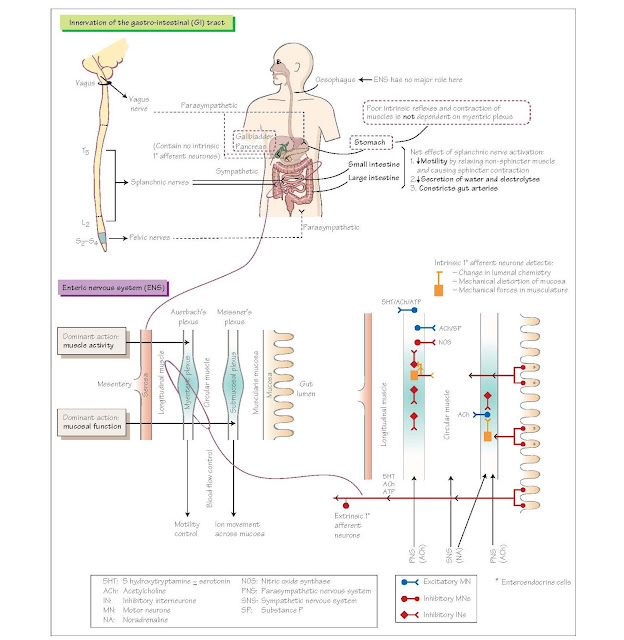 The enteric nervous system consists of two plexuses:
•   myenteric plexus or Auerbach’s plexus, which lies between the longitudinal and circular muscle layers;
•   submucosal plexus or Meissner’s plexus, which lies between the circular  muscle  and  muscularis  mucosa.
The plexuses consist of:
•   excitatory and some inhibitory motor neurones regulate muscle contraction;
•   inhibitory interneurones integrate responses;
•   intrinsic primary (1°) afferent neurones (IPAN) detect the chem- ical and mechanical state of the gut.
Multiple neurotransmitters and receptors are found in the different neuronal populations, the activities of which can therefore be modulated by a large number of drugs as well as by the ANS. Many of the neurones of the enteric nervous system contain more than one neurotransmitter.

Functions of the enteric nervous system
•   The enteric nervous system can function in isolation to coordinate contraction of the gut musculature.
•   It also regulates local food flow and the mucosal movement of ions/electrolytes.
•   It  allows  for  changes  in  local  gut  behaviour  in  response  to local stimuli – both mechanical and chemical – and this may also rely on the release of substances from non-neuronal cells, e.g. 5-hydroxytryptamine (5HT)/adenosine triphosphate (ATP) from entero-endocrine cells.
•   In addition there are ascending and descending neuronal networks that enable the sequential activation of muscles in the gut wall, which allows for the transport of luminal contents down the gut (peristalsis).

Disorders of the enteric nervous system
•   Congenital or developmental abnormalities such as Hirschs- prung’s disease – in which there is a localized absence of enteric nervous system in the colon, causing constipation at birth, and which can only be cured by surgery to remove the atonic bit of bowel.
•   Sporadic or acquired abnormalities, such as irritable bowel syn- drome or chronic constipation as is seen in Parkinson’s disease, (see Chapter 42) where it is due to local degeneration of intrinsic neurones.
•   Secondary to a neuropathy from diabetes mellitus/Guillain– Barré syndrome.
•   Iatrogenic, e.g. laxative abuse/opioid medication.