Organization Of The Cerebral Cortex And Thalamus


An alternative approach is to view the cortex as being organized vertically. This vertical organization has become known as the columnar hypothesis and proposes that the ‘column’ of cortex is the basic unit of cortical processing. 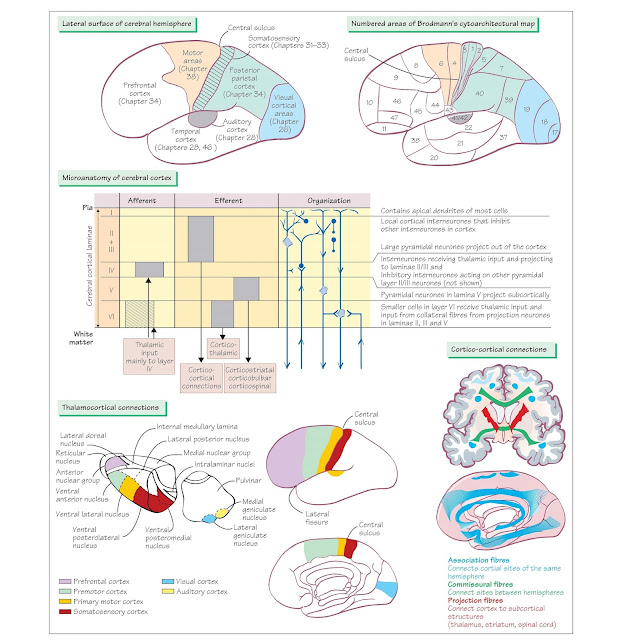 Anatomical organization of the cerebral cortex
The neocortex is classically described as consisting of six layers, although in certain areas of the cerebral cortex further subdivisions are used, e.g. the primary visual cortex (see Chapter 26).
•        The thalamic afferent fibres, relaying sensory information, project to layer IV often with a smaller input to layer VI. They terminate in discrete patches.
•     This input then synapses onto interneurones within the cortex which in turn project vertically to neurones in layers II, III and V, and from there project to other cortical and subcortical sites, respectively.
This, the weight of synaptic relations within the cerebral cortex is in the vertical direction. This arrangement of synaptic connections is well seen in the somatosensory and visual cortices (see Chapters 26 and 31). In many cortical areas with a motor function, the motor output from that cortical area is such that it is directed back at the motor neurones controlling the muscles that move the sensory receptors which ultimately project to that same area of cortex – so-called input–output coupling (see Chapter 39).

Developmental organization of the cerebral cortex
In the mammalian  CNS the entire  population of cortical  neurones is produced by a process of migration from the proliferative zones that are situated around the cavities of the cerebral ventricles. The radial glial fibres, which guide and may even give rise to the migrating neurones, span the fetal cerebral wall and direct the neurones to their correct cortical location in the developing cortical plate from the ventricular and subventricular zones (see Chapter 1). Thus, developmentally, the cortex forms in a vertical fashion.

Functional organization of the cerebral cortex
Serial processing models
The original models proposed that information processing was performed in a serial fashion, such that the cortical cells form a series of hierarchal levels. Thus, one set of cells performs a relatively straightforward analysis, which then converges on another population of neurones that perform a more complex analysis (see, for example, Chapter 26). The ultimate prediction of these hierarchical models is that one neurone at the top of the hierarchy will register the percept – the ‘grandmother’ cell.

Parallel processing models
The discovery of the X, Y and W classes of ganglion cells in the retina (see Chapter 24) led to the development of a competing theory that proposed that information is analysed by a series of parallel pathways, with each pathway analysing one specific aspect of the sensory stimulus (e.g. colour or motion with visual stimuli; see Chapter 26). This theory does not exclude hierarchical process- ing but relegates it to the mode of analysis within separate parallel pathways. In practice, the cortex employs both modes of analysis. Distributed processing models It should be stressed that cortical columns are not to be viewed as a static mosaic structure, as one column may be a member of a number of different pathways of analysis. This organization has been termed the distributed system theory and describes the brain as a complex of widely and reciprocally interconnected systems, with the dynamic interplay of neural activity within and between these systems as the very essence of brain function. Consequently, one column may be a member of many distributed systems, because each distributed system is specific for one feature of a stimulus and one column may code for several features of the stimulus.