Organization Of The Spinal Cord


Organization Of The Spinal Cord
Overall structure
The spinal cord lies within the vertebral canal and extends from the foramen magnum to the lower border of the first lumbar vertebra.
•        It is enlarged at two sites (cervical and lumbar regions) corre- sponding to the innervations of the upper and lower limbs (see Chapter 2).
•        The lower part of the vertebral canal (below L1) contains the lower lumbar and sacral nerves and is known as the cauda equina. Sensory nerve fibres enter the spinal cord via the dorsal (poste- rior) roots and their accompanying cell bodies are located in the dorsal root ganglia, while the motor and preganglionic autonomic fibres exit via the ventral (or anterior) root, together with some mostly unmyelinated afferent fibres. 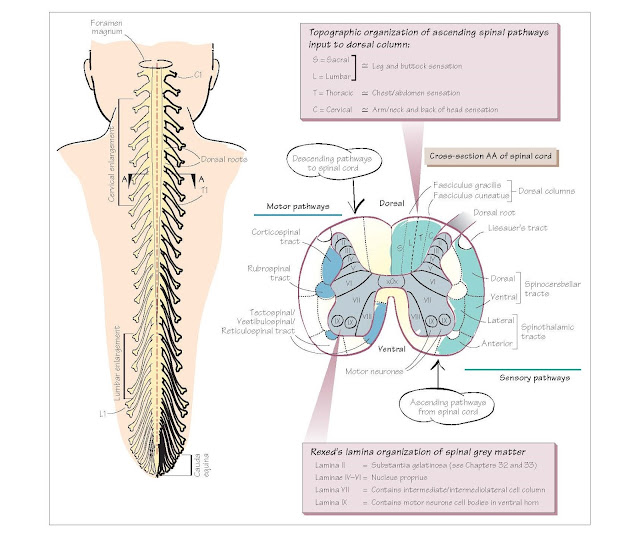 The motor cell bodies (or motor neurones [MNs]) are found in the ventral horn of the spinal cord, while the preganglionic cell bodies of the sympathetic nervous system are found in the intermediolateral column of the spinal cord (see Chapter 3).
The neuronal cell bodies that make up the central grey matter of the cord are organized into a series of laminae (of Rexed). The white matter surrounding this is composed of myelinated and unmyelinated axons constituting the ascending and descending spinal tracts.

Organization of sensory afferent fibres entering the spinal cord
Sensory information from the peripheral receptors is relayed by primary afferent nerve fibres which terminate in layers I–V of the dorsal horn, the site for termination being different for different receptors. However, in reality, many afferent fibres divide (into an ascending and a descending branch) as they enter the spinal cord so that synaptic contact can be made both with many interneu- rones in the dorsal horn, and up and down the cord through Lis- sauer’s tract.

Sensory processing in the dorsal horn
• Typically, a number of primary afferents make synaptic contact with a single dorsal horn neurone.
• This convergence of input has the effect of reducing the acuity (accuracy) of stimulus location, but the process of lateral inhibition helps minimize this loss of acuity by promoting the inhibition of submaximally activated fibre inputs and thus increasing spatial contrast in the sensory input (see Chapter 22).
•   The dorsal horn receives a number of descending inputs from supraspinal structures that are important in modulating the processing of sensory information through the spinal cord (see, for example, Chapter 32).
Ascending sensory pathways in spinal cord The major ascending pathways of the spinal cord are (see also Chapter 22):
•        Spinothalamic tract (STT), also known as the anterolateral system;
•        Spinocerebellar tracts;
•        Dorsal columns (dcs; sometimes called the dorsal column- medial lemniscus system).
Each tract relays specific information in a topographical fashion, i.e. the sensory information from different parts of the body is conserved in the organization of the ascending pathways. Inputs from the more rostral parts of the body (arm as opposed to leg) supply fibres that lie more laterally in the ascending pathway.
Both the DC and STT decussate (fibres cross the midline) and therefore the sensory information they relay is ultimately processed in the contralateral cerebral hemisphere. However, the site at which this decussation occurs is different for the two pathways, with the anterolateral system crossing the midline in the spinal cord while the DCs decussate in the lower medulla after synapsing in the DC nuclei and forming the medial lemniscus (see Chapters 31 and 32).

Spinal motor neurones
•        α- and γ-MNs are both found in the ventral (anterior) horn.
•    The α-MNs are some the largest neurones found in the nervous system and innervate skeletal muscle fibres, while the γ-MNs inner- vate the intrafusal muscle fibres of the muscle spindle (see Chapter 36).
•       The cervical cord MNs innervate the arm muscles while the lumbar and sacral MNs innervate the leg musculature.
•     The MNs are arranged somatotopically across the ventral horn such that the more medially placed MNs innervate proximal muscles, while those located more laterally innervate distal muscles (see Chapter 35–37).

Descending motor tracts
There are a number of descending motor pathways that are defined by their site of origin within the brain (see Chapter 37):
•     Corticospinal (Cost) Or Pyramidal Tract Originates In The Cere- Bral Cortex;
•    Rubrospinal Tract Originates From The Red Nucleus In The Midbrain And Along With The Cost Innervates The Laterally Placed Mns That Supply The Distal Musculature;
•   The Vestibulospinal, Reticulospinal And Tectospinal Tracts – Known As The Extrapyramidal Tracts – Innervate The More Ventro- Medially Placed Mns That Control The Axial Musculature (See Chapters 35–37).

Clinical features of spinal cord damage (see Chapter 55)
A knowledge of the organizational anatomy of the spinal cord allows one to predict the pattern of deficits with damage, which is of great value in clinical neurology. Examples of specific spinal cord lesions and syndromes illustrating this point are discussed in hapters 54 and 55.