Anatomy Of The Brainstem


Anatomy Of The Brainstem
The brainstem begins at the foramen magnum and extends to the cerebral peduncles and thalamus. It consists of the medulla, pons and midbrain and is located anterior to the cerebellum to which it is connected by three cerebellar peduncles. It contains the following:


•      Nuclei for 10 of the 12 pairs of cranial nerves (see Chapter 7), the exceptions being the olfactory and optic nerves;
•     Networks of neurones for controlling eye movements, which includes the third, fourth and sixth cranial nerves (see Chapter 56);
•       Monoaminergic nuclei that project widely throughout the central nervous system (see Chapter 18);
•    Areas that are vital in the control of respiration and the cardio- vascular system, as well as the autonomic nervous system (see Chapter 3);
•    Areas important in the control of consciousness including sleep and associated monoaminergic nuclei (see Chapter 43);
•        Ascending and descending pathways linking the spinal cord to supraspinal structures, such as the cerebral cortex and cerebellum, some of which take their origin from the brainstem (see Chapters 9, 31, 32 and 35–39). 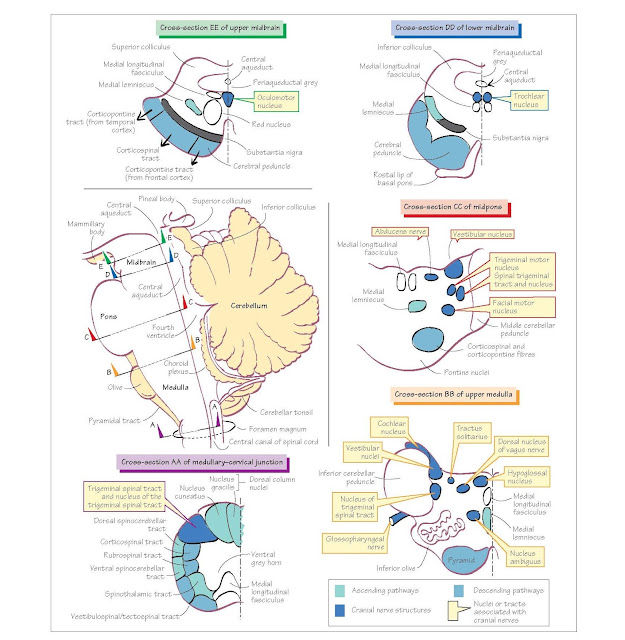 Important structures in the brainstem
•    The dorsal column nuclei represent the primary site of termination of the fibres conveyed in the dorsal columns (DCs), responsi- ble for light touch, vibration perception and joint position sense. The relay neurones in this structure send axons that decussate in the lower medulla to form the medial lemniscus, which synapses within the thalamus (see Chapter 31).
•    The pyramid which represents the descending corticospinal tract (CoST) in the medulla, a pathway that decussates at the lower border of this structure.
•    The tractus solitarius and nucleus ambiguus are associated with taste and the motor innervation of the pharynx by the glossopha- ryngeal and vagus nerves (see Chapter 7).
•   The inferior olive in the medulla receives inputs from a number of sources and provides the climbing fibre input to the cerebellum (see Chapters 40 and 49).
•       The cerebellar peduncles convey information to and from the cerebellum (see Chapter 40).
•   The medial longitudinal fasciculus originates in the vestibular nucleus and projects rostrally connecting some of the oculomotor nuclei (third and sixth cranial nerves) as well as caudally to form part of the vestibulospinal tract.
•    The vestibular nucleus has important connections  from the balance organs within the inner ear and projects to the spinal cord and cerebellum as well as other brainstem structures (see Chapters 20, 40 and 49).
•    The substantia nigra in the midbrain contains both dopamine and γ-aminobutyric acid (GABA) neurones, forms part of the basal ganglia and is involved in the control of movement (see Chapters 41 and 42). The loss of its dopaminergic neurones is the major pathological event in Parkinson’s disease (see Chapter 42).
•   The red nucleus in the midbrain is intimately associated with the cerebellum, and is the site of origin for the rubrospinal tract which, with the CoST, forms the lateral descending pathway of motor control (see Chapter 37).
•        The periaqueductal grey matter of the mesencephalon is an area rich in endogenous opioids and thus is important in the supraspi- nal modulation of nociception (see Chapter 32).
•   The central aqueduct of Sylvius running through the midbrain connects the third to the fourth ventricle, and narrowing of it (stenosis) can cause hydrocephalus (see Chapter 5).
•    The cerebral peduncles contain the descending motor pathways from the cerebral cortex to the spinal cord and brainstem, especially the pons (see Chapter 35).
•    The inferior colliculi in the midbrain are part of the auditory system (see Chapter 28) while the superior colliculi are more involved with visual processing and eye movement control (see Chapters 25 and 56).
Thus, damage to the brainstem can have devastating conse- quences, although small lesions can often be localized with great accuracy because of the number of structures located within this small area of the brain. The most common causes of lesions in this part of the brain are either inflammatory (e.g. multiple sclerosis; see Chapter 62) or vascular in nature (see Chapter 64). However, disorders of the brainstem can also be seen with tumours (see Chapter 13) and a host of other conditions, and if damage is severe and extensive then it can be fatal.
Testing specifically for brainstem functions is undertaken to assess if an individual with extensive brain injury (e.g. massive stroke or head injury) is brain dead, which has implications for further interventional therapy and organ donation. This assessment involves looking at reflex eye movements to head movement, eye movement responses to stimulation of the vestibular system and spontaneous respiration.