Cranial Nerves
Olfactory nerve
The receptors for olfaction are found within the nasal mucosa, and their axons project through the cribriform plate to the olfactory bulb on the undersurface of the frontal lobe (see Chapter 30). This cranial nerve therefore does not originate or pass through the brainstem and conveys information on smell. 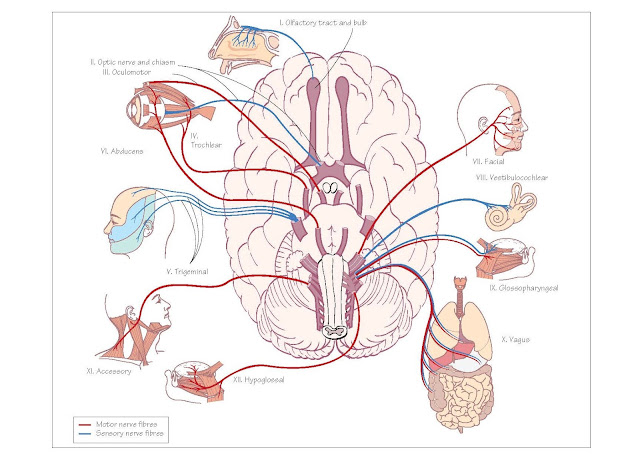 •   Damage to this nerve occurs most commonly with head trauma and shearing of the olfactory axons as they pass through the cri- briform plate causing anosmia.

Optic nerve
The photoreceptors in the eye project onto bipolar cells to ganglion cells and then to the CNS via the optic nerve. The nerve passes through the optic canal at the back of the orbit into the brain and unites with the optic nerve from the other eye to form the optic chiasm. The fibres from here pass ultimately to the visual cortex as well as to a number of subcortical sites (see Chapters 24–26).
•   Damage to this nerve will affect vision, although the extent and type of this visual loss depends on the site of injury (see Chapter 25).

Oculomotor nerve
This originates in the midbrain at the level of the superior collicu- lus and supplies all the extraocular muscles apart from the lateral rectus, and superior oblique. It also carries the parasympathetic innervation to the eye and provides the major innervation of levator palpebrae superioris.
•   A complete third nerve palsy causes the eye to lie ‘down and out’ with a fixed dilated unresponsive pupil and ptosis (droopy eyelid). Common causes of this are a posterior communicating artery aneurysm or a microvascular insult to the nerve itself as occurs in diabetes mellitus, for example.

Trochlear nerve
This nerve originates in the midbrain at the level of the inferior colliculus, and exits out of the brainstem dorsally. It supplies the superior oblique muscle.
•   Damage to this nerve causes double vision (diplopia) when looking down. A common cause of fourth cranial nerve palsy is head  trauma.

Fifth cranial or trigeminal nerve
The trigeminal nerve has both a motor and sensory function. The motor nucleus is situated at the mid-pontine level, medial to the main sensory nucleus of the trigeminal nerve, and receives an input from the motor cortex (see Chapter 38 and 39). It supplies the muscles of mastication. Sensation from the whole face (including the cornea) passes to the brainstem in the trigeminal nerve, and synapses in three major nuclear complexes: the nucleus of the spinal tract and the main sensory nucleus of the trigeminal nerve; and the mesencephalic nucleus. Sensation from the face is relayed via three branches: the ophthalmic division that supplies the fore-head; the maxillary division that innervates the cheek; and the mandibular branch from the jaw–with the more rostral fibres (ophthalmic branch fibres) passing to the lowest part of the nucleus of the spinal tract in the upper cervical cord. These brainstem trigeminal nuclei in turn project to the thalamus as part of the somatosensory and pain systems (see Chapters 31 and 32).
•   Damage to the trigeminal nerve results in weak jaw opening and chewing, coupled to facial sensory loss and an absent corneal reflex.
Sixth cranial or abducens nerve
This originates from the dorsal lower portion of the pons and supplies the lateral rectus muscle.
•   Damage to this nerve results in horizontal diplopia when looking to the lesioned side and can be caused by local brainstem path- ology or can be a false localizing sign in raised intracranial pressure.

Seventh cranial or facial nerve
This is predominantly a motor nerve, although it does carry parasympathetic fibres to the lacrimal and salivary glands (the greater superficial petrosal nerve and chorda tympani) as well as sensation from the anterior two-thirds of the tongue (the chorda tympani). The motor nucleus for the facial nerve originates in the pons, and supplies all the muscles of the face except for those involved in mastication.
•   A lesion of this nerve produces a lower facial nerve palsy with weakness of all the facial muscles ipsilateral to the side of the lesion. In addition, there is a loss of taste on the anterior two-thirds of the tongue if the lesion occurs proximal to the origin of the chorda tympani. This is most commonly seen in Bell’s palsy. In contrast, damage to the descending motor input to the facial nucleus from the cortex (an upper motor neurone facial palsy) causes weakness of the lower part of the contralateral face only, as the musculature of the upper part of the face has upper motor neurone innervation from the motor cortex of both hemispheres.

Eighth cranial or vestibulocochlear nerve
This conveys information from the cochlea (the auditory or cochlear nerve; see Chapters 27 and 28) as well as the semicircular canals and otolith organs (the vestibular nerve; see Chapter 29).
•   Damage to this nerve (e.g. in acoustic neuromas) causes distur- bances in balance with deafness and tinnitus (a ringing noise).

Ninth cranial or glossopharyngeal nerve
The glossopharyngeal nerve contains motor, sensory and parasympathetic fibres. The motor fibres originate from the rostral nucleus ambiguus and supply the stylopharyngeus muscle, while the sensory fibres synapse in the tractus solitarius (or nucleus of the solitary tract) and provide taste and sensation from the poste- rior tongue and pharynx. The parasympathetic fibres originate in the inferior salivatory nucleus and provide an input to the parotid gland.
•   Damage to this nerve usually occurs in conjunction with the vagus nerve (see below).

Tenth cranial or vagus nerve
This nerve provides a motor input to the soft palate, pharynx and larynx, which originates in the dorsal motor nucleus of the vagus and nucleus ambiguus. It also has a minor sensory role, conveying taste from the epiglottis and sensation from the pinna, but has a significant parasympathetic role (see Chapter 3).
•   Damage to the vagus nerve causes dysphagia and articulation disturbances and, as with glossopharyngeal nerve lesions, there may be a loss of the gag reflex.
Eleventh cranial or spinal accessory nerve
This is purely motor in nature and originates from the nucleus ambiguus in the medulla and the accessory nucleus in the upper cervical spinal cord. It supplies the sternocleidomastoid and trapezius muscles.
•   Damage to the eleventh nerve causes weakness in these muscles.
Twelfth cranial or hypoglossal nerve
The hypoglossal nerve provides the motor innervation of the tongue. Its fibres originate from the hypoglossal nucleus in the posterior part of the medulla.
•   Damage to this nerve causes wasting and weakness in the tongue, which leads to problems of swallowing and speech, and is most commonly seen in motor neurone disease (see Chapter 60). Isolated damage of this nerve is rare and it is more commonly affected with other lower cranial nerves (e.g. the ninth, tenth and eleventh cranial nerves) and in such cases the patient may present with a bulbar palsy. A pseudobulbar palsy, in contrast, refers to a loss of the descending cortical input to these cranial nerve nuclei.