•   The vertebral arteries enter the skull through the foramen magnum and unite to supply blood to the brainstem (basilar artery) and posterior parts of the cerebral hemisphere (posterior cerebral arteries) – the whole network constituting the posterior circulation.
•   The internal carotid arteries (ICAs) traverse the skull in the carotid canal and the cavernous sinus before piercing the dura and entering the middle cranial fossa just lateral to the optic chiasm. They then divide and supply blood to the anterior and middle parts of the cerebral hemispheres (anterior [ACA] and middle [MCA] cerebral arteries). In addition, the posterior and anterior cerebral circulations anastomose at the base of the brain in the circle of Willis, with the anterior and posterior communicating arteries offering the potential to maintain cerebral circulation in the event of a major arterial occlusion. The ICA prior to their terminal bifurcation supply branches to the pituitary (hypophysial arteries), the eye (ophthalmic artery), parts of the basal ganglia (globus pallidus) and limbic system (anterior choroidal artery) as well as providing the posterior communicating artery.
•   The MCA forms one of the two terminal branches of the ICA and supplies the sensorimotor strip surrounding the central sulcus (with the exception of its medial extension which is supplied by the ACA) as well as the auditory and language cortical areas in the dominant (usually left) hemisphere. Therefore, occlusion of the MCA causes a contralateral paralysis that affects the lower part of the face and arm especially, with contralateral sensory loss or inattention and a loss of language if the dominant hemisphere is involved (see Chapters 28, 31, 34, 35, 38, and 39). In addition, there are a number of small penetrating branches of the MCA that supply subcortical structures such as the basal ganglia and internal capsule (see below).
•   The two ACAs, which form the other major terminal vessels of the ICAs, are connected via the anterior communicating artery and supply blood to the medial portions of the frontal and parietal lobes as well as the corpus callosum. Occlusion of an ACA characteristically gives paresis of the contralateral leg with sensory loss, and on occasions deficits in gait and micturition accompanied with mental impairment and dyspraxia (see Chapter 34).
•   The vertebral arteries, which arise from the subclavian artery, ascend to the brainstem via foramina in the transverse processes of the upper cervical vertebrae. At the level of the lower part of the pons the vertebral arteries unite to form the basilar artery, which then ascends before dividing into the two posterior cerebral arteries (PCAs) at the superior border of the pons. Each vertebral artery en route to forming the basilar artery gives off a number of branches including the posterior spinal artery, the posterior inferior cerebellar artery (PICA) and the anterior spinal artery. These spinal arteries supply the upper cervical cord (see below), whereas the PICA supplies the lateral part of the medulla and cerebellum. Occlusion of this vessel gives rise to the lateral medullary syndrome of Wallenberg.
•   The PCAs supply blood to the posterior parietal cortex, the occipital lobe and inferior parts of the temporal lobe. Occlusion of these vessels causes a visual field defect (usually a homonymous hemianopia with macular sparing, as this cortical area receives some supply from the MCA; see Chapter 25), amnesic syndromes (see Chapters 45 and 46), disorders of language (see Chapter 26) and, occasionally, complex visual perceptual abnormalities (see Chapter 28). The PCA has a number of central perforating or penetrating branches that supply the midbrain, thalamus, subthalamus, poste- rior internal capsule, optic radiation and cerebral peduncle, and these are commonly affected in hypertension, when occlusion of the PCA produces small lacunar infarcts.
Apart from occlusion, haemorrhage from cerebral vessels may involve the brain substance (intracerebral), the subarachnoid space or both. Such haemorrhages usually occur in the context of either trauma, hypertension or rupture of congenital aneurysms in the circle of Willis (berry aneurysms) (see Chapter 64). 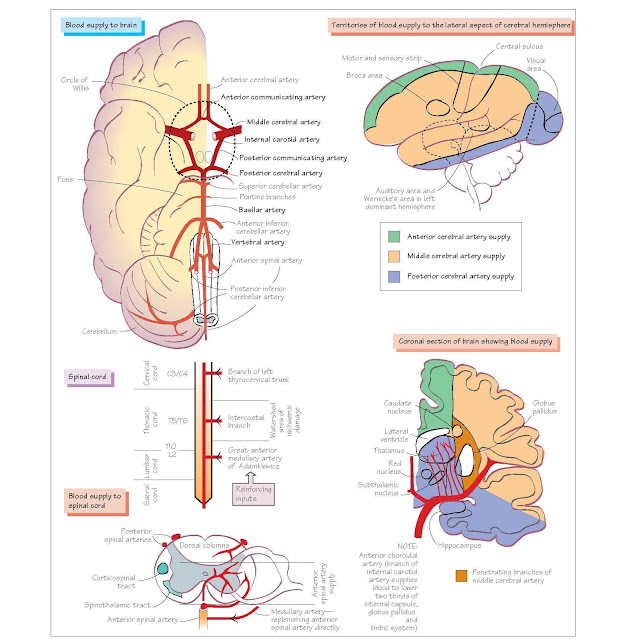 Venous drainage of the brain
The brainstem and cerebellum directly drains into the dural venous sinuses adjacent to the posterior cranial fossa. The cerebral hemi- spheres, in contrast, have internal and external veins – the external cerebral veins drain the cortex and empty into the superior sagittal sinus (see Chapter 5). This sinus drains into the transverse sinus, then the lateral sinus, before emptying into the internal jugular vein. The internal cerebral veins drain the deep structures of the cerebral hemisphere to the great vein of Galen and thence into the straight sinus. Occlusion of either of these venous systems can occur, causing raised intracranial pressure with or without focal deficits.