pediagenosis    August 16, 2018    Health , Nervous , science
Meninges And Cerebrospinal Fluid
The brain is enclosed by three protective layers, which also extend down the spinal cord.
•  The dura mater is a thick tough membrane lying close to the skull and vertebrae and innervated by afferent fibres of the trigeminal and upper cervical nerves.
•  Adjacent to the dura mater is the arachnoid mater, a thin membrane with thread-like processes that project into the subarachnoid space and making contact with the delicate pia mater.
•  The pia mater envelops the spinal cord and contours of the brain surface and dips into the sulci. 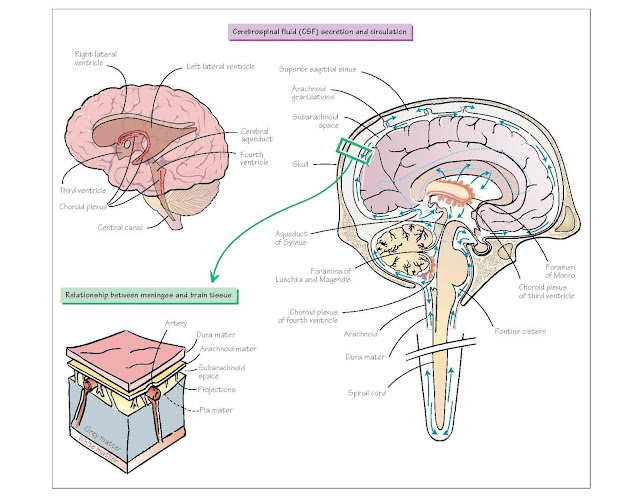 The subarachnoid space is filled with cerebrospinal fluid (CSF) and also accommodates major arteries, branches of which project down through the pia into the central nervous system (CNS). At specific sites the size of the subarachnoid space increases to form cisterns. These are particularly prevalent in the region of the brain-stem and the largest is the cisterna magna found between the cerebellum and medulla.
The meninges extend caudally enclosing the spinal cord. Here the dura is attached to the foramen magnum at its upper limit and projects down to the second sacral vertebrae.

Cerebrospinal fluid (CSF) production and  circulation
•   CSF is secreted by the choroid plexuses, which are found prima- rily in the ventricles.
•   The rate of production varies between 300 and 500 mL/24 h and the ventricular volume is approximately 75 mL.
•   CSF is similar to blood plasma although it contains less albumin and glucose.
•   After production, CSF flows from the lateral ventricles into the third ventricle via the intraventricular foramina of Monro and then passes into the fourth ventricle through the central aqueduct of Sylvius and into the subarachnoid space via the foramina of Luschka and Magendie. From the subarachnoid space at the base of the brain, CSF flows rostrally over the cerebral hemispheres or down into the spinal cord.
CSF reabsorption occurs within the superior sagittal and related venous sinuses. Arachnoid granulations are minute pouches of the arachnoid membrane projecting through the dura into the venous sinuses. The exact mechanism by which CSF is reabsorbed is not clear but it does involve the movement of all CSF constituents into the venous blood. As well as playing an important part in main- taining a constant intracerebral chemical environment (see below), the CSF also helps protect the brain from mechanical damage by buffering the effects of impact.

Blood–brain barrier
The blood–brain barrier (BBB) used to be thought of as a single physical barrier preventing the passage of molecules and cells into the brain. More recently, however, it has been shown to be made up of a series of different transport systems for facilitating or restricting the movement of molecules across the blood–CSF inter- face. A characteristic of cerebral capillary endothelial cells is the presence of tight junctions between such cells, which are induced and maintained by  astrocytic foot processes  (see Chapter 13). These unusually tight junctions reduce opportunities for the movement of large molecules and cells, and thus require the existence of specific transport systems for the passage of certain critical molecules into the brain.
•   Small molecules such as glucose pass readily into the CSF despite not being lipid soluble.
•   Larger protein molecules do not enter the brain, but there are a number of carrier mechanisms that enable the transport of other sugars and some amino acids.
The rôle of the barrier is to maintain a constant intracerebral chemical environment and protect against osmotic challenges, while granting the CNS relative immunological privilege by pre- venting cells from entering it (see Chapter 62). However, from a therapeutic point of view the barrier reduces or prevents the delivery of many large-molecular-weight drugs (e.g. antibiotics) into the brain and represents a major problem in the treatment of many CNS disorders.

Clinical disorders
Hydrocephalus
Hydrocephalus is defined as dilatation of the ventricular system and so can be seen in cases of cerebral atrophy, e.g. dementia (compensatory   hydrocephalus).   However,   hydrocephalus   can also occur as a result of increased pressure within the ventricular system, secondary to an obstruction in the flow of CSF (obstruc- tive hydrocephalus). This typically occurs at the outlets from the fourth ventricle into the subarachnoid space, where the obstruc- tion may be linked to the presence of a tumour, congenital malformation or the sequelae of a previous infection (see below). Alternatively, the flow of CSF from the third to the fourth ventri- cle may be impaired as a result of the development of central aqueduct stenosis.
Hydrocephalus is also seen in rare conditions of oversecretion of CSF (e.g. tumours of the choroid plexus) as well as in the common situation of reduced absorption as is characteristically seen in spina bifida.
The symptomatology of hydrocephalus is varied but classically the patient presents with features of raised intracranial pressure (early morning headache, nausea, vomiting) and, in acute rises of pressure, altered levels of consciousness with brief periods of visual loss. Overall, probably the most common cause of raised intracra- nial pressure is a glioma tumour (see Chapter 13) producing these effects by virtue of its mass. Such tumours in the posterior fossa can also directly cause hydrocephalus, which may contribute to the raised intracranial pressure.
In obstructive hydrocephalus the treatment focuses on draining excess CSF using a variety of shunts linking the ventricles to either the heart (atrium) or the peritoneal cavity.

Meningitis
Meningitis or inflammation within the meningeal membrane can be caused by a number of different organisms. In acute infection there is the rapid spread of inflammation throughout the entire subarachnoid space of the brain and spinal cord, which produces the symptoms of headache, pyrexia, vomiting, neck stiffness (meningism) and, in severe forms of the disease, reduced levels of con- sciousness. The early administration of antibiotics is essential although the type of antibiotic employed will depend on the nature of the organism responsible for the inflammation.
In other cases the infection or inflammation may follow a more subacute course, such as tuberculous meningitis or sarcoidosis. In such cases, secondary hydrocephalus may ensue as a result of meningeal thickening at the base of the  brain  obstructing CSF flow.
Rarely, tumours can spread up the meninges giving a malignant meningitis. This characteristically presents as an evolving cranial nerve or nerve root syndrome with pain. This is to be distinguished from primary tumours of the meninges – meningiomas – which are slow growing and benign, and typically present with epileptic seizures or deficits secondary to compression of neighbouring CNS structures.