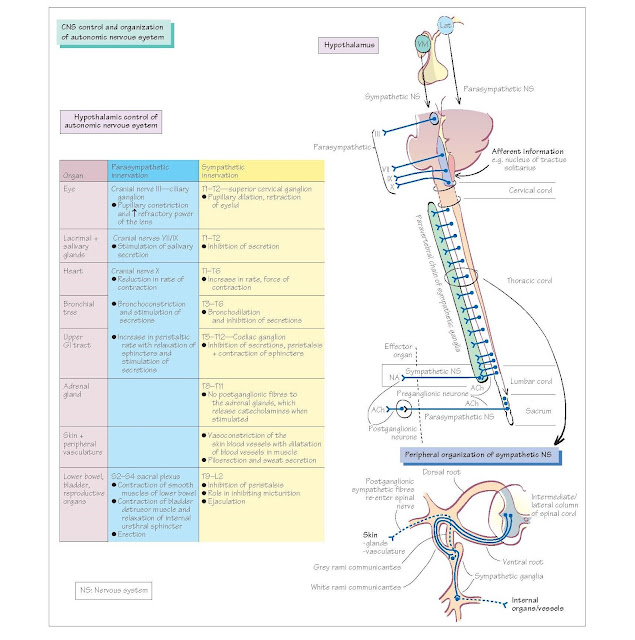 Clinical features of damage to the autonomic nervous system
Damage to the ANS can either be local to a given anatomical structure, or generalized when there is loss of the whole system caused by either a central or peripheral disease process.
•   Focal peripheral lesions: These are not uncommon and the deficiencies resulting from these lesions can be easily predicted. For example, loss of the sympathetic innervation to the eye results in pupillary constriction (miosis), drooping of the upper eyelid (ptosis) and loss of sweating around the eye (anhydrosis) – a triad of signs known as Horner’s syndrome. Other examples include the reflex sympathetic dystrophies where there is severe pain and auto- nomic changes confined to a single limb, often in response to some trivial injury. The exact role of the sympathetic nervous system in the genesis of these conditions is not known, as local sympathectomies are not always effective treatments. However, in some instances these treatments can help which may relate to the fact that the nociceptors can start expressing receptors for NA (see Chapters 32 and 33).
•   More global damage to the ANS: This can occur because of degeneration of the central neurones either in isolation (e.g. pure autonomic failure) or as part of a more widespread degenerative process as is seen, for example, in multiple-system atrophy, where there may be additional cell loss in the basal ganglia and cerebel- lum. Alternatively, the autonomic failure may result from a loss of the peripheral neurones, e.g. in diabetes mellitus, certain forms of amyloidosis, alcoholism and Guillain–Barré syndrome. Finally, abnormalities in the ANS can be seen with certain toxins (e.g. botulism; see Chapter 16) as well as in Lambert–Eaton myasthenic syndrome (see Chapters 16 and 62).
In all these cases the patient presents with orthostatic and post-prandial hypotension (syncopal or presyncopal symptoms on standing, exercising or eating a big meal) with a loss of variation in heart rate, bowel and bladder disturbances (urinary urgency, frequency and incontinence), impotence, loss of sweating and pupillary responses. The symptoms are often difficult to treat and a number of agents are used to try to improve the postural hypotension and sphincter abnormalities. Agents for postural hypotension include fludrocortisone, ephedrine, domperidone, midodrine and vasopressin analogues (all of which cause fluid retention).