Organization Of The Nervous System

pediagenosis    August 16, 2018    Health , Nervous , science
Organization Of The Nervous System
The nervous system can be divided into three major parts: the autonomic (ANS), peripheral (PNS) and central (CNS) nervous systems. The PNS is defined as those nerves that lie outside the brain, brainstem or spinal cord, while the CNS embraces those cells that lie within these structures. 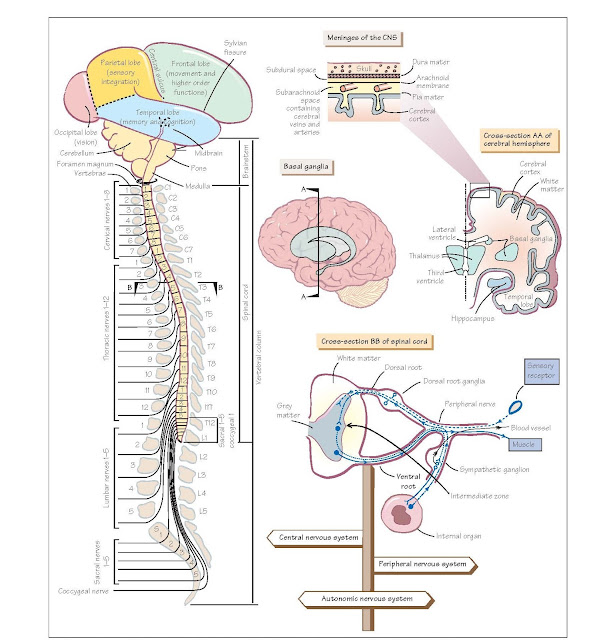 Autonomic nervous system
•   The ANS has both a central and peripheral component and is involved with the innervation of internal and glandular organs (see Chapter 3): it has an important role in the control of the endocrine and homoeostatic systems of the body (see Chapter 3, 11). The peripheral component of the ANS is defined in terms of the enteric (see Chapter 4), sympathetic and parasympathetic systems (see Chapter 3).
•   The efferent fibres of the ANS originate either from the intermediate zone (or lateral column) of the spinal cord or specific cranial nerve and sacral nuclei, and synapse in a ganglion, the site of which is different for the sympathetic and parasympathetic systems. The afferent fibres from the organs innervated by the ANS pass via the dorsal root to the spinal cord.

Peripheral nervous system
•   The PNS consists of nerve trunks made up of both afferent fibres or axons conducting sensory information to the spinal cord and brainstem, and efferent fibres transmitting impulses primarily to the muscles.
•   Damage to an individual nerve leads to weakness of the muscles it innervates and sensory loss in the area from which it conveys sensory information.
•   The peripheral nerves occasionally form a dense network or plexus adjacent to the spinal cord (e.g. brachial plexus in the upper limb).
•   The peripheral nerves connect with the spinal cord through foramina between the bones (or vertebrae) of the spine (or verte- bral column), or with the brain through foramina in the skull.

Brainstem, cranial nerves and cerebellum
•   The spinal cord gives way to the brainstem, which lies at the base of the brain and is composed of the medulla, pons and midbrain (or mesencephalon as it is sometimes called, although this is strictly a term that should be reserved for this region of the brain in embryonic development) and contains discrete collections of neu- rones or nuclei for 10 of the 12 cranial nerves, the exceptions being the first (olfactory) and second (optic) nerves (see Chapter 7).
•   The brainstem and the cerebellum constitute the structures of the posterior fossa.
•   The cerebellum is connected to the brainstem via three pairs of cerebellar peduncles, and is involved in the coordination of move- ment (see Chapter 40).

Meninges
•   The CNS is enclosed within the skull and vertebral column Separating these structures are a series of membranes referred to as the meninges.
•   The pia mater is separated from the delicate arachnoid membrane by the subarachnoid space (containing the cerebrospinal fluid), which in turn is separated from the dura mater by the subdural space (see Chapter 5).