Development Of The Nervous System

The first signs of nervous system development occur in the third week of gestation, under the influence of secreted factors from the notochord, with the formation of a neural plate along the dorsal aspect of the embryo. This plate broadens, folds (forming the neural groove) and fuses to form the neural tube, which ultimately gives rise to the brain at its rostral (i.e. towards the head) end and the spinal cord caudally (i.e. towards the feet/tail end). The fusion begins approximately halfway along the neural groove at the level of the fourth somite and continues caudally and rostrally with the closure of the posterior/caudal and anterior/rostral neuropore during the fourth week of gestation. 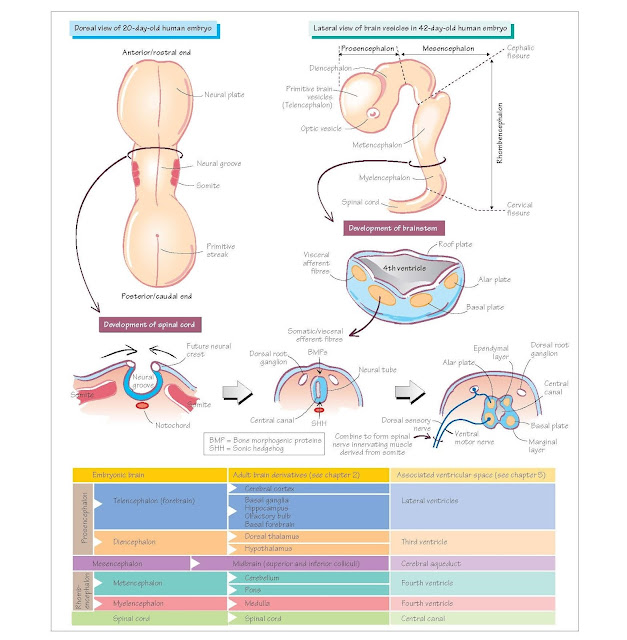 The development of the spinal cord
The process of neural tube fusion isolates a group of cells termed the neural crest.
•   The neural crest gives rise to a range of cells including the dorsal root ganglia (DRG) and peripheral components of the autonomic nervous system (ANS; see Chapter 3).
•   The DRG contain the sensory cell bodies which send their devel- oping axons into the evolving spinal cord and skin.
•   These growing neuronal processes or neurites have an advancing growth cone that finds its appropriate target in the periphery and central nervous system (CNS), using a number of cues including cell adhesion molecules and diffusible neurotrophic factors (see Chapter 48).
The neural tube surrounds the neural canal, which forms the central canal of the fully developed spinal cord.
•   The tube itself contains the neuroblasts (ependymal layer), which divide and migrate out to the mantle layer, where they differentiate into neurones to form the grey matter of the spinal cord (see Chapter 2).
•   The developing processes from the neuroblasts/neurones grow out into the marginal layer, which therefore ultimately forms the white matter of the spinal cord.
•   The dividing neuroblasts segregate into two discrete populations, the alar and basal plates, which in turn will create the dorsal and ventral horns of the spinal cord while a small lateral horn of visceral efferent neurones (part of the ANS) develops at their interface in the thoracic and upper lumbar cord (see Chapter 3).
•   This dorsoventral patterning relies, at least in part, on factors secreted dorsally (bone morphogenic proteins (BMPs)) or ven- trally from the notochord (sonic hedgehog (SHH)).

The development of the brain
Adult neurogenesis
Until recently it was believed that no new neurones could be born in the adult mammalian brain. However, it is now clear that neural progenitor  cells  can  be  found  in  the  adult  CNS,  including  in humans. These cells are predominantly found in the dentate gyrus of the hippocampus (see Chapter 45) and just next to the lateral ventricles in the subventricular zone (SVZ). They may also exist at other sites of the adult CNS but this is contentious. They respond to a number of signals and appear to give rise to functional neurones in the hippocampus and olfactory bulb, with the latter cells migrating from the SVZ to the olfactory bulb via the rostral migratory stream (RMS). They may  therefore  fulfil  a role in certain forms of memory and possibly in mediating the therapeutic effects of some drugs such as antidepressants (see Chapter 57).

Disorders of central nervous system embryogenesis
•   Anencephaly occurs when there is failure of fusion of the anterior rostral neuropore. The cerebral vesicles fail to develop and thus there is no brain formation. The vast majority of fetuses with this abnormality are spontaneously aborted.
•   Spina bifida refers to any defect at the lower end of the vertebral column and/or spinal cord. The most common form of spina bifida refers to a failure of fusion of the dorsal parts of the lower vertebrae (spina bifida occulta). This can be associated with defects in the meninges and neural tissue which may herniate through the defect to form a meningocoele and meningomyelocoele, respectively. The most serious form of spina bifida is when nervous tissue is directly exposed as a result of a failure in the proper fusion of the posterior/caudal neuropore. Spina bifida is often associated with hydrocephalus (see Chapter 5). Occasionally, bony defects are found at the base of the skull with the formation of a meningocoele. However, unlike the situation at the lower spinal cord, these can often be repaired without any neurological deficit being accrued.
•   Cortical dysplasia refers to a spectrum of defects that are the result of the abnormal migration of developing cortical neurones. These defects are becoming increasingly recognized with improved imaging of the human CNS, and are now known to be an important cause of epilepsy (see Chapter 61).
•   Many intrauterine infections (such as rubella), as well as some environmental agents (e.g. radiation), cause major problems in the development of the nervous system. In addition, a large number of rare genetic conditions are associated with defects of CNS development, but these lie beyond the scope of this book.