Blood Groups and Transfusions
Blood groups
If samples of blood from different individuals are mixed together, some combinations result in red cells sticking together as clumps (Figure 9a). This is called agglutination, and occurs when the blood groups are incompatible. It is caused when antigens (or agglutinogens) on the red cell membrane react with specific antibodies (or agglutinins) in the plasma. If the quantity (or titre) of antibodies is sufficiently high, they bind to their antigens on several red cells and glue the cells together, which then rupture (haemolyse). If this occurs following a blood transfusion it can lead to anaemia and other serious complications. The most important blood groups are the ABO system and Rh (Rhesus) groups. 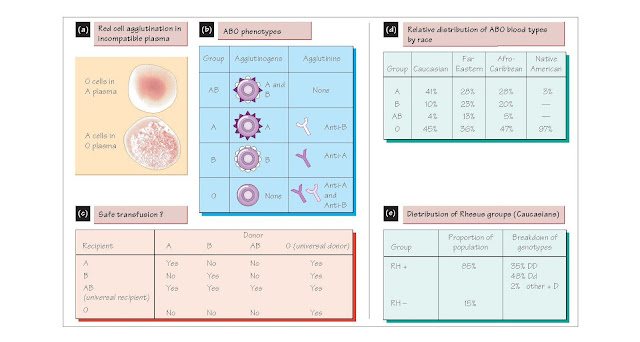 The ABO system
The ABO system consists of four blood groups: A, B, AB and
O. The precise group depends on the presence or absence of two antigens, A and B, on the red cells, and their respective antibodies, α and β, in the plasma (Figure 9b). The A and B antigens on red cells are mostly glycolipids that differ in respect of their terminal sugar. The antigens are also found as glycoproteins in other tissues, including salivary glands, pancreas, lungs and testes, and in saliva and semen.
Group A blood contains the A antigen and β antibody, and group B the B antigen and α antibody. Group AB has both A and B antigens, but neither antibody. Group O blood contains neither antigen, but both α and β antibodies. Group A blood cannot therefore be transfused into people of group B, or vice versa, because antibodies in the recipient react with their respective antigens on the donor red cells and cause agglutination (Figure 9c). As people of group AB have neither α nor β antibodies in the plasma, they can be transfused with blood from any group, and are called universal recipients. Group O red cells have neither antigen, and can therefore be transfused into any patient. People of group O are therefore called universal donors. Although group O blood contains both antibodies, this can normally be disregarded as they are diluted during transfusion and are bound and neutralized by free A or B antigens in the recipient’s plasma. If large or repeated transfusions are required, blood of the same group is used.

Inheritance of ABO blood groups
The expression of A and B antigens is determined genetically. A and B allelomorphs (alternative gene types) are dominant, and O recessive. Therefore AO (heterozygous) and AA (homozygous) genotypes both have group A phenotypes. An AB genotype produces both antigens, and is thus group AB. The proportion of each blood group varies according to race (Figure 9d), although group O is most common (35–50%). Native Americans are almost exclusively group O.

Rh groups
In ∼85% of the population the red cells have a D antigen on the membrane (Figure 9e). Such people are called Rh+ (Rhesus positive), while those who lack the antigen are Rh– (Rhesus negative). Unlike ABO antigens, the D antigen is not found in other tissues. The antibody to D antigen (anti-D agglutinin) is not normally found in the plasma of Rh−individuals, but sensitization and subsequent antibody production occurs if a relatively small amount of Rh+ blood is introduced. This can result from transfusion, or when an Rh− mother has an Rh+ child, and fetal red blood cells enter the maternal circulation during birth. Occasionally, fetal cells may cross the placenta earlier in the pregnancy.

Inheritance of Rh groups
The gene corresponding to the D antigen is also called D, and is dominant. When D is absent from the chromosome, its place is taken by the allelomorph of D called d, which is recessive. Individuals who are homozygous and heterozygous for D will be Rh+. About 50% of the population are heterozygous for D, and ∼35% homozygous. Blood typing for Rh groups is routinely performed for prospective parents to determine the likelihood of haemolytic disease in the offspring.

Haemolytic disease of the newborn
Most pregnancies with Rh–mothers and Rh+ fetuses are normal, but in some cases a severe reaction occurs. Anti-D antibody in the mother’s blood can cross the placenta and agglutinate fetal red cells expressing D antigen. The titre of antibody is generally too low to be of consequence during a first pregnancy with a Rh+ fetus, but it can be dangerously increased during subsequent pregnancies, or if the mother was previously sensitized with Rh+ blood. Agglutination of the fetal red cells and consequent haemolysis can result in anaemia and other complications. This is known as haemolytic disease of the newborn or erythroblastosis fetalis. The haemoglobin released is broken down to bilirubin, which in excess results in jaundice (yellow staining of the tissues). If the degree of agglutination and anaemia is severe, the fetus develops severe jaundice and is grossly oedematous (hydrops fetalis), and often dies in utero or shortly after birth.

Prevention and treatment In previously unsensitized mothers, sensitization can be prevented by treatment with anti-D immunoglobulin after birth. This destroys any fetal Rh+ red cells in the maternal circulation before sensitization of the mother can occur. If haemolytic disease is evident in the fetus or newborn, the Rh+ blood can be replaced by Rh− blood immediately after birth. By the time the newborn infant has regenerated its own Rh+ red cells, the anti-D antibody from the mother will have been reduced to safe levels. Phototherapy is commonly used for jaundice, as light converts bilirubin to a more rapidly eliminated compound.
Other blood groups
Although there are other blood groups, these are of little clinical importance, as humans rarely develop antibodies to the respective antigens. However, they may be of importance in medicolegal situations, such as determination of paternity. An example is the MN group, which is a product of two genes (M and N). A person can therefore be MM, MN or NN, each genome coming from one parent. As with the other groups, analysis of the respective parties’ genomes can only determine that the man is not the father. This method has been largely superceded by DNA profiling.

Complications of blood transfusions
Blood type incompatibility When the recipient of a blood trans- fusion has a significant plasma titre of α, β or anti-D antibodies, donor red cells expressing the respective antigen will rapidly agglutinate and haemolyse (haemolytic transfusion reaction). If the sub- sequent accumulation of bilirubin is sufficiently large, haemolytic jaundice develops. In severe cases renal failure may develop. Anti- bodies in the donor blood are rarely problematical, as they are diluted and removed in the recipient.

Transmission of infection as a result of bacteria, viruses and para- sites. Most important are hepatitis, HIV, prions and in endemic areas parasites such as malaria.

Iron overload resulting from frequent transfusions and break- down of red cells (transfusion haemosiderosis), for example in thalassaemia (see Chapter 6). Can cause damage to heart, liver, pancreas and glands. Treatment: iron chelators and vitamin C.

Fever resulting from an immune response to transfused leucocytes which release pyrogens. Relatively common but mild in patients who have previously been transfused, and in pregnancy.

Blood storage
Blood is stored for transfusions at 4°C in the presence of an agent that chelates free Ca2+ to prevent clotting; for example, citrate, oxalate and ethylenediaminetetraacetic acid (EDTA; see Chapter 7). Even under these conditions the red cells deteriorate, although they last much longer in the presence of glucose, which provides a metabolic substrate. The cell membrane Na+ pump works more slowly in the cold, with the result that Na+ enters the cell, and K+ leaves. This causes water to move into the cell so that it swells, and becomes more spherocytic. On prolonged storage the cells become fragile, and haemolyse (fragment) easily. Neither leucocytes nor platelets survive storage well, and disappear within a day of transfusion. Blood banks normally remove all the donor agglutinins (antibodies), although for small transfusions these would be sufficiently diluted to be of no threat. Great care is taken to screen potential donors for blood-borne diseases (e.g. hepatitis, HIV).