Thrombosis and Anticoagulants
Thrombosis
Thrombosis and embolism are ultimately the main cause of death in the industrialized world. Thrombosis is inappropriate activation of haemostasis, with clots (thrombi) forming inside blood vessels. If thrombi fragment they can be carried in the blood as emboli, and block downstream blood vessels causing infarction. Most commonly fatalities are due to thrombosis as a result of athero- sclerotic plaque rupture in acute coronary syndromes (see Chapter 42), or venous thromboembolism (VTE), particularly pulmonary embolism, following deep vein thrombosis (DVT). Virchow’s triad of endothelial damage, blood stasis and hypercoagulability predispose to thrombosis. Endothelial (or endocardial) damage is the most common cause of arterial thrombosis. Stasis (poor flow), which allows clotting factors to accumulate and unimpeded formation of thrombi, is the most common cause of DVT and VTE. Risk factors are shown in Figure 8a. Once formed, thrombi can undergo dissolution by fibrinolysis, propagation by accumulation of more fibrin and platelets, or organization with invasion of endothelial or smooth muscle cells and fibrosis. In recanalization channels form allowing blood to reflow. If not destroyed, thrombi may be incorporated into the vessel wall.

Antiplatelet drugs (Figure 8b)
Aspirin (acetylsalicylic acid) is the most important antiplatelet drug. It irreversibly inhibits cyclooxygenase (COX), the first enzyme in the sequence leading to formation of thromboxane A2 (TXA2) and prostacyclin (PGI2). TXA2 is produced by platelets and is a key platelet activator (see Chapter 7), whereas endothelium-derived PGI2 inhibits platelet activation and aggregation. Because aspirin inhibits COX irreversibly, production of PGI2 and TXA2 only recovers when new COX is produced via gene transcription. This cannot occur in platelets, which lack nuclei (see Chapter 5), whereas endothelial cells make new COX within hours. Aspirin therapy therefore produces a sustained increase in the PGI2: TXA2 ratio, suppressing platelet activation and aggregation. Aspirin can cause gastrointestinal bleeding.
Thienopyridine derivatives such as clopidogrel indirectly and irreversibly block purinergic P2Y receptors, and thus ADP-induced platelet activation (see Chapter 7); however, they are prodrugs that require metabolism in the liver, and so take >24 h for maximal effect. They are useful for aspirin-intolerant patients and preventing thrombi on coronary artery stents (see Chapter 42), and long- term treatment with clopidogrel plus aspirin is beneficial in acute coronary syndromes. New direct P2Y12 receptor antagonists such as ticagrelor and elinogrel have advantages including rapidity of action, and are effective for acute coronary syndrome.
Small peptide glycoprotein receptor inhibitors (GPI) such as tirofiban and eptifibatide and the monoclonal antibody abciximab prevent fibrinogen binding to GPIIb/IIIa receptors on activated platelets, thus inhibiting aggregation (see Chapter 7). In patients with unstable angina or undergoing high-risk angioplasty, a GPI combined with aspirin and heparin reduces short-term mortality, and the need for urgent revascularization. 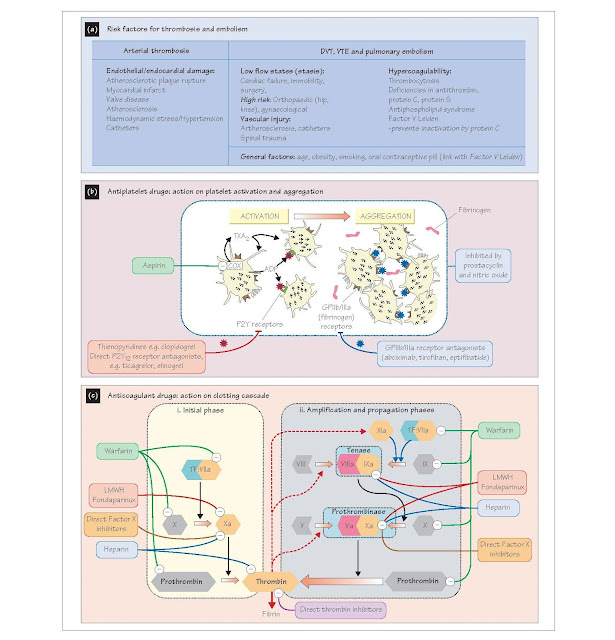 Anticoagulant drugs (Figure 8c)
Heparin, a mixture of mucopolysaccharides derived from mast cells, activates antithrombin, which inhibits thrombin and factors X, IX and XI (see Chapter 7). Heparin must bind to both thrombin and antithrombin for inhibition of thrombin, but only antithrombin for inhibition of factor X. Unfractionated heparin has a large vari- ability of action and causes thrombocytopenia in some patients. Low molecular weight heparins (LMWHs) have largely replaced unfractionated heparin in clinical use, as they have a longer half-life and predictable dose responses; thrombocytopenia is rare. LMWHs only bind to antithrombin, and are therefore more effective at inhibiting factor X. They are given subcutaneously, and are first line drugs for routine thromboprophylaxis. Fondaparinux is a synthetic pentasaccharide that acts in a similar fashion to LMWH. Bivalirudin is a direct thrombin inhibitor delivered intravenously, with benefits of rapidity of action and reversal.
Warfarin (coumarin) is currently the most important oral anti- coagulant. It inhibits vitamin K reductase, and thus γ-carboxylation of prothrombin and factors VII, IX and X in the liver; this prevents tethering to cells and hence activity (see Chapter 7). Warfarin is only effective in vivo. Although slow in onset (∼1–2 days), it provides effective support for ∼5 days. Numerous factors including disease and drugs affect the sensitivity to warfarin, so blood tests must be used routinely to monitor dosage, which is adjusted to give a prothrombin time international normalized ratio (INR) of ∼3 (see below). Use of warfarin may decline following the advent of oral direct thrombin (e.g. dabigatran) and factor Xa antagonists (e.g. rivaroxaban). These have benefits of increased rapidity of action and reduced sensitivity to other drugs and disease, and a greatly reduced need for routine blood tests. Both are approved for prevention of VTE following hip and knee replacement surgery, and have been shown to be as effective as warfarin for prevention of atrial fibrillation-associated stroke.
Thrombolytic agents induce fibrinolysis by activating plasmin; tissue plasminogen activator (tPA) is the most important endogenous agent (see Chapter 7), and recombinant tPA the most commonly used clinically. Until relatively recently, thrombolysis was the recognized treatment for dissolution of life-threatening blood clots in coronary artery disease and acute MI, although with a severe risk of gut and intracerebral haemorrhage (stroke). It has now been largely replaced by emergency angioplasty – percutaneous coronary intervention (PCI) (see Chapter 43).

Some laboratory investigations
Prothrombin time (PT): time to clot formation following addition of thromboplastin (TF) (fibrinogen and Ca2+ in excess); normally ∼14 s. A measure of activity of vitamin K-dependent clotting factors, and thus important for titrating dose of warfarin (see above). It is expressed as INR, the ratio of the patient’s PT to that of a standardized reference sample. INR is normally 1.
Activated partial thromboplastin time (aPTT): time to clot formation following addition of a surface activator (kaolin; activates factor XII), phospholipid and Ca2+ to plasma. Measures activity of factors in the amplification phase (i.e. not factor VIIa) (see Figure 7b). Normally 35–45 s. Prolonged by relevant deficiencies.
D-dimers and f﻿ibrin degradation products (FDPs): indicative of fibrinolysis; raised in disseminated intravascular coagulation (DIC) and other thrombotic conditions. False positives common.