Haemostasis
Primary haemostasis (Figure 7a)
The immediate response to damage of the blood vessel wall is vasoconstriction, which reduces blood flow. This is followed by a sequence of events leading to sealing of the wound by a clot. Collagen in the exposed subendothelial matrix binds von Willebrand factor (vWF), which in turn binds to glycoprotein Ib (GPIb) receptors on platelets, the first stage of platelet adhesion. This initial tethering promotes binding of platelet integrin α2β1 and GPVI receptors directly to collagen. Binding of receptors initiates activation, partly by increasing intracellular Ca2+. Platelets change shape, put out pseudopodia and make thromboxane A2 (TXA2) via cyclooxygenase (COX). TXA2 releases mediators from platelet dense granules, including serotonin (5-HT) and adenosine diphosphate (ADP), and from α granules vWF, factor V (see below) and agents that promote vascular repair. TXA2 and 5-HT also promote vasoconstriction. ADP activates more platelets via P2Y12 purinergic receptors, causing activation of fibrinogen (GPIIb/IIIa) receptors and exposure of phospholipid (PLD) on the platelet surface. Plasma fibrinogen binds to GPIIb/IIIa receptors causing the platelets to aggregate (stick together) forming a soft platelet plug (Figure 7a). This is stabilized with fibrin during clotting. Note that thrombin (see below) is also a potent platelet activator.


Formation of the blood clot (Figures 7b,c)
The final stage of blood clotting (coagulation) is formation of the clot – a tight mesh of fibrin entrapping platelets and blood cells. The process is complex, involving sequential conversion of proenzymes to active enzymes (factors; e.g. factor X → Xa). The ultimate purpose is to produce a massive burst of thrombin (factor IIa), a protease that cleaves fibrinogen to fibrin. The cell-based model of clotting (Figure 7b) has replaced the older extrinsic and intrinsic pathways. Most of the action in this model occurs on the cell surface (hence its name).
The initial phase of clotting is initiated when cells in the subendothelial matrix that bear tissue factor (TF; thromboplastin) are exposed to factor VIIa from plasma. Such cells include fibroblasts and monocytes, but damaged endothelium and circulating cell fragments containing TF (microparticles) can also initiate clotting. TF forms a complex with factor VIIa (TF:VIIa) which activates factor X (and IX, see below). Factor Xa with its cofactor Va then converts prothrombin (factor II) to thrombin; activation of both factor X and prothrombin require Ca2+. Comparatively little thrombin is produced at this time, but sufficient to initiate the amplification phase. Activity of these processes is normally sup- pressed by tissue factor pathway inhibitor (TFPI), which inhibits and forms a complex with factor Xa, which then inhibits TF:VIIa; however, the influx of plasma factors after damage overwhelms this suppression.
The amplification phase (sometimes viewed as part of the propagation phase) takes place on platelets (Figure 7b). Thrombin produced in the initial phase activates further platelets, and mem- brane-bound factor V which is released from platelet α granules. Factor VIII is normally bound to circulating vWF, which protects it from degradation. Thrombin cleaves factor VIII from vWF and activates it, when it binds to the platelet membrane.
The scene is now set for the propagation phase. Either factor XIa (itself activated by thrombin) or TF:VIIa can activate factor IX, which binds and forms a complex with factor VIIIa on the platelet membrane called tenase; this is a much more powerful activator of factor X than TF:VIIa. Factors Xa and Va then bind to form prothrombinase on the platelet membrane. This process leads to a massive burst of thrombin production, 1000-fold greater than in the initial phase and localized to activated platelets.
Factor XII (Hageman factor, not shown) is probably of limited significance, as deficiency does not lead to bleeding. It is activated by negative charge on glass and collagen, and can activate factor XI. It may be involved in pathological clotting in the brain.
Thrombin cleaves small fibrinopeptides from fibrinogen to form fibrin monomers (Figure 7c), which spontaneously polymerize. This polymer is cross-linked by factor XIIIa (activated by thrombin in the presence of Ca2+) to create a tough network of fibrin fibres and a stable clot. Retraction of entrapped platelets contracts the clot by ∼60%, making it tougher and assisting repair by drawing the edges of the wound together. 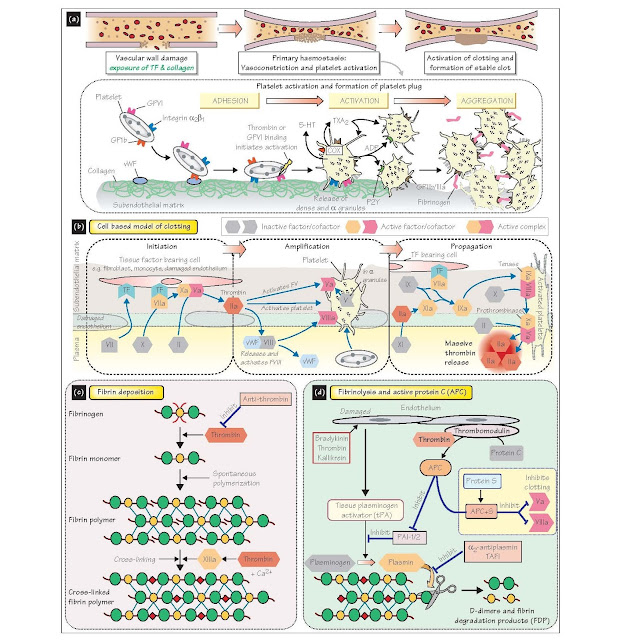 Inhibitors of haemostasis and f﻿ibrinolysis Inhibitory mechanisms are vital to prevent inappropriate clotting (thrombosis). Prostacyclin (PGI2) and nitric oxide from undam- aged endothelium impede platelet adhesion and activation. Anti-thrombin inhibits thrombin, factor Xa and IXa/tenase; its activity is strongly potentiated by heparin, a polysaccharide. Heparan on endothelial cells is similar. TFPI has already been mentioned. Thrombomodulin on endothelial cells binds thrombin and prevents it cleaving fibrinogen; instead, it activates protein C (APC) which with its cofactor protein S inactivates cofactors Va and VIIIa, and hence tenase and prothrombinase (Figure 7d).
Fibrinolysis is the process by which a clot is broken down by plasmin, a protease (Figure 7d). This creates soluble fibrin degradation products (FDPs) including small D-dimers. Plasmin is formed from fibrin-bound plasminogen by tissue plasminogen activator (tPA), released from damaged endothelial cells in response to bradykinin, thrombin and kallikrein. Urokinase (uPA) is similar. APC inactivates an inhibitor of plasminogen activator inhibitor (tPA; PAI-1 and 2), and so promotes fibrinolysis (Figure 7d).
Plasmin is itself inactivated by α2-antiplasmin, and inhibited by thrombin activated fibrinolysis inhibitor (TAFI).

Defects in haemostasis
The most common hereditary disorder is haemophilia A, a deficiency of factor VIII sex linked to males. Christmas disease is a deficiency of factor IX, and von Willebrand disease a deficiency of vWF. The latter leads to defective platelet adhesion and reduced availability of factor VIII, which is stabilized by vWF. The liver requires vitamin K for correct synthesis of prothrombin and factors VII, IX and X. As vitamin K is obtained from intestinal bacteria and food, disorders of fat absorption or liver disease can result in deficiency and defective clotting. Factor V Leiden is brought about by a mutant factor V that cannot be inactivated by APC. Five per cent carry the gene, which causes a fivefold increase in the risk of thrombosis. Antiphospholipid syndrome is caused by phospholipid- binding antibodies (e.g. cardiolipin, lupus anticoagulant) which may inhibit APC and protein S, or facilitate cleavage of pro- thrombin. It is associated with recurrent thrombosis and linked to 20% of strokes in people under 50 years, more common in females.