Erythropoiesis begins when uncommitted stem cells commit to the erythrocyte lineage and under the influence of erythropoietin transform into rapidly growing precursor cells (colony forming unit erythroid cells, CFU-E) and then proerythroblasts (Figure 6). These large cells are packed with ribosomes, and it is here that haemoglobin synthesis begins. Development and maturation proceeds through early (basophilic), intermediate (polychromatic) and finally late (orthochromatic) erythroblasts (or normoblasts) of decreasing size. As cell division ceases, ribosomal content decreases and haemoglobin increases. The late erythroblast finally loses its nucleus to become a reticulocyte, a young erythrocyte still retaining the vestiges of a ribosomal reticulum. Reticulocytes enter the blood and, as they age, the reticulum disappears and the characteristic biconcave shape develops. About 2 × 1011 erythrocytes are produced from the marrow each day, and normally 1–2% of circulating red cells are reticulocytes. This increases when erythropoiesis is enhanced, for example by increased erythropoietin due to hypoxia associated with respiratory disease or altitude. This can greatly increase erythrocyte numbers (polycythaemia) and haematocrit. Conversely, erythropoietin levels may fall in kidney disease, chronic inflammation and liver cirrhosis, resulting in anaemia.
Erythrocytes are destroyed by macrophages in the liver and spleen after ∼120 days. The spleen also sequesters and eradicates defective erythrocytes. The haem group is split from haemoglobin and converted to biliverdin and then bilirubin. The iron is con- served and recycled via transferrin, an iron transport protein, or stored in ferritin. Bilirubin is a brown–yellow compound that is excreted in the bile. An increased rate of haemoglobin breakdown results in excess bilirubin, which stains the tissues (jaundice). 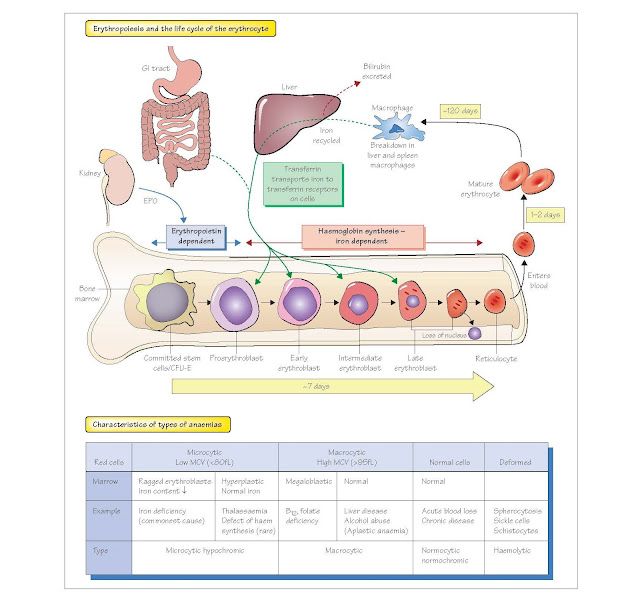 Haemoglobin
Haemoglobin has four subunits, each containing a polypeptide globin chain and an iron-containing porphyrin, haem, which are synthesized separately. Haem is synthesized from succinic acid and glycine in the mitochondria, and contains one atom of iron in the ferrous state (Fe2+). One molecule of haemoglobin has therefore four atoms of iron, and binds four molecules of O2. There are several types of haemoglobin, relating to the globin chains; the haem moiety is unchanged. Adult haemoglobin (Hb A) has two α and two β chains. Fetal haemoglobin (Hb F) has two γ chains in place of the β chains, and a high affinity for O2. Haemoglobinopathies are due to abnormal haemoglobins.
Sickle cell anaemia occurs in 10% of the Black population, and is caused by substitution of a glutamic acid by valine in the β chain; this haemoglobin is called Hb S. At a low Po2 Hb S gels, causing deformation (sickling) of the erythrocyte. The cell is less flexible and prone to fragmentation, and there is an increased rate of breakdown by macrophages. Heterozygous patients with less than 40% Hb S normally have no symptoms (sickle cell trait). Homozygous patients with more than 70% Hb S develop full sickle cell anaemia, with acute episodes of pain resulting from blockage of blood vessels, congestion of liver and spleen with red cells, and leg ulcers.
Thalassaemia involves defective synthesis of α- or β-globin chains. Several genes are involved. In β thalassaemia there are fewer or no β chains available, so α chains bind to γ (Hb F) or δ chains (Hb A2). Thalassaemia major (severe β thalassaemia) causes severe anaemia, and regular transfusions are required, leading to iron overload. In heterozygous β thalassaemia minor there are no symptoms, although erythrocytes are microcytic and hypochromic, i.e. mean cell volume (MCV), mean cell haemoglobin content (MCH) and mean cell haemoglobin concentration (MCHC) are reduced. In α thalassaemia there are fewer or no α chains. In the latter case haemoglobin does not bind O2, and infants do not survive (hydrops fetalis). When some α chains are present, patients surviving as adults may produce some Hb H (four β chains); this precipitates in the red cells which are then destroyed in the spleen.

Anaemia
Blood loss (e.g. haemorrhage, heavy menstruation) or chronic disease (e.g. infection, tumours, renal failure) may simply reduce the number of erythrocytes. When these have a normal MCV and MCH (see Chapter 5), this is termed normocytic normochromic anaemia.
Iron deficiency is the most common cause of anemia. The dietary requirement for iron is small, as the body has an efficient recycling system, but is increased with significant blood loss. Women have a higher requirement for dietary iron than men because of men- struation, and also during pregnancy. Iron deficiency causes defective haemoglobin formation and a microcytic hypochromic anaemia (reduced MCV and MCH).
Vitamin B12 (cobalamin) and folate are required for maturation of erythroblasts, and deficiencies of either cause megaloblastic anaemia. The erythroblasts are unusually large (megaloblasts), and mature as erythrocytes with a high MCV and MCH, although MCHC is normal. Erythrocyte numbers are greatly reduced, and rate of destruction increased. Folate deficiency is mostly related to poor diet, particularly in the elderly or poor; folate is commonly given with iron during pregnancy. Alcoholism and some anticonvulsant drugs (e.g. phenytoin) impairs folate utilization. Pernicious anaemia is caused by defective absorption of vitamin B12 from the gut, where it is transported as a complex with intrinsic factor produced by the gastric mucosa. Damage to the latter results in pernicious anaemia. B12 deficiency can also occur in strict vegans. Aplastic anaemia results from aplastic (non-functional) bone marrow and causes pancytopenia (reduced red, white and platelet cell count). It is dangerous but uncommon. It can be caused by drugs (particularly anticancer), radiation, infections (e.g. viral hepatitis, TB) and pregnancy, where it has a 90% mortality. A rare inherited condition, Fanconi’s anaemia, involves defective stem cell production and differentiation.
Haemolytic anaemia involves an excessive rate of erythrocyte destruction, and thus causes jaundice. Causes include blood transfusion mismatch, haemolytic anaemia of the newborn (see Chapter 9), abnormal erythrocyte fragility and haemoglobins, and autoimmune, liver and hereditary diseases. In hereditary haemolytic anaemia (familial spherocytosis) erythrocytes are more spheroid and fragile, and are rapidly destroyed in the spleen. It is relatively common, affecting 1 in 5000 Caucasians. Jaundice is common at birth but may appear after several years. Aplastic anaemia may occur after infections, and megaloblastic anaemia from folate deficiency as a result of high bone marrow activity.