Electrical Conduction System In The Heart


Electrical Conduction System In The Heart
Electrical conduction in cardiac muscle (Figure 13a) Cardiac muscle cells are connected via intercalated discs (see Chapter 2). These incorporate regions where the membranes of adjacent cells are very close, called gap junctions. Gap junctions consist of proteins known as connexons, which form low-resistance junctions between cells. They allow the transfer of small ions and thus electrical current. As all cells are therefore electrically connected, cardiac muscle is said to be a functional (or electrical) syncytium. If an action potential (AP) is initiated in one cell, local currents via gap junctions will cause adjacent cells to depolarize, initiating their own AP. A wave of depolarization will therefore be conducted from cell to cell throughout the myocardium. The rate of conduction is partly dependent on gap junction resistance and the size of the depolarizing current. This is related to the upstroke velocity of the AP (phase 0). Drugs that slow phase 0 therefore slow conduction (e.g. lidocaine, class I antiarrhythmics). Pathological conditions such as ischaemia may increase gap junction resistance, and slow or abolish conduction. Retrograde conduction does not normally occur because the original cell is refractory (see Chapter 11). Transfer of the pacemaker signal from the sinoatrial node (SAN) and synchronous contraction of the ventricles is facilitated by conduction pathways formed from modified muscle cells. 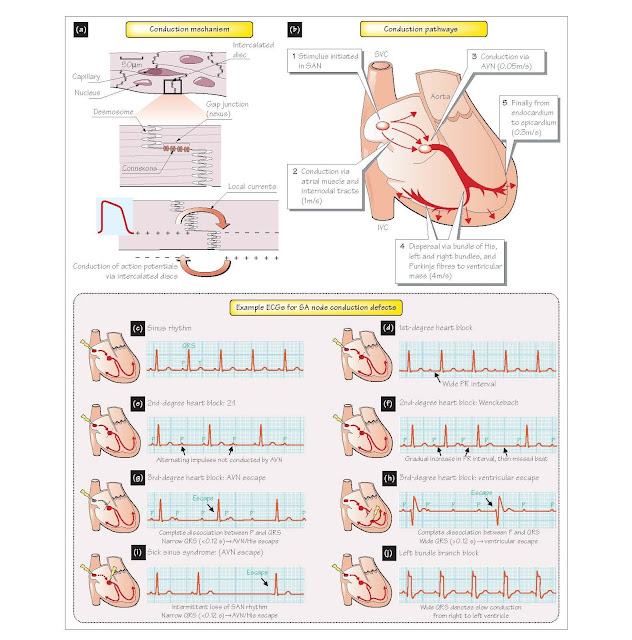 Conduction pathways in the heart
(Figure 13b)
Sinoatrial node
The heart beat is normally initiated in the SAN, located at the junction of the superior vena cava and right atrium. The SAN is a ∼2-mm-wide group of small elongated muscle cells that extends for ∼2 cm down the sulcus terminalis. It has a rich capillary supply and sympathetic and parasympathetic (right vagal) nerve endings. The SAN generates an AP about once a second (sinus rhythm, Figure 13c; see Chapter 11).

Atrial conduction
The impulse spreads from the SAN across the atria at ∼1 m/s. Conduction to the atrioventricular node (AVN) is facilitated by larger cells in the three internodal tracts of Bachmann (anterior), Wenckebach (middle) and Thorel (posterior).

The atrioventricular node
The atria and ventricles are separated by the non-conducting annulus fibrosus. The AVN marks the upper region of the only conducting route through this band. It is similar in structure to the SAN, situated near the interatrial septum and mouth of the coronary sinus, and innervated by sympathetic and left vagal nerves. The complex arrangement of small cells and slow AP upstroke (see
Chapter 11) result in a very slow conduction velocity (∼0.05 m/s). This provides a functionally significant delay of ∼0.1 s between contraction of the atria and ventricles, reflected by the PR interval of the electrocardiogram (ECG; see Chapter 14). Sympathetic stimulation increases conduction velocity and reduces the delay, whereas vagal stimulation slows conduction and increases the delay.

Bundle of His and Purkinje system
The bundle of His transfers the impulse from the AVN to the top of the interventricular septum. Close to the attachment of the tricuspid septal cusp it branches to form the left and right bundle branches. The left bundle divides into the posterior and anterior fascicles. The bundles travel under the endocardium down the walls of the septum, and at the base divide into the multiple fibres of the Purkinje system. This distributes the impulse over the inner walls of the ventricles. Cells in the bundle of His and Purkinje system have large diameters (∼40 µm) and rapid AP upstroke, and consequently fast conduction (∼4 m/s). The impulse spreads from the Purkinje cells through the endocardium towards the epicardium at 0.3–1 m/s, thereby initiating contraction.

Heart block Abnormally slow conduction in the AVN can result in incomplete (first-degree) heart block (AV block; Figure 13d), where the delay is greater than normal, resulting in an extended PR interval. Second-degree heart block occurs when only a fraction of impulses from the atria are conducted; for example, ventricular contraction is only initiated every second or third atrial contraction (2:1 or 3:1 block; Mobitz II; Figure 13e). Wenckebach block (Mobitz I) is another type of second-degree block, in which the PR interval progressively lengthens until there is no transmission from atria to ventricles and a QRS complex is missed; the cycle then begins again (Figure 13f). Patients with first or second- degree block are often asymptomatic. Complete (third-degree) heart block occurs when conduction between atria and ventricles is abolished (Figure 13g,h). This can result from ischaemic damage to nodal tissue or the bundle of His. In the absence of a signal from the SAN, the AVN and bundle of His can generate a heart rate of ∼40 beats/min (see Chapter 11). Some ventricular cells spontaneously generate APs, but at a rate less than 20/min.

Bundle branch block When one branch of the bundle of His does not conduct (left or right bundle branch block), the part of the ventricle that it serves will be stimulated by conduction through the myocardium from unaffected areas. As this form of conduction is slower, activation is delayed and the QRS complex broadened, often with a more prominent Q wave (Figure 13j).