Regulation of contraction by Ca2+ and myosin phosphorylation (see shaded area in left cell of Figure 15) Vasoconstricting stimuli initiate VSM cell contraction by increasing [Ca2+]i from its basal level of ∼100 nmol/L. Force development is proportional to the increase in [Ca2+]i, with maximal contraction occurring at ∼1 µmol/L [Ca2+]i. The rise in [Ca2+]i promotes its binding to the cytoplasmic regulatory protein calmodulin (CaM). Once a calmodulin molecule has bound four Ca2+ ions, it can activate the enzyme myosin light-chain kinase (MLCK). MLCK in turn phosphorylates two 20-kDa subunits (‘light chains’) contained within the ‘head’ of each myosin molecule. Phosphorylated myosin then forms crossbridges with actin, using ATP hydrolysis as an energy source to produce contraction. Actin–myosin interactions during crossbridge cycling are similar to those in cardiac myocytes (see Chapter 12).
The degree of myosin light-chain phosphorylation, which determines crossbridge turnover, is a balance between the activity of MLCK and a myosin light-chain phosphatase which dephosphorylates the light chains. Once [Ca2+]i falls, MLCK activity diminishes and relaxation occurs as light-chain phosphorylation is returned to basal levels by the phosphatase.
VSM cells in vivo maintain a tonic level of partial contraction that varies with fluctuations in the vasoconstricting and vasodilating influences to which they are exposed. VSM cells avoid fatigue during prolonged contractions because their rate of ATP consumption is 300-fold lower than that of skeletal muscle fibres. This is possible because the crossbridge cycle is much slower than in striated muscles. The maximum crossbridge cycling rate of smooth muscle during shortening is only about one-tenth of that in striated muscles, as a result of differences in the types of myosin present. In addition, once they have shortened, vascular cells can maintain contraction with an even lower expenditure of ATP because the myosin crossbridges remain attached to actin for a longer time, thus ‘locking in’ shortening. 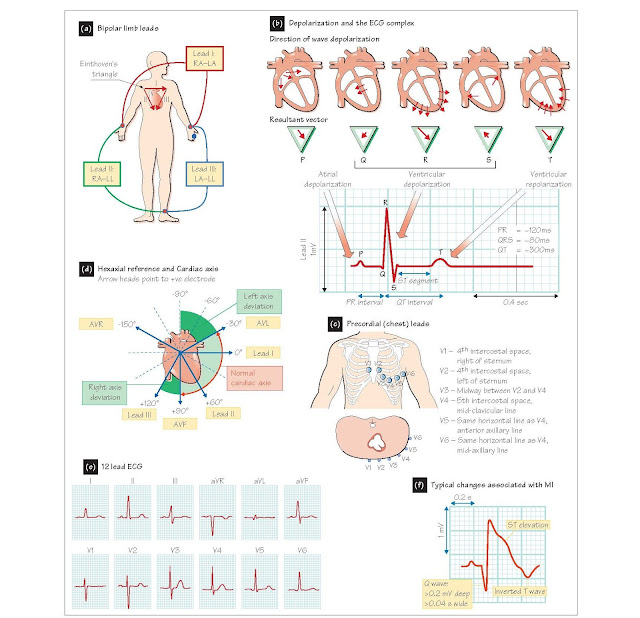 Vasoconstricting mechanisms
The binding to receptors of noradrenaline and other important vasoconstrictors such as endothelin, thromboxane A2, angiotensin II and vasopressin stimulates VSM contraction via common G- protein-mediated pathways (see left cell).

Effects of IP3 and diacylglycerol
Binding of vasoconstrictors to receptors activates the G-protein Gq, which stimulates the enzyme phospholipase C. Phospholipase C splits the membrane phospholipid phosphatidylinositol 1,4- bisphosphate (PIP2), generating the second messengers inositol 1,4,5-triphosphate (IP3), and diacylglycerol (DAG). IP3 binds to and opens Ca2+ channels on the membrane of the sarcoplasmic reticulum (SR). This allows Ca2+, which is stored in high concentrations within the SR, to flood out into the cytoplasm and rapidly increase [Ca2+]i. DAG activates protein kinase C (PKC). This activates the protein CPI-17, which phosphorylates and inhibits myosin phosphatase, promoting contraction.
Ca2+ influx mechanisms
Vasoconstrictors also cause membrane depolarization via several mechanisms. First, the release of SR Ca2+, which they initiate, opens Ca2+-activated chloride channels in the plasma membrane. Second, vasoconstrictors may act via DAG and PKC to cause depolarization by inhibiting the activity of K+ channels. Third, vasoconstrictors induce both membrane depolarization and Ca2+ entry into VSM cells by opening receptor-gated cation channels, which allow the influx of both Na+ and Ca2+ ions. The identities of the proteins making up the Ca2+-activated chloride and receptorgated cation channels remained elusive for many years, but these channels have recently been proposed to be formed from anoctamin and TRPC (transient receptor potential canonical) proteins, respectively.
The membrane depolarization elicited by vasoconstrictors opens L-type voltage-gated Ca2+ channels (also termed CaV 1.2 channels) similar to those found in cardiac myocytes. With sufficient depolarization, some blood vessels may fire brief Ca2+ channel-mediated APs that cause transient contractions. More often, however, vasoconstrictors cause graded depolarizations, during which sufficient Ca2+ influx occurs to cause more sustained contractions. Vasoconstrictors further enhance Ca2+ influx through L-type channels by evoking channel phosphorylation. Furthermore, depletion of Ca2+ from the SR due to the action of IP3 opens store-operated Ca2+ (SOC) channels in the cell membrane which admit both Na+ and Ca2+ into the cell. The identities of the proteins forming SOC channels remain in dispute.
As well as raising [Ca2+]i, vasoconstrictors also promote contraction by a process termed Ca2+ sensitization. Ca2+ sensitization is caused by the inhibition of myosin phosphatase. This increases myosin light-chain phosphorylation, and therefore force development, even with minimal increases in [Ca2+]i and MLCK activity.
Although PKC has this effect (see above), phosphatase inhibition is primarily caused by RhoA kinase, an enzyme stimulated by the ras type G-protein RhoA, which is activated by vasoconstrictors by an as yet unknown mechanism.
The relative importance of the excitatory mechanisms listed above varies between different vasoconstrictors and vascular beds. In resistance arteries depolarization and Ca2+ influx through volt- age-gated channels are probably most important.
Ca2+ removal and vasodilator mechanisms (see right cell of Figure 15) Several mechanisms serve to remove Ca2+ from the cytoplasm. These are continually active, allowing cells both to recover from stimulation and to maintain a low basal [Ca2+]i in the face of the enormous electrochemical gradient tending to drive Ca2+ into cells even when they are not stimulated. The smooth endoplasmic reticulum Ca2+-ATPase (SERCA) pumps Ca2+ from the cytoplasm into the SR. This process is referred to as Ca2+ sequestration. An analogous plasma membrane Ca2+-ATPase (PMCA) pumps Ca2+ from the cytoplasm into the extracellular space (Ca2+ extrusion). Cells also extrude Ca2+ via a Na+-Ca2+ exchanger (NCX) located in the cell membrane, which is similar to that found in cardiac cells (see Chapter 12). The NCX may be localized to areas of the plasma membrane that are approached closely by the SR, allowing any Ca2+ leaking from the SR to be quickly ejected from the cell without causing tension development. Interestingly, when the intracellular Na+ concentration near the cell membrane is sufficiently raised due to the opening of receptor-gated or store-operated channels, the NCX may act in reverse mode, thereby becoming a pathway for Ca2+ influx rather than extrusion.
Most vasodilators acting on smooth muscle cells cause relaxation by activating either the cyclic GMP (e.g. nitric oxide, atrial natriuretic peptide) or cyclic AMP (e.g. adenosine, prostacyclin, β-receptor agonists) second messenger systems. Both second mes- sengers activate kinases, which act by phosphorylating overlap pingsetsofcellularproteins. cGMPactivates cyclic GMP-dependent protein kinase (protein kinase G, PKG). PKG has multiple vasodilating effects. It activates K+ channels by phosphorylating them, leading to a membrane hyperpolarization that inhibits Ca2+ influx by switching off voltage-gated Ca2+ channels, a fraction of which are open even at the resting membrane potential. PKG also stimulates the sequestration and extrusion of Ca2+ sequestration by activating the Ca2+ pumps, and it stimulates myosin phophatase by inhibiting Rho kinase.
Cyclic AMP exerts its effects via cyclic AMP-dependent protein kinase (protein kinase A, PKA), although high levels of cAMP have also been shown to stimulate PKG. PKA lowers [Ca2+]i by stimulating Ca2+ pumps, and also by opening K+ channels (again via phosphorylation). The stimulation of SERCA by PKA, which loads the SR with Ca2+, may also indirectly activate Ca2+-activated K+ (BKCa) channels by increasing the frequency of ‘Ca2+ sparks’. These are transient elevations of [Ca2+]i near the cell membrane caused by the opening of ryanodine receptors (RyRs) and the consequent release of Ca2+ from the SR. PKA can also phosphorylate MLCK, thereby inhibiting its activity. However, the contribution of this mechanism to relaxation under physiological conditions is controversial.