Electrophysiology Of Cardiac Muscle And Origin Of The Heart Beat


Electrophysiology Of Cardiac Muscle And Origin Of The Heart Beat
An action potential (AP) is the transient depolarization of a cell as a result of activity of ion channels. The cardiac AP is considerably longer than those of nerve or skeletal muscle (∼300 vs ∼2 ms). This is due to a plateau phase in cardiac muscle, lasting for 200–300 ms. 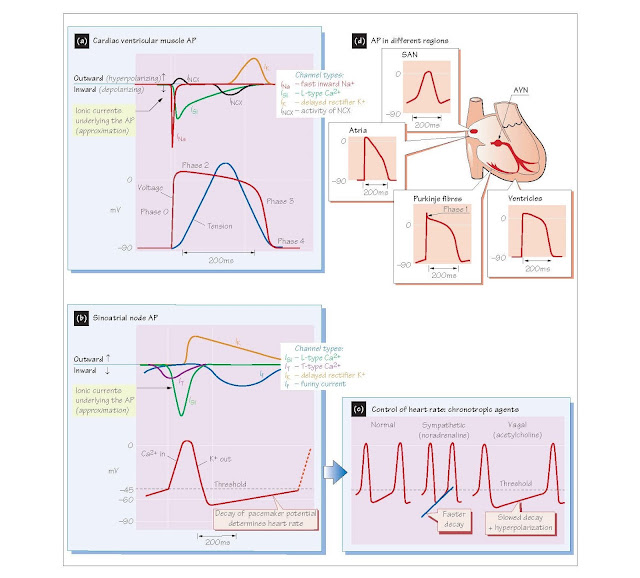 Initiation of the action potential
At rest, the ventricular cell membrane is most permeable to K+ and the resting membrane potential (RMP) is therefore close to the K+ equilibrium potential (EK), ∼–90 mV (see Chapter 10). An AP is initiated when the membrane is depolarized to the threshold potential (∼−65 mV). This occurs due to transmission of a depolarizing current from an adjacent activated cell through gap junctions (see Chapter 2). At threshold, sufficient voltage-gated Na+ channels are activated to initiate a self-regenerating process – the inward current caused by entry of Na+ (INa) through these channels causes further depolarization, which activates more Na+ channels, and so on. The outcome is a very large and fast INa, and therefore a very rapid AP upstroke (phase 0; ∼500 V/s).
Activation of Na+ channels during phase 0 means that the Na+ permeability is now much greater than that for K+, and so the membrane potential moves towards the Na+ equilibrium potential (ENa, ∼+65 mV) (see Chapter 10). It does not reach ENa because the Na+ channels rapidly inactivate as the potential nears +40 mV (see Chapter 10); this, and activation of a transient outward K+ current, can lead to a rapid decline in potential, leaving a spike (phase 1), best seen in Purkinje fibres (Figure 11d). The inactivated Na+ channels cannot be reactivated until the potential returns to less than −60 mV, so another AP cannot be initiated until the cell repolarizes (refractory period). The refractory period therefore lasts as long as the plateau and contraction (Figure 11a), so unlike skeletal muscle, cardiac muscle cannot be tetanized.

The plateau (phase 2)
By the end of the upstroke all Na+ channels are inactivated, and in skeletal muscle the cell would now repolarize. In cardiac muscle, however, the potential remains close to 0 mV for ∼250 ms. This plateau phase is due to opening of voltage-gated (L-type) Ca2+ channels, which activate relatively slowly when the membrane potential becomes more positive than ∼−35 mV. The resultant Ca2+ current (slow inward or ISI) is sufficient to slow repolarization until the potential falls to ∼−20 mV. The length of the plateau is related to slow inactivation of Ca2+ channels and the additional Na+ inward current provided by the Na+–Ca2+ exchanger (see below). Ca2+ entry during the plateau is vital for cardiac muscle contraction (see Chapter 12).

Repolarization (phase 3)
By the end of the plateau the membrane potential is sufficiently negative to activate delayed rectifier K+ channels, and the associated outward K+ current (IK) therefore promotes rapid repolarization. As the membrane potential returns to resting levels (phase 4), IK slowly inactivates again. Factors that influence IK will affect the rate of repolarization, and hence the AP length (see Chapter 51), and mutations in the underlying channels cause long QT syndrome (see Chapter 55).

Role of Na+–Ca2+ exchange
The Na+–Ca2+ exchanger (NCX) exchanges three Na+ for one Ca2+, and is thus electrogenic (see Chapter 10). In the early plateau, when membrane potential is most positive, the NCX may reverse and contribute to inward current and movement of Ca2+. As the plateau decays and becomes more negative NCX returns to its usual function of expelling Ca2+ from the cell in exchange for Na+, which is potentiated by the high cytosolic [Ca2+]. This influx of Na+ ions causes an inward current (INCX) that slows repolarization and lengthens the plateau.

Sinoatrial node
The sinoatrial node (SAN) is the origin of the heart beat, and its AP differs from that of the ventricle (Figure 11b). The resting potential (phase 4) exhibits a slow depolarization, and the upstroke (phase 0) is much slower. The latter is because there are no functional Na+ channels, and the upstroke is due instead to activation of slow L-type Ca2+ channels. The slow upstroke leads to slower conduction between cells (see Chapter 13). This is of particular importance in the atrioventricular node (AVN), which has a similar AP to the SAN.
The SAN resting potential slowly depolarizes from ∼−60 mV to a threshold of ∼−40 mV, at which point L-type channels activate and an AP is initiated; the threshold is more positive because of substitution of L-type for Na+ channels. The rate of decay deter-mines how long it takes for threshold to be reached, and therefore the heart rate. The resting potential is therefore commonly called the pacemaker potential. As for ventricular cells, repolarization of the AP in SAN involves activation of IK, which then slowly inactivates. In addition, there are two inward currents, Ib and If (‘funny’), mostly due to inward movement of Na+. Ib is stable, and present in other cardiac cells, but If is specific to nodal cells, and activated at the end of repolarization by negative potentials (Figure 11b). The combination of inward current from If plus Ib and decay in IK causes the slow depolarization of the pacemaker potential. As this approaches threshold, another type of voltage- gated Ca2+ channel (transient, T-type) is activated, which contributes to the depolarization and the early part of the upstroke.
Factors influencing IK, Ib, or If thus alter the slope of the pace- maker and so heart rate, and are called chronotropic agents. The sympathetic neurotransmitter noradrenaline increases heart rate by increasing the size of If. It also reduces AP length by increasing the rate of Ca2+ entry and hence the slope of the upstroke. The parasympathetic transmitter acetylcholine reduces the slope of the pacemaker potential and causes a small hyperpolarization, both of which increase the time required to reach threshold and reduce heart rate (Figure 11c).
Other regions of the heart (Figure 11d)
Atrial muscle has a similar AP to ventricular muscle, although the shape is more triangular. Purkinje fibres in the conduction system have a prominent phase 1, reflecting a greater INa (due to their large size); the latter causes a more rapid upstroke, and faster conduction. APs in the AVN are similar to those of the SAN, although the rate of decay of the resting potential is slower. The resting potential of the bundle of His and Purkinje system may also exhibit an even slower rate of decay (due to decay of IK). All of these could therefore act as pacemakers, but the SAN is normally faster and. This is called dominance or overdrive suppression.