pediagenosis    September 15, 2018    Cardiovascular , Organ
The Electrocardiogram
The electrocardiogram (ECG) is the surface recording of electrical activity of the heart as the cardiac muscle depolarizes and repolarizes (see Chapters 11 and 13). The recorded voltage (1–2 mV) is much smaller than that of the action potential, and reflects the vector sum of currents between depolarized and resting cells, thus providing both amplitude and directional information. Identification of intermittent events such as paroxysmal arrhythmias may require ambulatory ECG recording over 24 hours (Holter test), or an exercise tolerance test where workload is progressively increased to elicit events related to coronary artery disease for example. 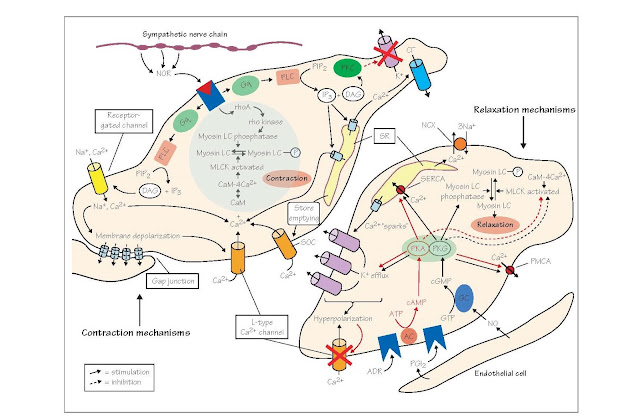 Recording the ECG
The ECG is based around the concept of an equilateral triangle (Einthoven’s triangle; Figure 14a). The points of the triangle are approximated by placing electrodes on the right arm (RA), left arm (LA) and left leg (LL). The right leg is commonly used as an earth to minimize interference. The voltage between any two electrodes will depend on the amplitude of the current, which is related to muscle mass, and the mean direction of current; it is thus a vector quantity (Figure 14b). The greatest voltage and thus deflection is therefore seen when the wave of depolarization is directly towards or away from the respective electrodes. By convention, the ECG is connected such that a wave of depolarization towards the positive electrode causes an upward deflection, and the paper speed of the recorder is normally 25 or 50 mm/s.
The various combinations of electrodes are called leads (not to be confused with the cables connecting the electrodes). The three bipolar limb leads each approximate the potential difference (PD) between two corners of Einthoven’s triangle, and are essentially looking at electrical activity in the heart from three different directions, separated by 60°. Lead I measures the PD between RA (positive electrode) and LA (negative electrode); lead II, RA (negative) and LL (positive); and lead III, LA (negative) and LL (positive).
The unipolar leads use a single sensing electrode, and measure the PD between this and an indifferent electrode representing the average potential of the whole body (i.e. zero). Practically, this is obtained by connecting RA, LA and LL together, which approximates the centre of Einthoven’s triangle (i.e. the heart). The six precordial (chest) leads use a separate sensing (positive) electrode placed on the chest so as to accentuate activity in particular regions of the heart (Figure 14c): V1 and V2, right ventricle; V3 and V4, interventricular septum; V5 and V6, left ventricle. However, the augmented limb leads use one limb connection as the sensing electrode (aVR, RA; aVL, LA; aVF, LL), with the remaining two connected together as the indifferent electrode. As they therefore measure from each corner of Einthoven’s triangle towards the centre, they ‘see’ the heart at angles rotated by 30° compared with the bipolar leads. The six limb leads therefore give a view of the electrical activity of the heart every 30° (hexaxial reference system; Figure 14d). Lead II and AVR normally shows the tallest QRS, as they lie closest to the mean direction of ventricular depolarization; as the ventricles have the greatest muscle mass, they generate the largest current. Together, the limb and precordial leads provide the standard 12 lead ECG (Figure 14e).
General features of the ECG (Figure 14b)
The P wave (≤0.12 s duration) is a small deflection due to depolarization of the atria (atrial systole). The QRS complex is normally <0.08 s in duration and reflects ventricular depolarization; it is largest because of the large ventricular mass. The relative size of the individual components varies between leads. In lead II the Q wave is a small downward deflection, reflecting left to right depolarization of the interventricular septum. The R wave is a strong upwards deflection, reflecting depolarization of the main ventricular mass. The S wave is a small downward deflection in lead II, and reflects depolarization of the last part of the ventricle close to the base of the heart. The T wave reflects ventricular repolarization, and is normally in the same direction as the R wave (e.g. upwards deflection in lead II). This is because although it is opposite in polarity, its direction is the opposite of that for depolarization (Figure 14b), as the length of action potential in the epicardium is shorter than that in the endocardium, so although the epicardium depolarizes last it repolarizes first. The reversal in direction therefore cancels out the reversal in polarity. Note that atrial repolarization is too small and diffuse to be seen, and the conducting system (see Chapter 13) has too small a mass to generate any significant voltage.
The PR interval represents the delay between atrial and ventricular depolarization, mostly in the atrioventricular node (AVN), and is measured from the start of P to the start of QRS. Normal duration is 0.12–0.20 s. The ST segment (∼0.25 s) is normally isoelectric (i.e. at zero potential), because all ventricular muscle is depolarized and so there can be no current flow between cells. The QT interval, from the start of QRS to the end of T, represents the duration of ventricular activation. It is strongly dependent on heart rate and is generally corrected by the Bazett formula (QTC = QT/square root of R–R interval). QTC is normally <0.44 s, slightly longer in females.

Basic interpretation of the ECG (Figure 14e) Rate and rhythm Heart rate in beats/min is 1/RR interval × 60. At a paper speed of 25 mm/s one large square = 0.2 s, one small square = 0.04 s. A heart rate above 100 beats/min is tachycardia, and below 60 beats/min bradycardia. A regular rhythm with a constant normal PR interval is sinus rhythm. A prolonged PR interval or disassociation of P and QRS waves suggests impaired conduction in the AVN or bundle of His (see Chapter 13).
QRS A broad and negative Q wave (sometimes normal in AVR and V1) or broad and misshapen QRS can be caused by a number of defects, including bundle branch block (see Chapter 13) or a ventricular origin of the heart beat (e.g. ectopic beats). A slowly developing Q wave may indicate a full wall-thickness myocardial infarction (MI; Figure 14f; see Chapter 45).
Cardiac axis The direction of maximum ECG amplitude (mean vector), and thus of the sum of currents generated by the ventricles. It is calculated from the relative size of the QRS for each limb lead, and ranges from +90° to −30° (Figure 14d). It depends on the orientation of the heart and so varies during breathing. Left axis deviation (−30° to −90°) may reflect left ventricular hypertrophy, and right axis deviation (+90° to +120°) right ventricular hypertrophy.
ST segment elevation Due to injury currents between damaged and undamaged cells, normally transient and indicative of recent MI (Figure 14f; see Chapter 45). Subendocardial MI may cause ST segment depression.
T wave inversion Often normal in lead III and V1, but in other leads may reflect MI and slowed conduction, such that repolarization of the epicardium occurs before repolarization of the endocardium. A tall peaked T wave can be caused by hyperkalaemia.
Prolonged QTC Reflects delayed repolarisation, and can be caused by class IA and III antiarrhythmic drugs, heart failure and g QT syndrome (see Chapters 46, 51 and 54).