Gas laws
To understand the processes involved in respiration and how valid measurements are made, it is important to understand the behaviour of gases in both gas mixtures and liquids.


Fractional concentration and partial pressure of gases in a gas mixture
Dalton’s law states that when two or more gases, which do not react chemically, are present in the same container, the total pressure is the sum of the partial pressures (the pressure that each gas would exert if isolated in the container). 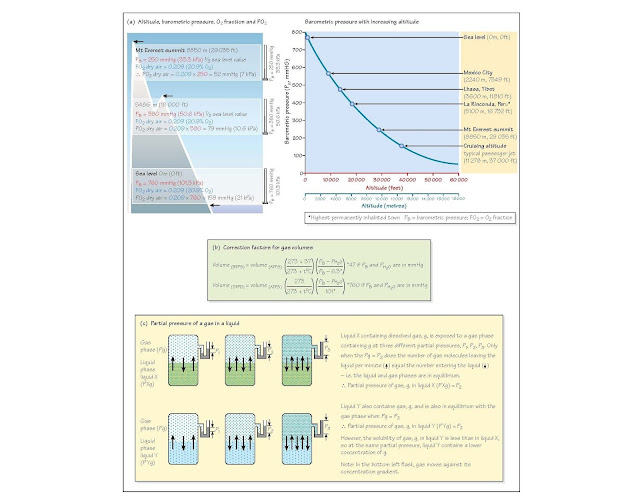 The partial pressure of moist inspired oxygen (P ( PB − saturated vapour pressure at 37◦C) IO2 ) = 0.21× Moistened inspired Pio2 is always 1.3 kPa (= 0.21 × 6.1) or 10 mmHg less than dry Po2. Note that this has a proportionally greater effect on Pio2 at high altitude than at sea level. If dry air is saturated with water at 37◦C, at sea level Pio2 falls by 6% from 21.2 to 19.9 kPa (159-149 mmHg); on the summit of Everest, Pio2 falls from 7.0 to 5.7 kPa (52-42 mmHg), a 19% reduction.
The effect of pressure and temperature on gas volumes
The inverse relationship between the volume of a perfect gas and its pressure, described by Boyle’s law (P ∝ 1/V), and the direct relationship between volume and absolute temperature ( 273 ◦C), described by Charles’ law (V T), are important when measuring gas volumes. Expired gas collected in a bag or spirometer will shrink, both because of the direct effect of falling temperature (Charles' law) and because water vapour condenses as temperature falls. To enable valid comparisons, volumes at ambient temperature and pressure saturated with water (ATPS) are corrected to those they would occupy under standard conditions. For measurements of lung volumes, this is to body temperature and pressure saturated with water (BTPS).
For 02 consumption or C02 production, standard temperature and pressure dry (STPD) (0◦C, 101.3 kPa (760 mmHg), Ph2o 0) are usually used, so that each litre contains the same number of molecules (1 mole 22.4 L). Boyle's law, Charles' law and the reduction of saturated vapour pressure with temperature are combined in the equations for correcting volumes given in Fig. 4b.