History Of Transplantation
Fundamentals
Vascular anastom ses
Transplantation of any organ demands the ability to join blood vessels together without clot formation. Early attempts inverted the edges of the vessels, as is done in bowel surgery, and thrombosis was common. It wasn’t until the work of Jaboulay and Carrel that eversion of the edges was shown to overcome the early thrombotic problems, work that earned Alexis Carrel the Nobel Prize in 1912. Carrel also described two other techniques that are employed today, namely triangulation to avoid narrowing an anastomosis and the use of a patch of neighbouring vessel wall as a flange to facilitate sewing, now known as a Carrel patch.

Source of organs
Having established how to perform the operation, the next step to advance transplantation was to find suitable organs. It was in the field of renal transplantation that progress was made, albeit slowly. In Vienna in 1902, Ulrich performed an experimental kidney trans- plant between dogs, and four years later in 1906, Jaboulay anastomosed animal kidneys to the brachial artery in the antecubital fossa of two patients with renal failure.
Clinical transplantation was attempted during the first half of the 20th century, but was restricted by an ignorance of the importance of minimising ischaemia – some of the early attempts used kidneys from cadavers several hours, and occasionally days, after death. It wasn’t until the mid-1950s that surgeons used ‘fresh’ organs, either from live patients who were having kidneys removed for transplantation or other reasons, or in Paris, from recently guillotined prisoners.

Where to place the kidney
Voronoy, a Russian surgeon in Kiev, is credited with the first human-to-human kidney transplant in 1936. He transplanted patients who had renal failure due to ingestion of mercuric chloride; the transplants never worked, in part because of the lengthy warm ischaemia of the kidneys (hours). Voronoy transplanted kidneys into the thigh, attracted by the easy exposure of the femoral vessels to which the renal vessels could be anastomosed. Hume, working in Boston in the early 1950s, also transplanted kidneys into the thigh, with the ureter opening on to the skin to allow ready observation of renal function. It was René Küss in Paris who, in 1951, placed the kidney intra-abdominally into the iliac fossa and established the technique used today for transplanting the kidney. 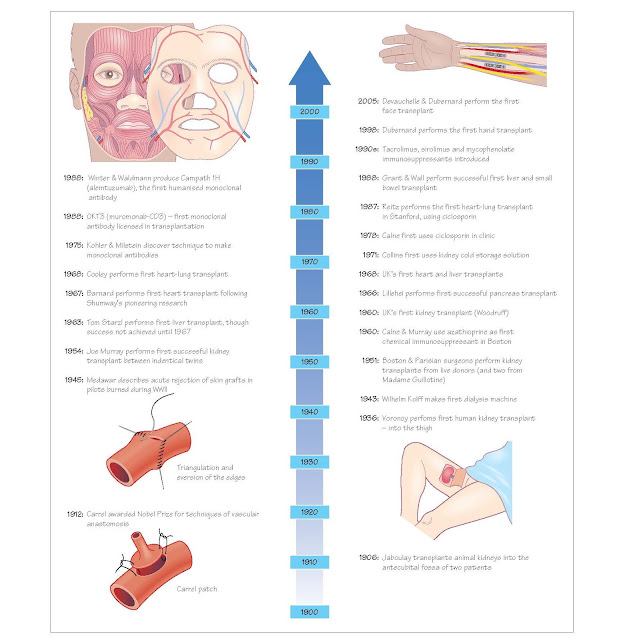 Early transplants
The 1950s was the decade that saw kidney transplantation become a reality. The alternative, dialysis, was still in its infancy so the reward for a successful transplant was enormous. Pioneers in the US and Europe, principally in Boston and Paris, vied to perform the first long-term successful transplant, but although initial function was now being achieved with ‘fresh’ kidneys, they rarely lasted more than a few weeks. Carrel in 1914 recognised that the immune system, the ‘reaction of an organism against the foreign tissue’, was the only hurdle left to be surmounted. The breakthrough in clinical transplantation came in December 1954, when a team in Boston led by Joseph Murray performed a transplant between identical twins, so bypassing the immune system completely and demonstrating that long-term survival was possible. The kidney recipient, Richard Herrick, survived 8 years following the transplant, dying from recurrent disease; his twin brother Ronald died in 2011, 56 years later. This success was followed by more identical- twin transplants, with Woodruff performing the first in the UK in Edinburgh in 1960.

Development of immunosuppression Demonstration that good outcomes following kidney transplantation were achievable led to exploration of ways to enable trans- plants between non-identical individuals. Early efforts focused on total body irradiation, but the side effects were severe and long- term results poor. The anticancer drug 6-mercaptopurine (6-MP) was shown by Calne to be immunosuppressive in dogs, but its toxicity led to the evaluation of its derivative, azathioprine. Azathioprine was used in clinical kidney transplantation in 1960 and, in combination with prednisolone, became the mainstay of immu- nosuppression until the 1980s, when ciclosporin was introduced. It was Roy Calne who was also responsible for the introduction of ciclosporin into clinical transplantation, the drug having originally been developed as an antifungal drug, but shelved by Sandoz, the pharmaceutical company involved, as ineffective. Jean Borel, working for Sandoz, had shown it to permit skin transplantation between mice, but Sandoz could foresee no use for such an agent. Calne confirmed the immunosuppressive properties of the drug in rodents, dogs and then humans. With ciclosporin, clinical trans- plantation was transformed. For the first time a powerful immunosuppressant with limited toxicity was available, and a drug that permitted successful non-renal transplantation.

Non-renal organ transplants
Transplantation of non-renal organs is an order of magnitude more difficult than transplantation of the kidney; for liver, heart or lungs the patient’s own organs must first be removed before the new organs are transplanted; in kidney transplantation the native kidneys are usually left in situ.
After much pioneering experimental work by Norman Shumway to establish the operative technique, it was Christiaan Barnard who performed the first heart transplant in 1967 in South Africa. The following year the first heart was transplanted in the UK by Donald Ross, also a South African; and 1968 also saw Denton Cooley perform the first heart-lung transplant.
The first human liver transplantation was performed by Tom Starzl in Denver in 1963, the culmination of much experimental work. Roy Calne performed the first liver transplant in the UK, something that was lost in the press at the time, since Ross’s heart transplant was carried out on the same day.
Although short-term survival (days) was shown to be possible, it was not until the advent of ciclosporin that clinical heart, lung and liver transplantation became a realistic therapeutic option. The immunosuppressive requirements of intestinal transplants are an order of magnitude greater, and their success had to await the advent of tacrolimus.
In addition, it should be remembered that at the time the pioneers were operating there were no brainstem criteria for the diagnosis of death, and the circulation had stopped some time before the organs were removed for transplantation.