Diagnosis Of Death And Its Physiology


Diagnosis Of Death And Its Physiology
Diagnosing death
Circulatory death
Traditionally, death has been certified by the absence of a circulation, usually taken as the point at which the heart stops beating. In the UK, current guidance suggests that death may be confirmed after 5 minutes of observation following cessation of cardiac function (e.g. absence of heart sounds, absence of palpable central pulse or asystole on a continuous electrocardiogram). Organ donation after circulatory death (DCD) may occur following confirmation that death has occurred (also called non-heart-beating donation). There are two sorts of DCD donation, controlled and uncontrolled.
Controlled DCD donation occurs when life-sustaining treatment is withdrawn on an intensive therapy unit (ITU). This usually involves discontinuing inotropes and other medicines, and stopping ventilation. This is done with the transplant team ready in the operating theatre able to proceed with organ retrieval as soon as death is confirmed.
Uncontrolled DCD donation occurs when a patient is brought into hospital and, in spite of attempts at resuscitation, dies. Since such events are unpredictable a surgical team is seldom present or prepared, and longer periods of warm ischaemia occur (see later).
Brainstem death
Brainstem death (often termed simply brain death) evolved not for the purposes of transplantation, but following technological advances in the 1960s and 1970s that enabled patients to be supported for long periods on a ventilator while deep in coma. There was a requirement to diagnose death in such patients whose cardiorespiratory function was supported artificially. Before brain-stem death can be diagnosed, five pre-requisites must be met. 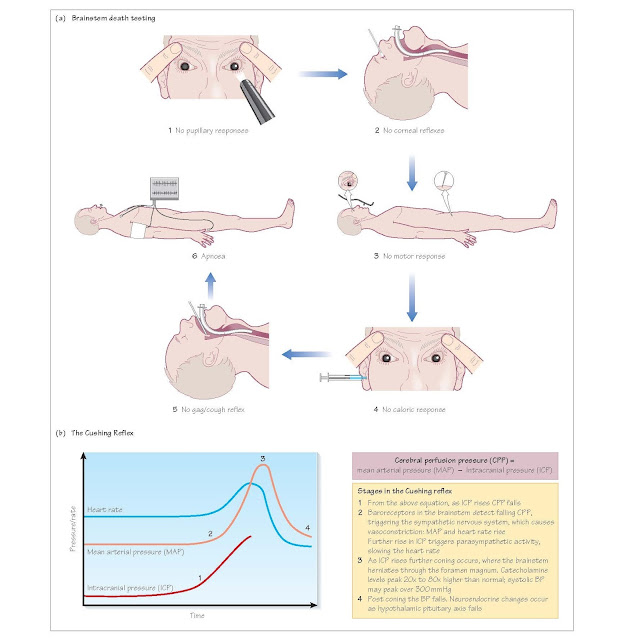 Pre-requisites before brainstem death testing can occur
1  The patient’s condition should be due to irreversible brain damage of known aetiology.
2  There should be no evidence that the comatose state is due to depressant drugs – drug levels should be measured if doubt exists.
3 Hypothermia as a cause of coma has been excluded – the temperature should be >34°C before testing.
4 Potentially reversible circulatory, metabolic and endocrine causes have been excluded. The commonest confounding problem is hypernatraemia, which develops as a consequence of diabetes insipidus, itself induced by failure of hypothalamic antidiuretic hormone (ADH) production.
5  Potentially reversible causes of apnoea have been excluded, such as neuromuscular blocking drugs or cervical cord injury.

Tests of brainstem function
1   Pupils are fixed and unresponsive to sharp changes in the intensity of incident light.
2  The corneal reflex is absent.
3  There is no motor response within the cranial nerve distribution to adequate stimulation of any somatic area, such as elicited by supra-orbital pressure.
4 The oculo-vestibular reflexes are absent: at least 50 ml of ice-cold water is injected into each external auditory meatus. In life, the gaze moves to the side of injection; in death, there is no movement.
5 There is no cough reflex to bronchial stimulation, e.g. to a suction catheter passed down the trachea to the carina, or gag response to stimulation of the posterior pharynx with a spatula.
6  The apnoea test: following pre-oxygenation with 100% oxygen, the respiratory rate is lowered until the pCO2 rises above 6.0 kPa (with a pH less than 7.4). The patient is then disconnected from the ventilator and observed for 5 minutes for a respiratory response. Following brainstem death spinal reflexes may still be intact, resulting in movements of the limbs and torso.
These criteria are used in the UK; different criteria exist else- where in the world, some countries requiring an unresponsive electroencephalogram (EEG) or demonstration of no flow in the cerebral arteries on angiography. The UK criteria assess brainstem function without which independent life is not possible.
Causes of death
Most organ donors have died from an intracranial catastrophe of some sort, be it haemorrhage, thrombosis, hypoxia, trauma or tumour. The past decade has seen a change in the types of brain injury suffered by deceased organ donors; deaths due to trauma are much less common, and have been replaced by an increased prevalence of deaths from stroke. This is also a reflection of the increased age of organ donors today.

Physiology of brainstem death
Cushing’s reflex and the catecholamine storm
Because the skull is a rigid container of fixed volume, the swelling that follows a brain injury results in increased intracranial pressure (ICP). The perfusion pressure of the brain is the mean arterial pressure (MAP) minus the ICP, hence as ICP rises, MAP must rise to maintain perfusion. This is triggered by baroreceptors in the brain-stem that activate the autonomic nervous system, resulting in catecholamine release. Catecholamine levels may reach 20-fold those of normal, with systemic blood pressure rising dramatically.
The ‘catecholamine storm’ has deleterious effects on other organs: the left ventricle is placed under significant strain with subendocardial haemorrhage, and subintimal haemorrhage occur in arteries, particularly at the points of bifurcation, predisposing to thrombosis of the organ following transplantation; perfusion of the abdominal organs suffers in response to the high catecholamine levels. Eventually the swollen brain forces the brainstem to herniate down through the foramen magnum (coning), an occurrence that is marked by its compression of the oculomotor nerve and resultant pupillary dilatation. Once coning has occurred circulatory collapse follows with hypotension, secondary myocardial depression and vasodilatation, with failure of hormonal and neural regulators of vascular tone.
Decompressive craniectomy
Modern neurosurgical practices include craniectomy (removal of parts of the skull) to allow the injured brain to swell, reducing ICP and so maintaining cerebral perfusion. While such practices may protect the brainstem, the catastrophic nature of the brain injury may be such that recovery will not occur and prolongation of treatment will be inappropriate. Such is the setting in which DCD donation often takes place.
Neuroendocrine changes associated with brain death Following brainstem death a number of neuroendocrine changes occur, most notably the cessation of ADH secretion, resulting in diabetes insipidus and consequent hypernatraemia. This is treated by the administration of exogenous ADH and 5% dextrose. Other components of the hypothalamic-pituitary axis may also merit treatment to optimise the organs, including the administration of glucocorticoids and triiodothyronine (T3).