Deceased Organ Donation
Opting in or opting out?
In the UK, as in most countries in the world, the next of kin are approached for consent/authorisation for organ donation, a system known colloquially as ‘opting in’. This system is facilitated by having a register, such as the UK organ donor register (ODR), where people can register their wishes to be a donor when they die; 29% of the UK population are on the register. However, opinion polls show that nearer to 90% of people are in favour of organ donation, suggesting that the shortfall is a consequence of apathy. When a person is on the ODR the relatives are much more likely (>90%) to consent to donation than where the wishes of the deceased were not known (∼60%).


In some parts of the world, most notably Spain, a system of presumed consent exists where you are presumed to have wanted to be an organ donor unless you registered your wish in life not to be so, i.e. you ‘opted out’. Spain also has the highest donation rate in the world, so on the face of it a switch to opting in should improve donation. However, there are other points to consider.
· Spain had presumed consent for 10 years before its donation rate rose – only after reorganising the transplant coordination infra- structure did donation rates rise, and it has been argued that it was this, not presumed consent, that was the key factor.
·    Even in Spain, the relatives are asked for permission and their wishes observed.
·    Other reasons that Spain has a higher donation rate than the UK include using organs from a wider age range, with many more donors over 60 and 70 being used than in the UK.
·    Some countries with presumed consent, such as Sweden, have donation rates below that of the UK.

Patterns of organ donation
The past decade has seen an increase in the number of deceased organ donors in the UK. That increase has been due to a 10-fold increase in DCD donors, who now comprise a third of all deceased donors in the UK. The number of donation after brain death (DBD) donors has fallen, although the proportion of potential DBD donors for whom consent for donation is obtained has increased. 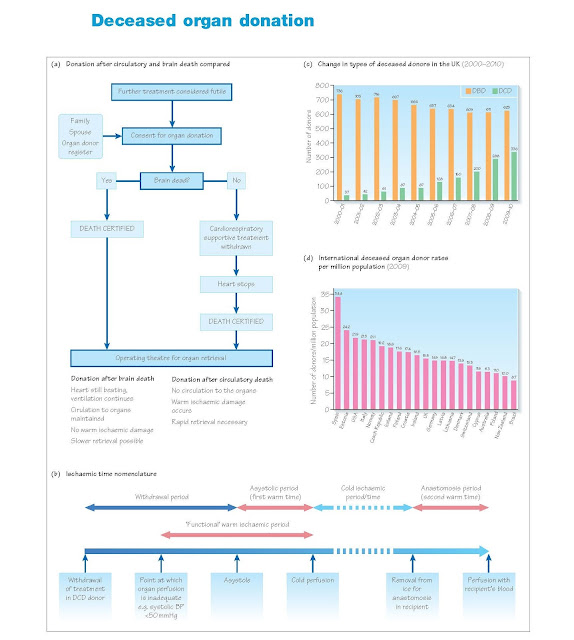 Organ retrieval
DBD donation
Since DBD donors are certified dead while on cardiorespiratory support, the organs continue to be perfused with oxygenated blood while the retrieval surgery takes place. Once the dissection phase is completed, ice-cold preservation solution is passed through a cannula into the aorta with exsanguination via the vena cava; at the same time ice-cold cardioplegia is perfused into the coronary arteries to arrest the heart. The organs are flushed and cooled in situ, removed and then placed into more preservation solution and packaged for transit in crushed ice.

DCD donation
In contrast to DBD donation, the circulation has, by definition, already ceased in DCD donors before organ retrieval commences. In controlled DCD donation, the surgical team is ready and waiting in the theatre, while treatment is withdrawn either in the ITU or in the theatre complex. Death may then be instantaneous, but more commonly follows a variable period of time while the blood pressure falls before cardiac arrest occurs. When the blood pressure is insufficient to perfuse the vital organs, functional warm ischaemia commences. In the UK no treatment can be given to the donor prior to death; in the US it is permissible to give heparin to prevent in situ thrombosis. When the retrieval surgery begins the organs are still warm and already ischaemic. Unlike DBD donation, where the organs are mobilised while a circulation is still present, for DCD donation the abdominal organs are perfused with cold preservation solution as soon as the abdomen is opened, to convert warm ischaemia to cold ischaemia; once cooled the organs are rapidly mobilised and removed.

Ischaemic times
The nomenclature used for the time periods from donation to transplantation is shown in Figure 3c. Warm ischaemia is most deleterious to an organ, and it is often said that a minute of warm ischaemia does the same damage as an hour of cold ischaemia. Since the duration of ischaemia is one of the few things that a surgeon can modify to improve the outcome following transplantation, every effort is made to minimise both warm and cold ischaemia and to transplant the organs as soon as possible.

Contraindications to donation
It has long been established that malignancy and infection can be transferred with a donor organ to the recipient. However, there are occasions, such as when a potential recipient will die if not transplanted immediately, where the balance of risks may favour using at-risk organs. Nevertheless the following are generally considered contraindications to donation:
·       Active cancer, except skin cancer (not melanoma) and some primary brain tumours; this includes recently treated cancers;
·       Untreated systemic infection;
·       Hepatitis b or c or hiv, except to similarly infected recipients;
·       Other rare viral infections, e.g. Rabies.
At the time of retrieval the donor surgeon must do a thorough laparotomy and thoracotomy looking for evidence of occult malignancy, such as a lung, stomach, oesophageal or pancreatic tumour. In addition, it goes without saying that evidence of severe, permanent damage to the organ to be transplanted is a contraindication to its use, e.g. a heart with coronary artery disease or a cirrhotic liver.

Suboptimal organs
Less than ideal organs, sometimes called expanded criteria or marginal organs, are those whose anticipated function is likely to be less than ideal, but nevertheless adequate. Every recipient would like a new organ, but the reality is that all organs are ‘second hand’, and someone dying below the age of 60 usually has significant other comorbidity that contributed to their early death, such as cigarette smoking-associated pathologies or hyper- tension. Deaths from trauma are increasingly uncommon. The severe shortage of organs, particularly from young donors, means that compromises have to be made to balance the risks of dying on the waiting list: 25% of patients awaiting a lung transplant will die in the first year of waiting, as will 15% of those awaiting a liver.