Live Donor Kidney Transplantation
The limited supply of deceased donor organs and an ever-increasing number of patients waiting for kidney transplantation has led to the widespread use of living donors. Renal transplantation has the unique advantage, compared with other organs, that most individuals have two kidneys, and if not diseased, have sufficient reserve of renal function to survive unimpeded with a single kidney. The shortage of donors has also led to the use of parts of non-paired organs, such as liver and lung lobes, the tail of pancreas and lengths of intestine from living donors; indeed, even live donation of the heart has occurred, when the donor has lung disease and received a combined heart-lung transplant, with their own heart being transplanted to someone else, so called ‘domino transplantation’. For the purposes of this chapter we will focus on live kidney donation, but similar principles apply to other organs.


Advantages of living donor transplantation
1 Living donation is an elective operation that takes place during standard working hours, when there is a full complement of staff and back-up facilities immediately available, minimising perioperative complications. This is in contrast to deceased donor trans- plants, which often occur at night as an emergency procedure.
2 The donor kidney function and anatomy can be fully assessed prior to transplantation. This ensures that the kidney, once transplanted, will provide the recipient with an adequate glomerular filtration rate (GFR) post-transplant.
3 The donor nephrectomy and recipient transplant operation can take place in adjacent theatres to minimise the cold ischaemic time.
4 Unlike deceased donor organs, there has been no agonal phase, no catecholamine storm and no other perimortem injury to affect the function of the kidney.
5 Allograft survival. Unsurprisingly, given the considerations listed in 1–4, allograft survival is better in living donor kidneys compared with deceased donor kidneys. For example, in the UK, the 5-year survival of a living donor kidney is around 89% com- pared with 82% for a deceased donor kidney (1999–2003 cohort).

Living kidney donation Assessing a living kidney donor Medical f﻿itness of donor
Donating a kidney involves a significant operation, lasting 1 to 3 hours. A detailed history and careful examination should be per- formed. If the donor has any pre-existing medical condition that would place them at high risk of complications during an anaesthetic, e.g. previous myocardial infarction (MI) or poor left ventricular (LV) function, then they would not be suitable for donation. A full examination is performed, including assessment of the donor’s body mass index (BMI). Typical donor investigations would include a full blood count, clotting screen, renal function tests, liver function tests, an ECG and a chest radiograph; a more detailed cardiological work-up including echocardiogram and cardiac stress testing are performed if indicated. Tests to exclude chronic viral infections such as hepatitis B and C, and HIV are also performed.

Psychosocial f﻿itness
As well as physical considerations, the transplant clinicians must also be sure that the donor is mentally and emotionally sound and understands the implications of the procedure. They must be certain that there is no coercion involved. Donors are also assessed by an independent third party. 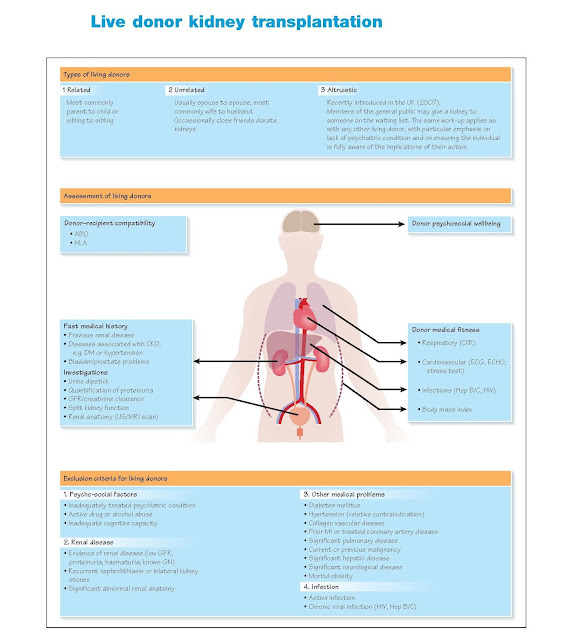 Adequacy of donor renal function
Donation will involve the donor losing one kidney. Thus it is important to ensure that the donor has sufficient renal reserve to allow this to occur and leave adequate renal function for a healthy existence.

History: Pre-existing medical conditions, such as diabetes mellitus or hypertension, which can lead to chronic kidney disease are a relative contraindication to donation. A family history of renal disease should also be sought, e.g. polycystic kidney disease, Alport’s syndrome or a familial glomerulonephritis.

Examination: Hypertension may be previously undiagnosed and should therefore be carefully assessed on more than one occasion.

Investigations: Initially, an ultrasound scan of the renal tract is performed to ensure that the donor has two kidneys of normal size. The urine is tested to ensure no microscopic haematuria or proteinuria, which may indicate underlying renal disease. Quantification of urinary protein with a spot urine protein–creatinine ratio, an albumin–creatinine ratio or a 24-hour urine collection for protein is also required. Renal function is estimated by serum creatinine, creatinine clearance and measured GFR, together with the split function. If the renal function is sufficient to allow halving of the GFR and some decline in renal function with age, then the donor is considered suitable. Renal anatomy is defined by magnetic resonance (MR) or computed tomography (CT) scan to allow choice of the most suitable kidney to remove – preference is for the kidney with single artery and vein; if otherwise equal, the left kidney is removed since it has a longer vein to facilitate implantation.

Donor nephrectomy technique
Donor nephrectomy was traditionally an open procedure, but is now done laparoscopically in most centres. An open nephrectomy is performed either through modified flank incision or a subcostal incision. Careful dissection is required to preserve the main vessels and ureteric blood supply. The advantage of an open approach is that it minimises potential abdominal complications intra-operatively. However, it leaves a significant surgical scar (which can develop herniation in the longer term) and requires a longer period of recovery (6–8 weeks). In contrast, a laparoscopic approach is technically more demanding, may take longer to perform, but leaves a smaller surgical scar. The average inpatient stay is just 2–4 days, and recovery time much shorter.