Live Donor Liver Transplantation
Live liver donation
Much of what has been said about the assessment of a kidney donor applies to a liver donor, with the exception that the full assessment of the liver, its function, exclusion of disease and assessment of its anatomy are paramount.


The clinical imperative to donate
Unlike kidney transplantation, where the alternative of dialysis will keep a potential recipient alive, there is no fall back to liver transplantation. If a patient is deemed to require a liver transplant then they have a 10–20% chance of dying while waiting for a deceased donor; if they require an urgent liver transplant the chance of death is higher. It is against this background that potential donors are approached, in the knowledge that the clinical situation is often coercive by its very nature. There is not the luxury of time to assess the potential donor, unlike with live kidney donation.
In addition, a further imperative may be added. For some conditions, such as large primary liver tumours, liver transplantation is not considered to be a sensible use of deceased donor organs because the chance of 5-year survival is less than 50%. It has been proposed that live donors should be allowed to donate in such circumstances, although there is an ethical distinction between putting your life at risk to donate a liver lobe in the expectation of a good outcome compared with an expectation that life may only be prolonged for a year or so. 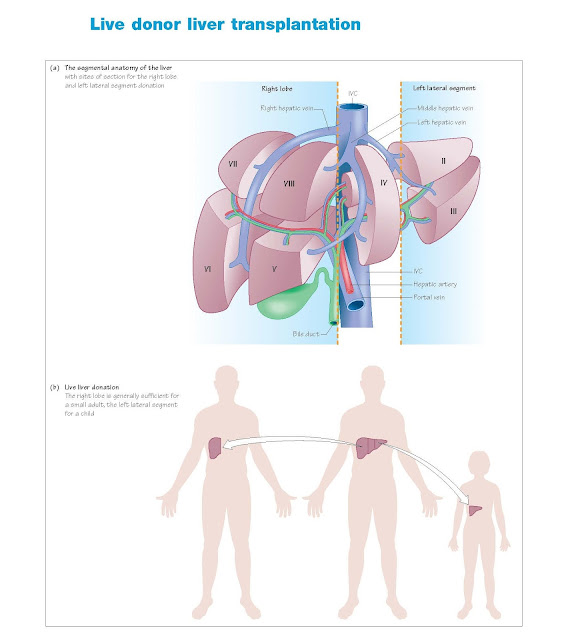 Live donor liver surgery
Principles
Following resection of a part of the liver, the remaining liver will grow relatively quickly to fill the space previously occupied by the resected portion. The process of dividing the liver into two is difficult, since there are no clear anatomical planes to follow. The blood supply and bile ducts come into the hilum and divide, giving branches to each of the eight segments; the blood drains through the hepatic veins, which, in part, run at right-angles to the inflow vessels.
Two separate resections may be performed.
Left lateral segment
The left lateral segment of the liver (segments 2 and 3) can be removed relatively easily, leaving a single portal vein, hepatic artery, hepatic vein and bile duct on the donated liver. The volume of the left lobe makes it suitable only for use in a child.
Full right lobe
The right lobe of the liver comprises segments 5 to 8. It is marked on the surface of the liver by a line from the gall bladder fundus to the suprahepatic inferior vena cava (IVC), a line of division that runs almost on top of the middle hepatic vein. By dividing the liver along this plane the arterial inflow and biliary drainage are separated. However, the middle hepatic vein, which drains segment 4 as well as segments 5 and 8, needs to be taken either with the donated liver or left in the recipient, with venous drainage from the other half being reconstructed using donor saphenous vein to prevent infarction of the segment.
In both cases the liver is removed from the IVC, leaving that with the donor and necessitating that the recipient undergoes a hepatectomy with caval conservation.

Recipient suitability
Not all recipients will be suitable for a live donor transplant, either because they are too big, or for anatomical or pathological reasons.

Live liver donor assessment
Assessment of the potential donor
Liver resection is a much bigger procedure than nephrectomy and demands a greater level of fitness. Careful history taking and clinical examination are paramount, particularly with respect to exercise tolerance.
1   Cardiac screening: echo, stress test (echo or nuclear medicine).
2   Respiratory: chest radiograph; pulmonary function tests if concern exists.
3   Psychiatric: careful assessment, particularly because of the issues mentioned earlier with respect to coercion, albeit through a sense of obligation.

Assessment of liver function
Standard screening tests for underlying liver disease are performed on the potential donor, similar to those that form the assessment of any patient presenting with newly diagnosed liver disease. An ultrasound of liver and spleen is performed to screen for patency of the vessels and evidence of portal hypertension. Any intrahepatic lesion is appropriately characterised. Biopsy may be required to fully evaluate the liver.
The most important aspect of live donation is to estimate the volume of the liver that can be safely donated, and whether this would suffice in the recipient, leaving sufficient in the donor. In general, leaving less than 30% of viable donor liver behind is unsafe, and more is required if part of the residual liver will be rendered ischaemic by the procedure, such as when the middle hepatic vein drainage of segment 4 is lost. The recipient requires a graft estimated to be >0.8% of their body weight.

Risks of donation
Living kidney donation is an elective procedure, and the operation is associated with a low mortality rate (around 0.03%). The reoperation rate is less than 1%, and serious post-operative complications such as pulmonary embolism are uncommon (less than 3%). The long-term outcome for living donors appears to be satisfactory.
Donation of a liver lobe is more dangerous. Donation of the left lateral segment for a child has a relatively low mortality rate (0.2%) in contrast to donation of the right lobe for an adult, where the risk of death is 0.5–1%. Death is commonly related to surgical complications (bleeding), post-operative complications (pulmonary embolism) or lack of sufficient residual liver – in the latter case donors have occasionally required emergency transplantation themselves. Morbidity is around 35%, with bleeding and bile leaks (from the cut surface) common.