Innate Immunity
The role of the immune system is to identify and remove invading microorganisms before they cause harm to the host. This is achieved by a rapid, non-specific innate immune response that is followed by a more finely tuned, targeted, adaptive immune response. The innate immune system is comprised of components that directly recognise and destroy pathogens (the complement system), a number of ‘flags’ known as opsonins (e.g. C-reactive protein [CRP], C3b, natural IgM antibody), which make pathogens more easily recognised by immune cells such as phagocytes (neutrophils and macrophages), which engulf and kill internalised pathogens, and natural killer (NK) cells, which can detect and destroy virus-infected cells. 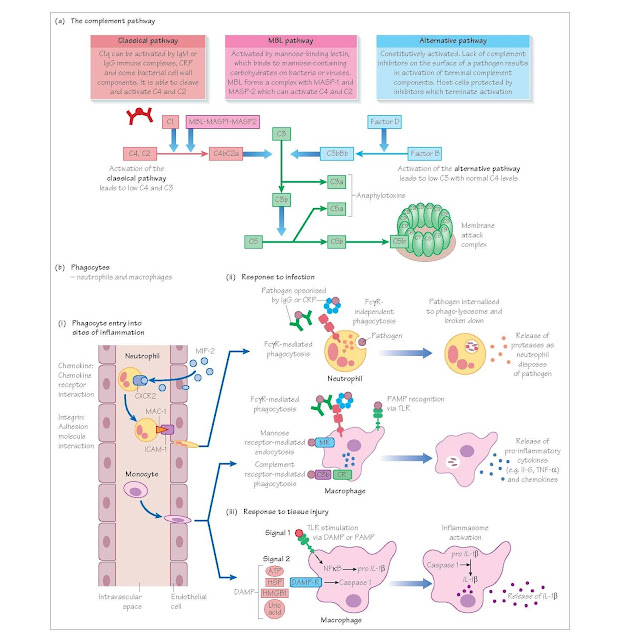 The complement system
The complement system is a series of proteases, which are sequentially activated and culminate in the formation of the membrane attack complex (MAC). The MAC forms a hole in the membrane of the cell into which it is inserted (pathogen or host), disrupting membrane integrity and causing cell lysis. The complement system can be activated in three ways:
1   the classical pathway
2   the alternative pathway
3   the mannose binding pathway.
IgM or immune complexed IgG activate the classical pathway. The alternative pathway is constitutively active, while the mannose binding pathway is activated by carbohydrates present on pathogens. The net result of activating any of the three pathways is the formation of a C3 convertase (either C4bC2a or C3bBb), which cleaves C3. The resulting C3b cleaves C5 and activates a final common pathway resulting in MAC formation. Complement activation also leads to the production of anaphylotoxins (C3a and C5a), which activate neutrophils and mast cells, promoting inflammation. In addition, C3b can opsonise pathogens for uptake by complement receptors CR1 and CR3 on phagocytes.

Pentraxins
These are a family of proteins with a pentameric structure that include CRP and serum amyloid protein (SAP). CRP and SAP are synthesised in the liver and rapidly released into the bloodstream in response to inflammation and are therefore called acute phase proteins. Pentraxins bind to phosphorylcholine found on the surface of pathogens and can fix complement (via the classical pathway) and opsonise pathogens for uptake by phagocytes through binding to surface Fc-gamma receptors (FcγRs). Pentraxins can also bind to apoptotic cells, facilitating their disposal.

Phagocytes
Phagocytes (from the Greek word ‘phagein’ – ‘to eat’) are cells that ingest debris, pathogens and dying cells. There are two main types of phagocyte, neutrophils (which circulate in the blood until they are called into tissues), and macrophages, which are resident in tissues and act as immune sentinels. The circulating monocyte is the precursor to tissue macrophages. Neutrophils are the most abundant circulating leucocyte and can be identified by their multi-lobed nucleus and the presence of numerous granules within their cytoplasm, which contain proteases (for example myeloperoxidase) and other bacteriocidal substances. Neutrophils move into tissues by virtue of surface molecules called integrins (for example MAC-1), which bind to adhesion molecules that are upregulated on vascular endothelium in inflamed tissue (for example ICAM-1).
Phagocytes detect pathogens via membrane receptors, which recognise repeating surface motifs on microbes, so-called pathogen-associated molecular patterns (PAMPs). These innate receptors include the toll-like receptors (TLRs) and the mannose receptors. Phagocytes can also internalise opsonised pathogens via complement receptors and FcγRs. Once internalised, the microbe will be destroyed within the phagolysosome by proteases and by the generation of oxygen and nitrogen free radicals. Tissue- resident macrophages secrete pro-inflammatory cytokines such as tumour necrosis factor (TNF)-α and interleukin (IL)-6, which lead to changes in vascular permeability, and in the molecules expressed on vascular endothelial cells. They also produce chemicals that attract neutrophils and monocytes (known as chemokines). These changes facilitate the entry of neutrophils and monocytes from the circulation into the site of infection and result in the cardinal signs of inflammation (calor, dolor, rubor and tumor, i.e. heat, pain, redness and swelling).
Macrophages can also be activated by danger/damage- associated molecular patterns (DAMPs), for example heat shock proteins (HSPs) or ATP, which are release by damaged or dying host cells. This leads to activation of the inflammasome and the production of IL1-β and IL18. In addition, macrophages have the capacity to process and present antigen (see Chapter 8).

Mast cells
Mast cells are large tissue-resident cells found mainly in the skin and at mucosal surfaces. They are packed with granules containing vasoactive amines (e.g. histamine) and heparin. Mast cell degranulation may be induced by trauma or UV light, and by binding of IgE antibodies to Fc-epsilon receptors found on the surface of mast cells. Mast cells play an important role in allergy and anaphylaxis.

Natural killer cells
Natural killer cells express surface receptors (killer-cell immunoglobulin-like receptors [KIRs]), which bind to and assess cell surface major histocompatibility complex (MHC) class I molecules. If non-self or altered self-antigen is detected on class I molecules, e.g. in virally infected cells or tumour cells, then the NK cell will destroy this cell by the release of perforin (punches holes in cells), granzyme (poisons cells) or the induction of apoptosis. In addition, NK cells express FcγRs and can therefore be activated against antibody-opsonised cells. This is known as antibody-dependent cellular cytotoxicity (ADCC).