Autonomic Control Of The Cardiovascular System


Autonomic Control Of The Cardiovascular System
The autonomic nervous system (ANS) comprises a system of efferent nerves that regulate the involuntary functioning of most organs, including the heart and vasculature. The cardiovascular effects of the ANS are deployed for two purposes.


First, the ANS provides the effector arm of the cardiovascular reflexes, which respond mainly to activation of receptors in the cardiovascular system (see Chapter 27). They are designed to maintain an appropriate blood pressure, and have a crucial role in homeostatic adjustments to postural changes (see Chapter 22), haemorrhage (see Chapter 31) and changes in blood gases. The autonomic circulation is able to override local vascular control mechanisms in order to serve the needs of the body as a whole.
Second, ANS function is also regulated by signals initiated within the brain as it reacts to environmental stimuli or emotional stress. The brain can selectively modify or override the cardiovascular reflexes, producing specific patterns of cardiovascular adjustments, which are sometimes coupled with behavioural responses. Complex responses of this type are involved in exercise (see Chapter 30), thermoregulation (see Chapter 25), the ‘fight or flight’ (defence) response and ‘playing dead’.
The ANS is divided into sympathetic and parasympathetic branches. The nervous pathways of both branches of the ANS consist of two sets of neurones arranged in series. Preganglionic neurones originate in the central nervous system and terminate in peripheral ganglia, where they synapse with postganglionic neurones innervating the target organs. 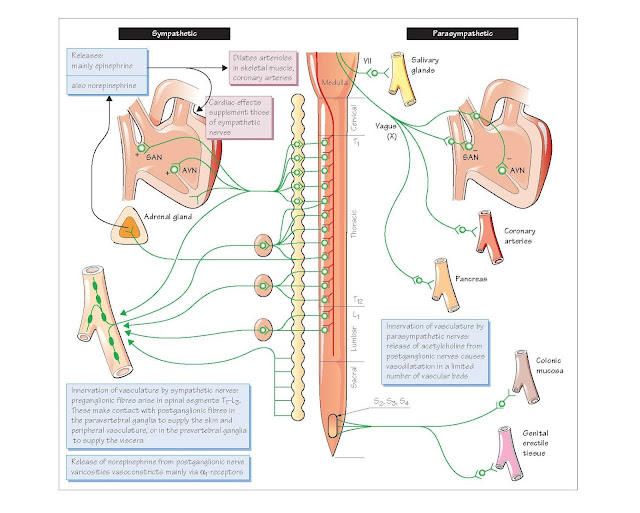 Effects On The Heart
Catecholamines acting via cardiac β1-receptors have positive inotropic and chronotropic effects via mechanisms described in Chapters 12 and 13. At rest, cardiac sympathetic nerves exert a tonic accelerating influence on the sinoatrial node, which is, however, overshadowed in younger people by the opposite and dominant effect of parasympathetic vagal tone. Vagal tone decreases progressively with age, causing a rise in the resting heart rate as the sympathetic influence becomes more dominant.

Effects on the vasculature
At rest, vascular sympathetic nerves fire impulses at a rate of 1–2 impulses/s, thereby tonically vasoconstricting the arteries, arterioles and veins. Increasing activation of the sympathetic system causes further vasoconstriction. Vasoconstriction is mediated mainly by α1-receptors on the vascular smooth muscle cells. The arterial system, particularly the arterioles, is more densely inner- vated by the sympathetic system than is the venous system. Sympathetic vasoconstriction is particularly marked in the splanchnic, renal, cutaneous and skeletal muscle vascular beds.
The vasculature also contains both β1- and β2-receptors, which when stimulated exert a vasodilating influence, especially in the skeletal and coronary circulations. These may have a limited role in dilating these vascular beds in response to adrenaline release, for example during mental stress. In some species, sympathetic cholinergic fibres innervate skeletal muscle blood vessels and cause vasodilatation during the defence reaction. A similar but minor role for such nerves in humans has been proposed, but is unproven. It is a common fallacy that the sympathetic nerves are always activated en masse. In reality, changes in sympathetic vasoconstrictor activity can be limited to certain regions (e.g. to the skin during thermoregulation). Similarly, a sympathetically mediated tachycardia occurs with no change in inotropy or vascular resistance during the Bainbridge reflex (see Chapter 27).

The Parasympathetic System
The parasympathetic preganglionic neurones involved in regulating the heart have their cell bodies in the nucleus ambiguus and the dorsal motor nucleus of the medulla. Their axons run in the vagus nerve (cranial nerve X) and release acetylcholine onto nicotinic receptors on short postganglionic neurones originating in the cardiac plexus. These innervate the sinoatrial node (SAN), the atrioventricular node (AVN) and the atria.

Effects On The Heart
Basal acetylcholine release by vagal nerve terminals acts on muscarinic receptors to slow the discharge of the SAN. Increased vagal tone further decreases the heart rate and the speed of impulse conduction through the AVN and also decreases the force of atrial contraction when activated.

Effects On The Vasculature
Although vagal slowing of the heart can decrease the blood pressure by lowering cardiac output, the parasympathetic system has no effect on total peripheral resistance, because it innervates only a limited number of vascular beds. In particular, activation of parasympathetic fibres in the pelvic nerve causes erection by vasodilating arterioles in the erectile tissue of the genitalia. Para-sympathetic nerves also cause vasodilatation in the pancreas and salivary glands.