In a human new born at birth, in the female as well as in the male, the mammary glands have developed sufﬁciently so that they appear as distinct hemispheroidal elevations, palpable as movable soft masses. This is especially prominent in postterm infants. Histologically, a number of branching channels with layers of lining cells and plugs of basal cells at their ends, the future milk ducts and glandular lobules, respectively, can easily be recognized. In a great number of infants an everted nipple is observed, and in about 10% a greatly enlarged gland can be palpated, a condition that received the unfortunate name of mastitis neonatorum, though no signs of inﬂammation exist. These early glandular structures may produce a milk like secretion, the “witch’s milk,” starting 2 or 3 days after birth. All these neonatal phenomena in the breast are the result of the very intensive, maternal estrogen driven developmental processes in the last stages of intrauterine life. The changes subside within the ﬁrst 2 to 3 weeks of life. It is during this period that the breast undergoes marked involutional changes leading to the quiescent stage, which is characteristic of infancy and childhood. During these periods, the male and the female glands consist of a few branching rudimentary ducts lined by ﬂattened epithelium, surrounded by collagenous connective tissue. 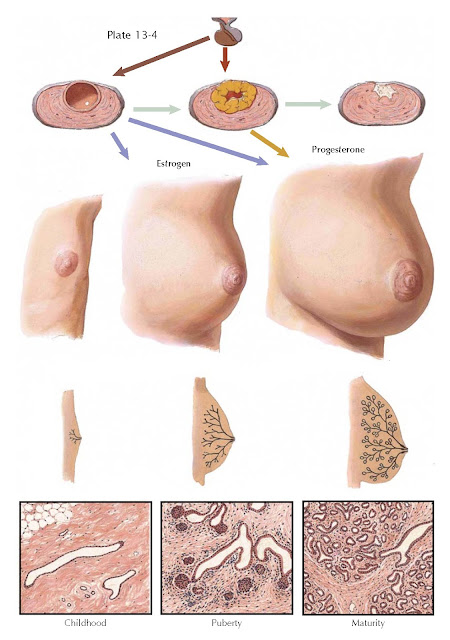 For most girls, the ﬁrst sign of puberty is usually the appearance of breast budding. In the United States, this early breast change begins at an average age of 10.8 (±1.1) years of age. With the onset of puberty and during adolescence, follicular ripening in the ovaries, in response to follicular-stimulating hormone (FSH) of the anterior pituitary gland, is accompanied by an increased output of estrogen. In response to the latter, the mammary ducts elongate and their lining epithelium reduplicates and proliferates at the ends of the mammary tubules, forming the sprouts of the future lobules. This growth of ductal epithelium is accompanied by growth of periductal ﬁbrous tissue, which is largely responsible for the increasing size and ﬁrmness of the adolescent female gland. During this period, the areola and nipple also grow and become pigmented.

With the onset of maturity, that is, when ovulation occurs and the progesterone-secreting corpora lutea are formed, the second stage of mammary development occurs. It is essentially concerned with the formation of the lobules and acinar structures. Although in the adult woman, progesterone always asserts its inﬂuence when estrogen is simultaneously present, overwhelming experimental evidence indicates that this beginning unfolding of the lobules is a speciﬁc effect of progesterone. This gives the mammary gland the characteristic lobular structure found during the childbearing years. This differentiation into a lobular gland is ﬁnished approximately 1 to 1½ years after the ﬁrst menstruation, but further acinar development continues in proportion to the intensity of the hormonal stimuli during each menstrual cycle and especially during pregnancies. Fat deposition and formation of ﬁbrous stroma contribute to the increasing size of the gland in the adolescent period.

The predictable sequence of breast development brought on during adolescence forms one part of the sexual maturation scale (Tanner staging) that is used to assess the degree and sequence of pubertal development. In 1969, Marshall and Tanner deﬁned ﬁve stages of breast development and pubic hair development that are combined and called Tanner, or pubertal, stages 1 through 5. For most girls, breast budding is the earliest sign of puberty and menarche the latest.