The lymphatic distribution of the breast is complex. The mammary gland has a very rich network of lymph vessels, which is separated into two planes, the superﬁcial or subareolar plexus of lymphatics and the deep or fascial plexus. Both originate in the interlobular spaces and in the walls of the lactiferous ducts. The lymph nodes that drain the breast are not linked in a straight line; instead, they are staggered, variable, and ﬁxed within fat pads. This arrangement complicates lymph node removal during breast cancer surgery.

Collecting lymph from the central parts of the gland, the skin, areola, and nipple, most of the superﬁcial plexus drains laterally toward the axilla, passing ﬁrst to the anterior pectoral group of nodes, which are often referred to as the low axillary group of glands. The anterior pectoral nodes, four to six in number, lie along the border of the pectoral muscles adjacent to the lateral thoracic artery. The drainage passes thence to the central axillary nodes, which lie along the axillary vein, or to the midaxillary nodes. From there, the drainage is to the subclavian nodes at the apex of the axilla where the axillary and subclavian veins join. The axilla contains a varying number of nodes, usually between 30 and 60. Approximately 75% of the breast lymphatic drainage goes to these axillary regional nodes. 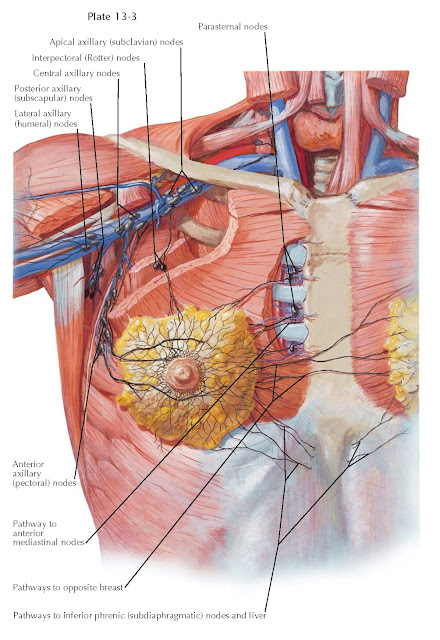 The deep fascial plexus extends through the pectoral muscles to Rotter lymph nodes, situated beneath the pectoralis major muscle, and thence to the subclavian nodes. This is known as Groszman pathway. The rest of the fascial plexus, for the most part, extends medially along the internal mammary artery via the internal mammary nodes to the mediastinal nodes. Other paths of lymphatic drainage proceed from the lower and medial portions of the breast. One of these is the paramammary route of Gerota, through the abdominal lymphatics to the liver or subdiaphragmatic nodes. Another is a cross-mammary pathway, via superﬁcial lymphatics to the opposite breast and opposite axilla. Metastases from one breast across the midline to the other breast or chest wall occur occasionally via this pathway. From the lower medial portion of the breast, some lymphatics of the fascial group drain, passing beneath the sternum, to the anterior mediastinal nodes situated in front of the aorta. Lymphatic drainage to the intercostal glands, which are located posteriorly along the vertebral column, and to subpectoral and subdiaphragmatic areas may also occur.

Lymph nodes play a central role in the spread of breast cancer. The axillary lymph nodes are particularly important, as they are among the ﬁrst places that cancer is likely to metastasize from the breast. This cluster of lymph nodes is often referred to as level I nodes. (Level II nodes are located underneath the pectoralis minor muscle, and level III nodes are found near the center of the collarbone.) Other metastatic routes include lymphatics adjacent to the internal mammary vessels, allowing direct spread into the mediastinum.

Lymph drainage usually moves toward the most adjacent group of nodes: this is the basis for the concept of sentinel node mapping in breast cancer. In most instances, breast cancer spreads in a predictable way within the axillary lymph node chain based on the location of the primary tumor and the associated sentinel nodes. However, lymphatic metastases from one speciﬁc area of the breast may be found in any or all of the groups of regional nodes. Despite this observation, the concept of using a sentinel node to detect spread is still useful because in only about 3% of these women does the positive node occur outside of the axilla.