The sources of the abundant vascular supply of the mammary gland are the descending thoracic aorta, from which the posterior intercostal arteries branch off; the subclavian artery, from which the internal mammary artery arises; and the axillary artery, serving the mammary gland through the lateral thoracic and sometimes through another branch, the external mammary artery. Additional blood may be supplied by branches from the thoracodorsal artery and the thoracoacromial artery, which is a short trunk that arises from the forepart of the axillary artery, its origin being generally overlapped by the upper edge of the pectoralis minor. The intercostal branches of the internal mammary artery, the thoracic portion of which lies behind the cartilage of the six upper ribs just outside the parietal layer of the pleura, supply the medial aspect of the gland. The lateral cutaneous branches of the third, fourth, and ﬁfth aortic intercostal arteries enter the gland laterally. The lateral cutaneous branches of the intercostal arteries penetrate the muscles of the side of the chest and then divide into anterior and posterior rami, of which only the anterior rami reach the mammary gland. The branches from the lateral thoracic artery, which descends along the lower border of the minor pectoral muscle, approach the gland from behind in the region of the upper outer quadrant. One of these branches (in women more developed than the other branches) is the external mammary artery, which turns around the edge of the pectoralis major muscle, where it could be seen in the picture if the breast were lifted up. An extensive network of anastomoses exists between the lateral thoracic artery and those vessels deriving from the internal mammary artery; the latter also anastomoses with the intercostal arteries, so that two or even three of the main sources supply many parts of the gland. The ramiﬁcations of all three main arteries form a circular plexus around the areola, which ensures the blood supply of the nipple and areola. The breast skin depends on the subdermal plexus for its blood supply. This plexus is in communication with underlying deeper vessels supplying the breast parenchyma, where a second plexus from the same main vessels is formed in the deeper regions of the gland. 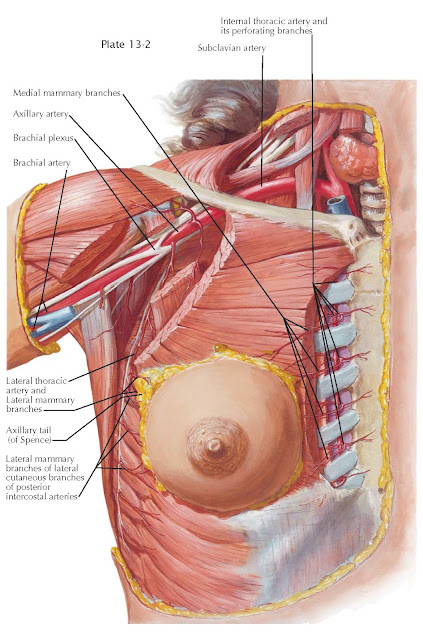 A number of variations of this vascular distribution exist and should be considered to avoid the danger of necrosis, for example, in circular incisions around the nipple. The rich blood supply of the breast allows for a variety of surgical procedures, therapeutic or cosmetic, to be performed while ensuring the viability of the skin ﬂaps and breast parenchyma after surgery. This advantage can become a disadvantage by providing a point of systemic spread for infection or malignancy.

The veins follow the course of the arteries. Venous drainage is primarily into the axillary vein, with some blood draining into the internal thoracic vein. The axillary vein has an irregular anatomy, which complicates surgery under the arm. The surface veins encircle the nipple and carry blood to the internal mammary, axillary, and intercostal veins, and to the lungs. These connections can allow breast cancer cells to travel to the lungs via these surface veins to form metastatic tumors. The intercostal veins join a complex network of vertebral veins in and around the spine, providing an additional path for cancer to spread to bone.

The veins draining the breast parenchyma are subject to inﬂammation and thrombosis as in other areas in the body. This can result in Mondor disease and thrombophlebitis, respectively.