Transurethral resection of the prostate (TURP) is currently the most popular approach for the surgical treatment of benign prostatic hyperplasia (BPH). It has the advantage of being an endoscopic procedure that avoids an abdominal or perineal incision and is associated with earlier ambulation and faster convalescence than the “open” approaches. It is appropriate for the treatment of small to moderate size (75 g) prostatic enlargement and is technically more sophisticated than the open surgical procedures. With benign prostatic enlargement, the objective is complete removal of the adenomatous tissue to the surgical (false) capsule, but in cases of urethral obstruction due to advanced prostatic cancer, a “channel” TURP is performed to reestablish urethral patency.

The TURP was developed in the 1920s after the invention of incandescent light, the cystoscope, and high-frequency electrical current. It is considered the standard for the surgical treatment of BPH. Classically, transurethral prostatectomy employs a wire loop through which a high-frequency current is used to cut and coagulate tissue. The resectoscope is operated entirely by one hand, leaving the other hand free for insertion of a ﬁnger into the rectum to elevate the prostate. With the patient in lithotomy position, the penile urethra is calibrated with a bougie á boule to ensure that it is sufﬁcient in size to accept a large cystoscope. If it is not, the cystoscope can be inserted through a perineal urethrostomy into the more commodious bulbar urethra. To reduce back strain on the surgeon, a video camera is commonly used to visualize the procedure. 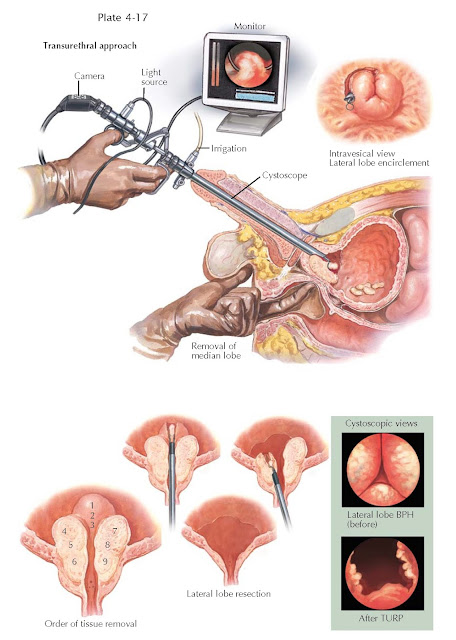 Adenoma resection should be performed in a step-wise, orderly fashion and typically begins at the bladder neck as described by Nesbitt. The adenoma is resected at the bladder neck around its circumference until the circular ﬁbers of this structure are visible. Many surgeons also resect the intravesical median lobe at this point (as illustrated), to increase irrigant ﬂow and overall visibility for the remainder of the procedure. Next, one of the lateral lobes is chosen for resection. The resectoscope is placed immediately proximal to the verumontanum to minimize damage to the external urethral sphincter and tissue resection starts at the 12-o’clock position to allow the remaining lateral lobe tissue to “fall into” the prostatic fossa. With each excursion of the cutting loop, a “boat-shaped” piece of adenomatous tissue is cut away and allowed to fall into the bladder. Bleeding is controlled by application of a hemostatic current through the wire cautery loop. Resection proceeds to the 6-o’clock position and is carried down to the false or surgical capsule, which appears more ﬁbrous than the granular adenoma. The other lateral lobe is then similarly approached. The ﬁnal part of the procedure involves careful tissue removal from the ﬂoor of the prostate and from the prostatic apex near the external sphincter while preserving the verumontanum. At the end of the procedure, accumulated tissue in the bladder is aspirated through the sheath of the instrument, followed by the insertion of a Foley catheter. The catheter remains in place for 24 to 48 h and obstructing blood clots are minimized with continuous bladder irrigation if needed.

Sequelae of TURP include bleeding requiring transfusion or reoperation, urethral or bladder neck strictures, retrograde ejaculation, incontinence, and erectile dysfunction. Dilutional hyponatremia (TURP syndrome) occurs in 2% of cases when isotonic water is used as an irrigant and results from systemic absorption of water as a consequence of prolonged (1.5 hours) resection time, resection of large glands, or early penetration of the surgical prostatic capsule. The syndrome is characterized by confusion, nausea, vomiting, hypertension, bradycardia, and visual disturbance and can be lethal if not carefully treated with 3% saline solution and diuresis.

Recent variations on the classic TURP include the use of bipolar instead of monopolar electrocautery that can be used with saline irrigation instead of hyponatremic water. Methods that employ tissue vaporization (TUVP) and desiccation, as well as laser-induced destruction of tissue (Nd: YAG, KTP, holmium, and diode), in lieu of fulguration have also been developed to reduce hematuria and catheterization time. Many minimally invasive methods of treating BPH have also been described that may reduce the adverse effects of TURP but do not appear to offer the same quality or durability. These include intraprostatic stents, transurethral needle ablation of the prostate using radiofrequency energy, and transurethral microwave therapy.