THE BREAST: POSITION AND STRUCTURE

THE BREAST: POSITION AND STRUCTURE

The breast is shown in its partially dissected state in the upper part of the plate and below in sagittal section. The size of the breast is variable, but in most instances it extends from the second through the sixth rib, and from the sternum to the anterior axillary line, with an axillary tail in the outer and upper portions, which can be palpated along the outer border of the pectoralis major muscle. The mammary tissue lies directly over the pectoralis major muscle and is separated from the outer fascia of this muscle by a layer of adipose tissue, which is continuous with the fatty stroma of the gland itself.

Fatty deposits surround and intermix with the glandular elements and make up a signiﬁcant portion of the breast structure, providing much of its bulk and shape. The ratio of fatty to glandular tissue varies among individuals and with the stage of life; with menopause, the relative amount of fatty tissue increases as the glandular tissue declines. A rich vascular and lymphatic network (discussed subsequently) supplies the breasts. 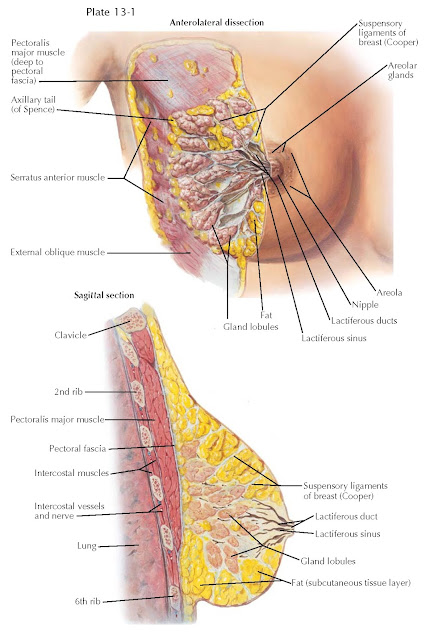 The center of the dome-shaped, fully developed breast in the adult woman is marked by the areola mammae, a circular, pigmented skin area from 1.5 to 2.5 cm in diameter. The surface of the areola appears rough because of large, somewhat modiﬁed sebaceous glands, the glands of Montgomery, which are located directly beneath the skin in the thin subcutaneous tissue layer. The fatty secretion of these glands is said to lubricate the nipple. Bundles of smooth muscles in the areolar tissue serve to stiffen the nipple for a better grasp by the suckling infant.

The nipple or mammary papilla is elevated a few millimeters above the breast and contains 15 to 20 lactiferous ducts surrounded by ﬁbromuscular tissue and covered by wrinkled skin. Partly within this compartment of the nipple and partly below its base, these ducts expand to form the short sinus lactiferi or ampullae in which the milk may be stored. These ampullae are the continuation of the mammary ducts, which extend radially from the nipple toward the chest wall, and from them sprout variable numbers of secondary tubules. These end in epithelial masses forming the lobules or acinar structures of the breast. The number of tubules and the size of the acinar structures vary greatly in different individuals and at different periods in life. In general, the terminal tubules and acinar structures are most numerous during the childbearing period and reach their full physiologic development only during pregnancy and lactation. These epithelial structures constitute collectively the parenchyma of the gland. The stroma is composed of a mixture of ﬁbrous and fatty tissue, and, in the absence of pregnancy and lactation, the relative amounts of fatty and ﬁbrous tissue determine the size and consistency of the breast.

The enveloping fascia of the breast is continuous with the pectoral fascia. It subdivides the glands into lobules and sends strands into the overlying skin, which, in the upper hemisphere, are known as the suspensory ligaments of Cooper. Because these strands are not taut, they allow for the natural motion of the breast, but result in breast ptosis as these ligaments relax with age.