THE BREAST: FUNCTIONAL CHANGES AND LACTATION

THE BREAST: FUNCTIONAL CHANGES AND LACTATION

The maturational changes in hormones from the anterior pituitary gland and ovary are major factors in the development and functioning of the mammary gland. Follicle-stimulating and luteinizing hormones are indispensable for the production of ovarian estrogen and progesterone, which, in turn, control mammary gland development. These are necessary but not sufﬁcient to prepare the breast for lactation.

The mammary gland of a nonpregnant woman is inadequately prepared for secretory activity. Only during pregnancy do those changes normally occur that make milk production possible. In the ﬁrst trimester of pregnancy, the terminal tubules sprouting from the mammary ducts proliferate in order to provide a maximum number of epithelial elements for future acinar formation. In the midtrimester, the reduplicated terminal tubules are grouped together to form large lobules. Their lumina begin to dilate, and the acinar structures thus formed are lined by cuboidal epithelium; occasional acini contain small amounts of colostrum secretion. In the last third of pregnancy, the acini formed in early and midpregnancy are progressively dilated. The high levels of circulating estrogens and progesterone during pregnancy are responsible for these alterations in the breast. 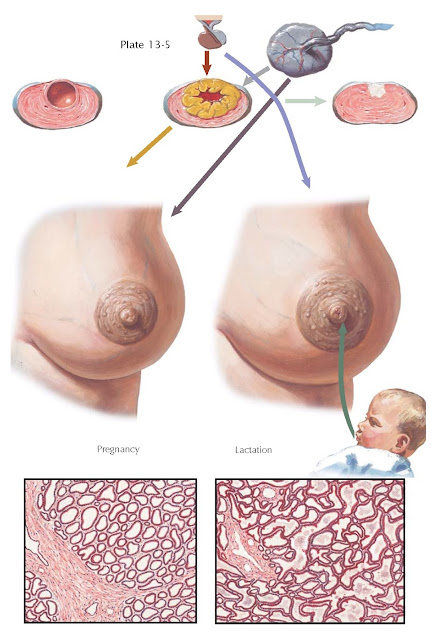 During pregnancy, as estrogen levels increase, there is a parallel hypertrophy and hyperplasia of the pituitary lactotrophs. An increase in prolactin occurs soon after implantation, concomitant with the increase in circulating estrogen. Circulating levels of prolactin steadily increase throughout pregnancy, peaking at about 200 ng/mL during the third trimester. This rise is in parallel with the continued increase in circulating estrogen levels over this time. Despite these elevated prolactin levels, lactation does not occur because estrogen inhibits the action of prolactin on the breast (most likely blocking interaction with the prolactin receptor).

Following childbirth, active secretion begins in the now maximally dilated acinar structures as a result of the stimulation by prolactin from the anterior pituitary gland and by the nursing of the infant. A day or two following delivery of the placenta, both estrogen levels and prolactin levels decline rapidly and lactation is initiated. Prolactin levels reach basal concentrations after 2 to 3 weeks in women who do not breastfeed. In nursing women, basal levels of prolactin decline to the nonpregnant range within 6 months after parturition; after each act of suckling, prolactin increases markedly.

Lactation, starting 3 to 4 days after delivery, is stimulated and maintained through the mechanical act of sucking. In addition to prompting a pulse in prolactin, stimulation of the areola causes the secretion of oxytocin, which is responsible for the letdown reﬂex and ductal contraction that expels the milk. Therefore, it is through these feedback mechanisms that suckling ensures further milk production.

Prolactin has not been shown to affect the macro or microscopic changes in the gland. Its only function is to stimulate milk secretion after the tissues have been previously adequately prepared (by estrogen and progestin). During consistent breastfeeding, follicular ripening and ovulation are suppressed for approximately 6 months.

The secretion of true milk takes place in the epithelial lining of the dilated acini by cuboidal or columnar cells with nuclei at their bases or tips. This epithelium rests on a narrow band of connective tissue that encloses thin-walled capillaries. Secretory globules and desquamated epithelial cells distend the acini and their afferent channels. During the height of lactation, milk secretion and its storage account for one-ﬁfth to one-third of the breast volume.