Knowing When To Make An Immune Response


The vertebrate immune system is a conglomeration of cells and molecules that cooperate to protect us from infectious agents and also provides us with a surveillance system to monitor the integrity of host tissues. Although the immune system is quite elaborate, as we shall see, its function can be boiled down to two basic roles: recognition of foreign substances and organ- isms that have penetrated our outer defences (i.e., the skin epithelium and the mucosal surfaces of the gut and reproductive and respiratory tracts) and elimination of such agents by a diverse repertoire of cells and molecules that act in concert to neutralize the potential threat. Thus, a critical role of the immune system is to determine what is foreign (what immunologists often call “nonself”) from what is normally present in the body (i.e., self ). As a consequence, the cells and molecules that comprise the innate immune system are preoccupied with detecting the presence of particular molecular patterns that are typically associated with infectious agents (Figure 1.2). Charlie Janeway dubbed such molecules pathogen‐associated molecular patterns (PAMPs) and it is these structures that trigger activation of the innate immune system.
In addition to the fundamental roles of recognition and elimination of infectious agents, it is also very useful to be able to learn from encounters with pathogens and to maintain a reserve of cells that are able to respond swiftly to a new infection with a previously encountered microbe. Forewarned is forearmed, and in this situation it may be possible to deliver a decisive blow that ends a nascent infection before it has begun. Fortunately, our immune systems have also acquired this ability, which is what our adaptive immune system excels in, and this property is termed immunological memory. 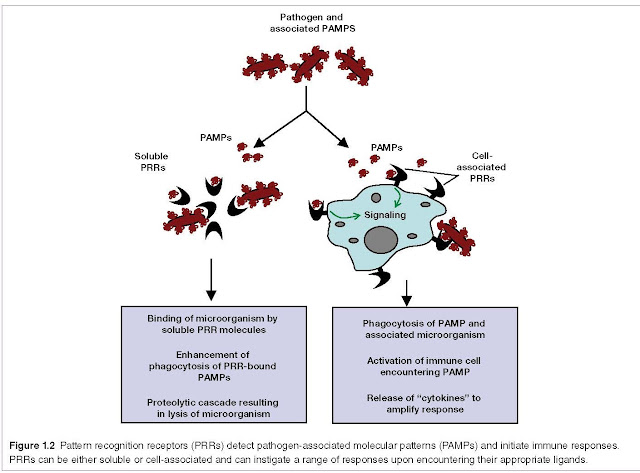 Immune responses need to be proportional to the infectious threat
Having established that recognition, elimination and memory of infectious agents are fundamental to the operation of an effective immune system, there is another important factor, proportionality, which is key to ensuring that everything runs smoothly and that our immune systems do not lose sight of their purpose. This is because, as we shall see, the immune sys- tem can deploy a variety of weapons, each with their own risk of collateral damage, which can sometimes cause as much trouble as the infection itself. In extreme cases, the immune response can be much more destructive than the agent that triggered it (which is what underpins allergy) and in some situations this can lead to a sustained state of chronic immune activation where the immune system becomes confused between what is self and nonself and mounts sustained responses against its own tissues (called autoimmunity). Thus, there is a cost– benefit analysis that must be conducted during the initial stages of an infection to ascertain the nature of the infection, the level of infection, and whether the infectious agent is perturbing tissue function (by triggering cell death for example).
For these reasons, a number of immune regulatory mechanisms exist to ensure that immune responses are proportional to the level of threat that a particular infectious agent poses, as well as to ensure that immune responses are not directed against self and that responses directed against nonself are terminated when the infectious agent has been successfully eliminated from the body. Immune regulatory mechanisms (or immune checkpoints) set thresholds for the deployment of immune responses and are vital to the proper operation of the immune system. As we shall see in later chapters, many diseases are caused by the failure of immune checkpoints, leading to conditions such as rheumatoid arthritis, Crohn’s disease, and even cancer.
Tissue damage can also instigate an immune response
Aside from infection, there is a growing recognition that tissue damage, leading to nonphysiological cell death, can also provoke activation of the immune system (Figure 1.3). In this situation, the molecules that activate the immune system are derived from self but are not normally present within the extra- cellular space, or in a particular cellular compartment (for example when mitochondrial DNA is released into the cytoplasm). Such molecules, for which Polly Matzinger coined the term danger signals, are normally safely sequestered within healthy cells and organelles and only escape when a cell dies via an uncontrolled mode of cell death, called necrosis (see Videoclip 1). Necrosis is typically caused by tissue trauma, burns, certain toxins, as well as other nonphysiological stimuli, and is characterized by rapid swelling and rupture of the plasma membranes of damaged cells. This permits the release of multiple cellular constituents that do not normally escape from healthy cells or organelles. 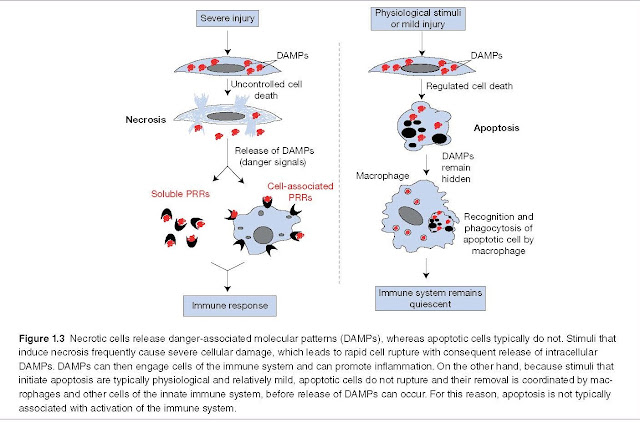 The precise identity of the molecules that act as danger signals – now more commonly called danger‐associated molecular patterns (DAMPs) or alarmins is an area of active investigation at present, but molecules such as HMGB1, a chromatin‐binding protein, as well as the immunological messenger proteins interleukin‐1α (IL‐1α) and IL‐33, represent good candidates. It might seem surprising that the immune system can also be activated by self‐derived molecules, how- ever, this makes good sense when one considers that events leading to necrotic cell death are often rapidly followed or accompanied by infection. Furthermore, if a pathogen man- ages to evade direct detection by the immune system, its presence will be betrayed if it provokes necrosis within the tissue it has invaded.
Before moving on, we should also note that there is another mode of cell death that frequently occurs in the body that is both natural and highly controlled and is not associated with plasma membrane rupture and release of intracellular contents. This mode of cell death, called apoptosis (see Videoclip 2), is under complex molecular control and is used to eliminate cells that have reached the end of their natural lifespans. Apoptotic cells do not activate the immune system because cells dying in this manner display molecules on their plasma membranes (e.g., phosphatidylserine) that mark these cells out for removal through phagocytosis before they can rupture and release their intracellular contents. In this way, DAMPs remain hidden during apoptosis an such cells do not activate the immune system (Figure 1.3).