Overview Of The Cardiovascular System


Overview Of The Cardiovascular System
The cardiovascular system is composed of the heart, blood vessels and blood. In simple terms, its main functions are:
1   Distribution of O2 and nutrients (e.g. Glucose, amino acids) to all body tissues
2   Transportation of CO2 and metabolic waste products (e.g. Urea) from the tissues to the lungs and excretory organs
3   Distribution of water, electrolytes and hormones throughout the body
4   Contributing to the infrastructure of the immune system
5   Thermoregulation.


Blood is composed of plasma, an aqueous solution containing electrolytes, proteins and other molecules, in which cells are suspended. The cells comprise 40–45% of blood volume and are mainly erythrocytes, but also white blood cells and platelets. Blood volume is about 5.5 L in an ‘average’ 70-kg man.
Figure 1 illustrates the ‘plumbing’ of the cardiovascular system. Blood is driven through the cardiovascular system by the heart, a muscular pump divided into left and right sides. Each side contains two chambers, an atrium and a ventricle, composed mainly of cardiac muscle cells. The thin-walled atria serve to fill or ‘prime’ the thick-walled ventricles, which when full constrict forcefully, creating a pressure head that drives the blood out into the body. Blood enters and leaves each chamber of the heart through separate one-way valves, which open and close reciprocally (i.e. one closes before the other opens) to ensure that flow is unidirectional. 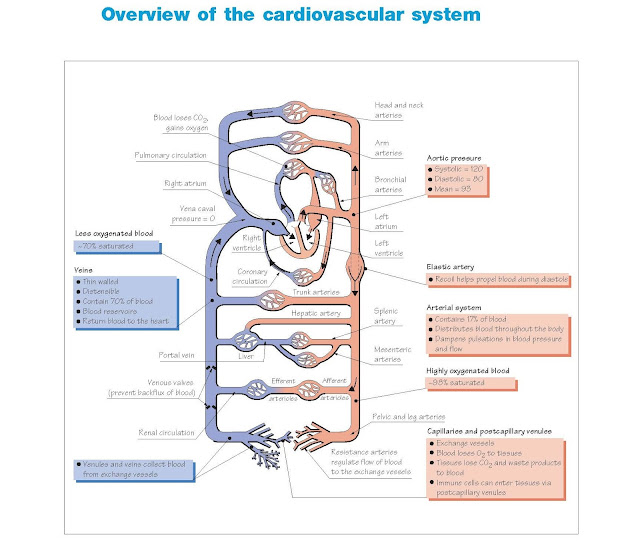 Consider the flow of blood, starting with its exit from the left ventricle.
When the ventricles contract, the left ventricular internal pressure rises from 0 to 120 mmHg (atmospheric pressure = 0). As the pressure rises, the aortic valve opens and blood is expelled into the aorta, the first and largest artery of the systemic circulation. This period of ventricular contraction is termed systole. The maximal pressure during systole is called the systolic pressure, and it serves both to drive blood through the aorta and to distend the aorta, which is quite elastic. The aortic valve then closes, and the left ventricle relaxes so that it can be refilled with blood from the left atrium via the mitral valve. The period of relaxation is called diastole. During diastole aortic blood flow and pressure diminish but do not fall to zero, because elastic recoil of the aorta continues to exert a diastolic pressure on the blood, which gradually falls to a minimum level of about 80 mmHg. The difference between systolic and diastolic pressures is termed the pulse pressure. Mean arterial blood pressure (MABP) is pressure averaged over the entire cardiac cycle. Because the heart spends approximately 60% of the cardiac cycle in diastole, the MABP is approximately equal to the diastolic pressure + one-third of the pulse pressure, rather than to the arithmetic average of the systolic and diastolic pressures.
The blood flows from the aorta into the major arteries, each of which supplies blood to an organ or body region. These arteries divide and subdivide into smaller muscular arteries, which eventually give rise to the arterioles – arteries with diameters of <100 µm. Blood enters the arterioles at a mean pressure of about 60– 70 mmHg.
The walls of the arteries and arterioles have circumferentially arranged layers of smooth muscle cells. The lumen of the entire vascular system is lined by a monolayer of endothelial cells. These cells secrete vasoactive substances and serve as a barrier, restricting and controlling the movement of fluid, molecules and cells into and out of the vasculature.
The arterioles lead to the smallest vessels, the capillaries, which form a dense network within all body tissues. The capillary wall is a layer of overlapping endothelial cells, with no smooth muscle cells. The pressure in the capillaries ranges from about 25 mmHg on the arterial side to 15 mmHg at the venous end. The capillaries converge into small venules, which also have thin walls of mainly endothelial cells. The venules merge into larger venules, with an increasing content of smooth muscle cells as they widen. These then converge to become veins, which progressively join to give rise to the superior and inferior venae cavae, through which blood returns to the right side of the heart. Veins have a larger diameter than arteries, and thus offer relatively little resistance to flow. The small pressure gradient between venules (15 mmHg) and the venae cavae (0 mmHg) is therefore sufficient to drive blood back to the heart.
Blood from the venae cavae enters the right atrium, and then the right ventricle through the tricuspid valve. Contraction of the right ventricle, simultaneous with that of the left ventricle, forces blood through the pulmonary valve into the pulmonary artery, which progressively subdivides to form the arteries, arterioles and capillaries of the pulmonary circulation. The pulmonary circulation is shorter and has a much lower pressure than the systemic circulation, with systolic and diastolic pressures of about 25 and 10 mmHg, respectively. The pulmonary capillary network within the lungs surrounds the alveoli of the lungs, allowing exchange of CO2 for O2. Oxygenated blood enters pulmonary venules and veins, and then the left atrium, which pumps it into the left ventricle for the next systemic cycle.
The output of the right ventricle is slightly lower than that of the left ventricle. This is because 1-2% of the systemic blood flow never reaches the right atrium, but is shunted to the left side of the heart via the bronchial circulation (Figure 1) and a small fraction of coronary blood flow drains into the thebesian veins (see Chapter 2).

Blood vessel functions
Each vessel type has important functions in addition to being a conduit for blood.
The branching system of elastic and muscular arteries progressively reduces the pulsations in blood pressure and flow imposed by the intermittent ventricular contractions.
The smallest arteries and arterioles have a crucial role in regulating the amount of blood flowing to the tissues by dilating or constricting. This function is regulated by the sympathetic nervous system, and factors generated locally in tissues. These vessels are referred to as resistance arteries, because their constriction resists the flow of blood.
Capillaries and small venules are the exchange vessels. Through their walls, gases, fluids and molecules are transferred between blood and tissues. White blood cells can also pass through the venule walls to fight infection in the tissues.
Venules can constrict to offer resistance to the blood flow, and the ratio of arteriolar and venular resistance exerts an important influence on the movement of fluid between capillaries and tissues, thereby affecting blood volume.
The veins are thin walled and very distensible, and therefore contain about 70% of all blood in the cardiovascular system. The arteries contain just 17% of total blood volume. Veins and venules thus serve as volume reservoirs, which can shift blood from the peripheral circulation into the heart and arteries by constricting. In doing so, they can help to increase the cardiac output (volume of blood pumped by the heart per unit time), and they are also able to maintain the blood pressure and tissue perfusion in essential organs if haemorrhage (blood loss) occurs.