The brain is the controller of the nervous system, but it is also one of the most important endocrine glands. Specialized nerve cells, notably in the hypothalamus, synthesize hormones which are transported along the axon to the nerve terminal. Here they are released into the portal blood system, which carries them to the pituitary gland. In some cases, the axon of the neuroendocrine cell projects down to the pituitary cell itself. The principal hypothalamic neurohormones are: 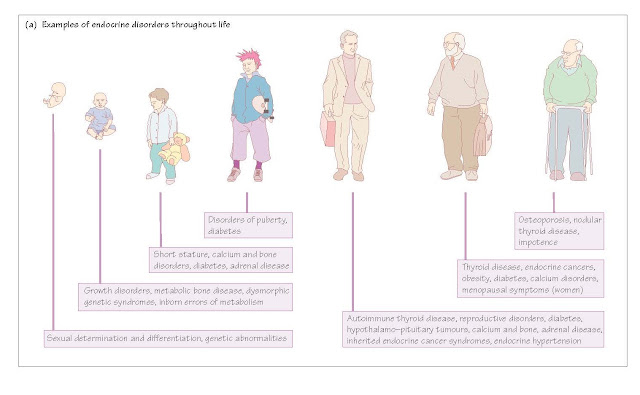 The pituitary gland is composed of two lobes, anterior and posterior, which arise from different embryological origins – the anterior originates from the embryonic oral cavity and the posterior from the base of the brain (i.e. a neural origin). The two lobes become closely apposed to each other to form the pituitary gland. Humans have a non-functional intermediate lobe, which is much larger in some other animals. The principal hormones of the pituitary are:
1 anterior:
1. corticotrophin (adrenocorticotrophic hormone; ACTH) releases glucocorticoids and other steroids from the adrenal cortex;
2. follicle-stimulating hormone (FSH) promotes spermatogenesis in males andovarian follicular maturation in females;
3. luteinizing hormone (LH) promotes testosterone synthesis in males and causes ovarian follicular rupture and ovulation in females;
4. prolactin (PRL) promotes lactation and may have an immunomodulatory role in non-lactating females and males;
5. thyrotrophin (thyroid-stimulating hormone; TSH) pro- motes thyroid hormone production and release from the thyroid gland;
6. growth hormone (also called somatotrophin; GH) pro- motes muscle and skeletal growth.
2 posterior:
(a)    oxytocin causes milk ejection and contraction of the uterus in labour;
(b)   vasopressin (antidiuretic hormone, ADH) promotes water reabsorption from the renal tubules.
The thyroid gland is situated just in front of the trachea in humans. The thyroid-hormone-producing cells are arranged in follicles, and concentrate iodine which is used for the synthesis of the thyroid hormone. The circulating hormones are thyroxine (T4) and tri-iodothyronine (T3). The parathyroid glands are embedded in the thyroid, and produce parathyroid hormone (parathormone; PTH). PTH is important in the control of calcium and phosphate metabolism. The parafollicular cells are in the thyroid, scattered between the follicles. They produce calcitonin, which inhibits bone calcium resorption.
The adrenal glands are situated just above the kidneys, and are composed of an outer layer, or cortex, and an inner layer, or medulla (a modified ganglion). The hormones produced are:
1    cortex:
(a)    glucocorticoids, principally cortisol in humans, are involved in carbohydrate metabolism and the response to stress;
(b)   mineralocorticoids, principally aldosterone, control electrolyte balance;
(c)    androgens, principally testosterone, dehydroepiandrostenedione sulphate (DHEAS) and 17-hydroxyprogesterone, modulate secondary sexual characteristics and have anabolic effects.
2    medulla:
(a)    epinephrine modulates cardiovascular and metabolic response to stress;
(b) norepinephrine, principally a neurotransmitter in the peripheral sympathetic nervous system;
(c)    dopamine, a neurotransmitter in the autonomic nervous system.
The endocrine pancreas consists of islet cells scattered in the larger exocrine pancreas, which lies posteriorly in the upper abdomen. (‘Exocrine’ refers to glands which have ducts, and which are not covered in this book.) The endocrine pancreas secretes:
1         insulin, which regulates glucose and lipid metabolism;
2         glucagon, a counter-regulatory hormone to insulin that elevates blood glucose;
3         somatostatin, which regulates gastrointestinal motility;
4         pancreatic polypeptide, which regulates gastrointestinal secretion.
The ovary is the major female reproductive gland, and produces:
1        estrogens, which regulate reproductive function and secondary sexual characteristics;
2        progesterone, which stimulates endometrial vascularization and maintains pregnancy;
3    relaxin, a polypeptide also found in the placenta and uterus, which may be important in parturition by softening the cervix and relaxing the pelvic ligaments;
4       inhibin, which inhibits FSH production.
The placenta is the organ of pregnancy serving the developing fetus. Hormones produced by the placenta include:
(a)  chorionic gonadotrophin (CG; hCG; h = human) which maintains placental progesterone synthesis;
(b) placental lactogen (PL);
(c)  estriol, the major form of estrogen secreted by the placenta;
(d) progesterone which maintains the reproductive organs in pregnancy;
(e)  relaxin.
The testis is the major male reproductive gland, producing:
1   testosterone which controls reproductive function and secondary sexual characteristics;
2   inhibin, which inhibits FSH secretion;
3  Müllerian inhibiting hormone (MIH), a fetal hormone which dedifferentiates the Müllerian duct.
The gastrointestinal tract (GIT) is the largest endocrine organ and produces several autocrine, paracrine and endocrine hormones including:
1    cholecystokinin (CCK);
2    gastric inhibitory peptide (GIP);
3    gastrin;
4    neurotensin;
5    secretin;
6    substance P;
7    vasoactive intestinal peptide (VIP).
Adipocytes produce the peptide hormone leptin which is important in the control of feeding and energy expenditure.
The kidney produces hormones involved in the control of blood pressure and in erythropoiesis. Renin cleaves angiotensinogen to angiotensin I in the kidney and plasma. Erythropoietin stimulates production of red blood cells in the marrow.
The skin, liver and kidney produce vitamin D which has certain endocrine functions.
The heart produces atrial natriuretic peptide. Circulating blood elements, including macrophages, produce peptides such as the cytokines, which are involved in immune function.
The pineal gland is situated in the brain and is involved with rhythms, for example the reproductive rhythms of animals which breed seasonally. Its role in humans is not known for certain. The pineal gland produces melatonin.
Readers should be aware that putative endocrine hormones continue to be reported.