The Thoracic Cage And Respiratory Muscles


The Thoracic Cage And Respiratory Muscles
Thoracic cage
The thoracic cage is composed of the sternum, ribs, intercostal spaces and thoracic vertebral column, with the diaphragm dividing the thorax from the abdomen.


The sternum
The dagger-shaped sternum has three parts. The manubrium, with which the firs and upper parts of the second costal cartilage and the clavicle articulate (Fig. 2a), lies at the level of the third and fourth thoracic vertebrae (see Fig. 1b). The lower parts of the second and third to seventh ribs articulate with the body of the sternum (level with T5-T8). The angle between the manubrium and body at the cartilaginous manubriosternal joint forms the sternal angle (angle of Louis), and this is a useful anatomical reference point. The small xiphoid process (xiphisternum) usually remains cartilaginous well into adult life. 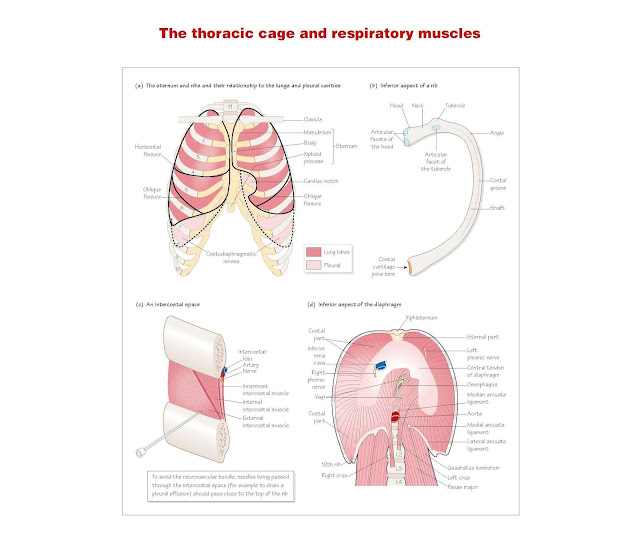 The ribs and intercostal space
The first 7 (true or vertebrosternal) of the 12 pairs of ribs are connected to the sternum by their costal cartilages. The hyaline cartilages of the eighth, ninth and tenth (false or vertebrochondral) ribs articulate with the cartilage above, and the eleventh and twelfth are free (ﬂoating or vertebral ribs). A typical rib (Fig. 2b) has a head with two facets for articulation with the corresponding vertebra, the intervertebral disc and the vertebra above. The rib also articulates at the tubercle with the transverse process of the corresponding vertebra. The two articular regions act like a hinge, forcing the rib to move through an axis passing through these areas. The flattene shaft of the rib is weakest at the angle of the rib and this is where it tends to fracture in an adult. The upper two ribs, protected by the clavicle and the two floatin ribs, are least likely to fracture. There is a cervical rib attached to the transverse process of C7 in 0.5% of people, and the presence of this rib may cause paraesthesiae or vascular problems, due to pressure on the brachial plexus or subclavian artery.
Intercostal spaces contain external intercostal muscles whose fibres pass downwards and forwards between the ribs, internal intercostal muscles whose fibres pass downwards and backwards and an incomplete innermost intercostal layer (Fig. 2c). They are innervated by intercostal nerves, which are the anterior primary rami of thoracic nerves. Intercostal veins, arteries and nerves lie in grooves on the undersurface of the corresponding rib, with the vein above, artery in the middle and nerve below.

The diaphragm
The dome-shaped diaphragm (Fig. 2d) separates the thorax and abdomen and consists of a muscular peripheral part and a central tendon, which is partly fused with the pericardium. The muscular diaphragm takes its origin from the vertebrae and arcuate ligaments, the rib cage and the sternum. The right crus arises from the upper three lumbar vertebrae and the left crus from the upper two lumbar vertebrae. Their fibrous medial borders form the median arcuate ligament over the front of the aorta. The medial and lateral arcuate ligaments are thickenings of the fascia overlying the psoas major and quadratus lumborum, respectively. The costal part of the diaphragm is attached to the inner aspects of the seventh to twelfth ribs and costal cartilages.
The sternal part originates as two slips from the back of the xiphis- ternum. The phrenic nerves (C3, 4, 5) supply motor fibres Sensory innervation of the central diaphragm also runs in the phrenic, and pain from irritation of the diaphragm is often referred to the corresponding dermatome for C4, the shoulder-tip. The lower intercostal nerves sup- ply sensory fibre to the peripheral diaphragm. The aorta, thoracic duct and azygos vein pass through the diaphragm at the aortic opening at the level of T12. The oesophagus, branches of the left gastric artery and vein and both vagi pass through the oesophageal opening at the level of T10, and the inferior vena cava and right phrenic nerve pass through an opening at the level of T8.

Muscles of respiration
All inspiratory muscles act to increase thoracic volume, causing intrapleural and alveolar pressure to fall to create an alveolar-mouth pressure gradient, drawing air into the lungs. The expanded chest wall and lungs will recoil by themselves and quiet breathing uses no expiratory muscles.
The main inspiratory muscle, the diaphragm, moves down when it contracts, by about 1.5 cm during quiet breathing and 6-7 cm during deep breathing. During quiet breathing, the first rib remains fairly still and the intercostal muscles elevate and evert the succeeding ribs. The intercostal muscles also stiffen the intercostal spaces preventing them from being sucked in during inspiration. The scalene muscles, which insert into the first two ribs, are also active in normal inspiration. Raising the upper ribs pushes the sternum forward (the pump action) increasing the anterior-posterior diameter of the chest, and as the sloping lower ribs rise, they move out (the bucket-handle action) and the transverse diameter of the chest wall increases.
In quiet breathing in adults, ventilation is largely diaphragmatic. As the diaphragm contracts, it squashes the abdominal contents and raises intra-abdominal pressure, pushing out the abdominal wall and lower ribs. Consequently, in normal breathing the chest wall and the abdominal wall move out together during inspiration. If the diaphragm is paralysed, increased chest volume is produced entirely by raising the ribs, and as intrathoracic pressure falls in inspiration, the faccid diaphragm is sucked into the chest and the abdomen moves in. This out-of-phase movement of the chest and abdominal walls is known as paradoxical breathing. In a high cervical cord transection, all respiratory muscles are paralysed, but when the damage is below the phrenic nerve roots (C3, 4, 5) breathing continues via the diaphragm alone. In the newborn, ribs are horizontal, so rib movements cannot increase the volume of the chest and breathing is entirely by the up-and-down action of the diaphragm or so-called abdominal breathing. As the ribs become more oblique with increasing age, there is an increased contribution of thoracic breathing.
When ventilation or resistance to breathing is increased, accessory inspiratory muscles aid inspiration. These include the scalene muscles, sternomastoids and serratus anterior. If the arms are f xed by grasping the edge of a table, contraction of the pectoralis major, which normally adducts the arm, helps expand the chest. When ventilation exceeds about 40 U min, there is activation of expiratory muscles, especially abdominal muscles (rectus abdominis, external and internal oblique), which speeds up recoil of the diaphragm by raising intra-abdominal pressure.