Structure Of The Respiratory System: Lungs, Airways And Dead Space


Structure Of The Respiratory System: Lungs, Airways And Dead Space
Lungs
The respiratory system consists of a pair of lungs within the thoracic cage (Chapter 2). Its main function is gas exchange, but other roles include speech, filtration of microthrombi arriving from systemic veins and metabolic activities such as conversion of angiotensin I to angiotensin II and removal or deactivation of serotonin, bradykinin, norepinephrine, acetylcholine and drugs such as propranolol and chlorpromazine. The right lung is divided by transverse and oblique ﬁssures into three lobes: upper, middle and lower. The left lung has an oblique ﬁssure and two lobes (Fig. 1a). Vessels, nerves and lymphatics enter the lungs on their medial surfaces at the lung root or hilum. Each lobe is divided into a number of wedge-shaped bronchopulmonary segments with their apices at the hilum and bases at the lung surface. Each bronchopulmonary segment is supplied by its own segmental bronchus, artery and vein and can be removed surgically with little bleeding or air leakage from the remaining lung.


The pulmonary nerve plexus lies behind each hilum, receiving fibre from both vagi and the second to fourth thoracic ganglia of the sympathetic trunk. Each vagus contains sensory afferents from lungs and airways, parasympathetic bronchoconstrictor and secretomotor efferents, and non-cholinergic non-adrenergic nerves (NANC). Sympathetic noradrenergic fibre supplying airway smooth are sparse in humans, and the β2-adrenergic receptors are stimulated by circulating catecholamines from the adrenal glands (Chapter 7). 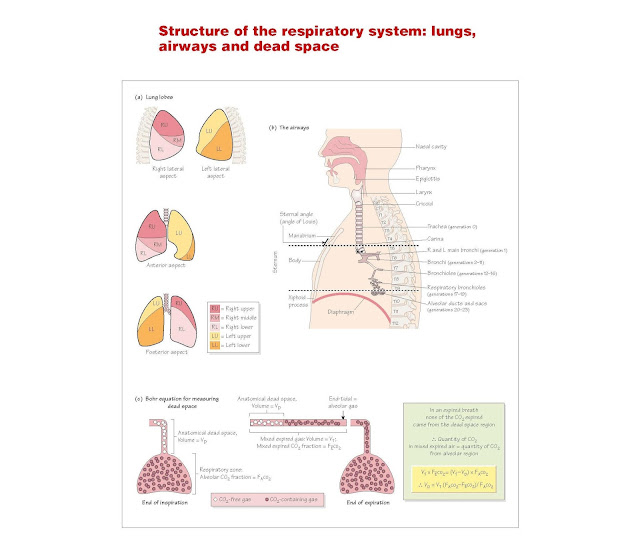 Each lung is lined by a thin membrane, the visceral pleura, which is continuous with the parietal pleura, lining the chest wall, diaphragm, pericardium and mediastinum. The space between the parietal and visceral layers is tiny in health and lubricated with pleural fluid. The right and left pleural cavities are separate and each extends as the costodiaphragmatic recess below the lungs even during full inspiration. The parietal pleura is segmentally innervated by intercostal nerves and by the phrenic nerve, and so pain from pleural inflammation (pleurisy) is often referred to the chest wall or shoulder-tip. The visceral pleura lacks sensory innervation.
Lymph channels are absent in alveolar walls, but accompany small blood vessels conveying lymph towards the hilar bronchopulmonary nodes and from there to tracheobronchial nodes at the tracheal bi- furcation. Some lymph from the lower lobe drains to the posterior mediastinal nodes.
The upper respiratory tract consists of the nose, pharynx and larynx. The lower respiratory tract (Fig. 1b) starts with the trachea at the lower border of the cricoid cartilage, level with the sixth cervical vertebra (C6). It bifurcates into right and left main bronchi at the level of the sternal angle and T4/5 (lower when upright and in inspiration). The right main bronchus is wider, shorter and more vertical than the left, so inhaled foreign bodies enter it more easily.
Airways
The airways divide repeatedly, with each successive generation approximately doubling in number. The trachea and main bronchi have U-shaped cartilage, linked posteriorly by smooth muscle. Lo- bar bronchi supply the three right and two left lung lobes and divide to give segmental bronchi (generations 3 and 4). The total cross- sectional area of each generation is minimum here, after which it rises rapidly, as increased numbers more than make up for their reduced size. Generations 5-11 are small bronchi, the smallest being 1 mm in diameter. The lobar, segmental and small bronchi are supported by irregular plates of cartilage, with bronchial smooth muscle forming helical bands. Bronchioles start at about generation 12 and from this point onwards cartilage is absent. These airways are embedded in lung tissue, which holds them open like tent guy ropes. The terminal bronchioles (generation 16) lead to respiratory bronchioles, the first generation to have alveoli (Chapter 5) in their walls. These lead to alveolar ducts and alveolar sacs (generation 23), whose walls are entirely composed of alveoli.
The bronchi and airways down to the terminal bronchioles receive nutrition from the bronchial arteries arising from the descending aorta. The respiratory bronchioles, alveolar ducts and sacs are supplied by the pulmonary circulation (Chapter 13).
The airways from trachea to respiratory bronchioles are lined with ciliated columnar epithelial cells. Goblet cells and submucosal glands secrete mucus. Synchronous beating of cilia moves the mucus and associated debris to the mouth (mucociliary clearance) (Chapters 18). Epithelial cells forming the walls of alveoli and alveolar ducts are unciliated, and largely very thin type I alveolar pneumocytes (alveolar cells, squamous epithelium). These form the gas exchange surface with the capillary endothelium (alveolar–capillary membrane). The type II pneumocytes make up only a small proportion of the alveolar surface area and are mostly found at the junction between alveoli. They are stem cells, which can divide following lung damage. They secrete surfactant, which reduces surface tension and has a role in lung immunity (Chapter 6 and 18). A similar substance is produced by the non-ciliated Clara cells found in the bronchiolar epithelium close to their junction with alveoli.

Dead space
The upper respiratory tract and airways as far as the terminal bronchioles do not take part in gas exchange. These conducting airways form the anatomical dead space whose volume (VD) is normally about 150 mL. These airways have an air-conditioning function, warming, filterin and humidifying inspired air.
Alveoli that have lost their blood supply- for example because of a pulmonary embolus - no longer take part in gas exchange and form alveolar dead space. The sum of the anatomical and alveolar dead space is known as the physiological dead space, ventilation of which is wasted in terms of gas exchange. In health, all alveoli take part in gas exchange, so physiological dead space equals anatomical dead space.
The volume of a breath or tidal volume (VT) is about 500 mL at rest. Resting respiratory frequency (f) is about 15 breaths/min, so the volume entering the lungs each minute, the minute ventilation (V' ), is about 7500 mL/min (    500      15) at rest. Alveolar ventilation (V' A) is the volume taking part in gas exchange each minute. At rest, with a  dead-space  volume  of  150  mL,  alveolar  ventilation  is  about  5250 mL/min (    (500     150)     15).
The Bohr method for measuring anatomical dead space is based on the principle that the degree to which dead-space gas (0% CO2) dilutes alveolar gas ( 5% CO2) to give mixed expired gas ( 3.5%) depends on its volume (Fig. 1c). Alveolar gas can be sampled at the end of the breath as endtidal gas. The Bohr equation can be modifiet to measure physiological dead space by using arterial Pco2 to estimate the CO2 in the gas-exchanging or ideal alveoli.