The Pituitary Gland And Gonadotropins


The pituitary is connected to the brain via a small branch of tissue known as the pituitary stalk or infundibulum. The posterior pituitary serves mainly as a storage site for two hormones produced in the hypothalamus: oxytocin and arginine vasopressin (also known as anti- diuretic hormone, ADH). In contrast, the anterior pituitary produces tropic hormones under the regulatory control of the hypothalamus. This control is mediated by neuroendocrine signals from the hypothalamus that travel through rich vascular connections surrounding the pituitary stalk. Blood flowing through this highly vascular plexus delivers signals to the anterior pituitary gland, regulating production and release of its protein products.
There are five cell types in the anterior pituitary that are associated with tropic hormone production: gonadotropes, lactotropes, somatotropes, thyrotropes and corticotropes. These specific cells are responsible for production and secretion of: follicle-stimulating hormone (FSH) and luteinizing hormone (LH); prolactin; growth hormone; thyroid-stimulating hormone (TSH); and adrenocorticotropic hormone (ACTH), respectively. The thyrotropes and gonadotropes closely resemble each other histologically because their secretory products, LH, FSH and TSH, are all glycoprotein hormones that stain with carbohydrate-sensitive reagents. LH and FSH are produced by a single cell type, allowing coupled secretion and regulation by a single releasing factor.
Control of pituitary gland activity comes largely from the hypothalamus with important direct modulation by feedback mechanisms. The hypothalamic nuclei associated with reproduction include the supraoptic, paraventricular, arcuate, ventromedial and suprachiasmatic nuclei. Neurons in two less well-defined areas, the medial anterior hypothalamus and the medial preoptic areas, are also involved. The magnocellular (large) neurons that originate in the supraoptic and paraventricular nuclei project into the posterior pituitary and produce the hormones vasopressin and oxytocin. The parvocellular (small) neurons found in the paraventricular, arcuate and ventromedial nuclei and the periventricular and medial preoptic areas produce regulatory peptides that control the tropic hormones produced by the anterior pituitary.
Those cells in the hypothalamic nuclei that regulate the pituitary have several functions. They receive signals from higher centers in the brain, generate neural signals of their own and have neuroendocrine capabilities. The higher areas of the brain that connect to the hypothalamic nuclei involved with reproduction are the locus ceruleus, the medulla and pons, the midbrain raphe, the olfactory bulb, the limbic system (amygdala and hippocampus), the piriform cortex and the retina. Endogenous opioids also influence hypothalamic function.
The neuroendocrine signals generated within the hypothalamus are mediated by peptide-releasing factors that travel through the hypothalamic–pituitary portal system to their site of action in the pituitary gland. Gonadotropin-releasing hormone (GnRH) is the key tropic hormone for regulating gonadotrope cell function and hence, reproduction. A key neural signal in human reproduction arises from what is known as the GnRH pulse generator. The mechanism by which pulsatile GnRH release controls gonadotropin synthesis and secretion remains poorly defined. At baseline, GnRH secretes from the hypothalamus in pulses at a frequency of approximately one pulse per hour. GnRH pulse frequency is most rapid in the follicular phase, slightly slower in the early luteal phase and slowest in the late luteal phase of the female menstrual cycle. In general, rapid pulse frequencies favor LH secretion and slower pulse frequencies favor FSH release. The relationship between pulse frequency and LH and FSH secretion appears to exist in both women and men. Continuous GnRH release inhibits gonadotrope function. This is the basis for the downregulating activities of long-acting exogenous GnRH agonists and antagonists. 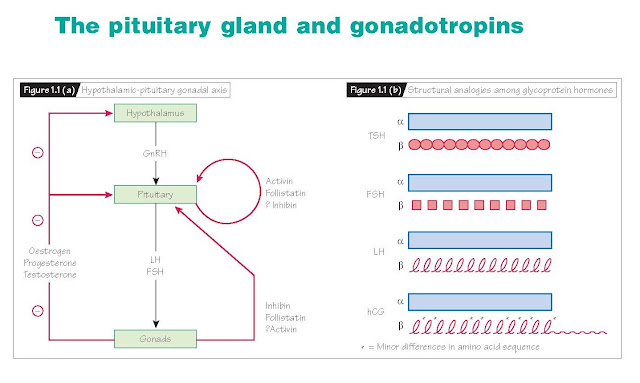 Structure of LH and FSH
LH, FSH and TSH are structurally similar. They are formed by two distinct, noncovalently bound protein subunits called α and β. The pregnancy-specific gonadotropin, human chorionic gonadotropin (hCG), is a fourth glycoprotein formed of α and β chains. The α subunit for all four hormones is identical. The β subunit of each hormone differs, conferring functional specificity on each αβ dimer (Fig. 1.1a and b). The β chains for LH and hCG are the most similar with 82% homology. Carbohydrate side chains on both the α and β chains of LH, hCG and FSH add to structural specificity. The carbo- hydrate chains also influence metabolic clearance rates for the glycoprotein hormones. This effect is most dramatic with the hCG molecule. The β chain of hCG has a 24 amino acid extension at its C terminus that contains four O-linked polysaccharides. This sugar-laden “tail” dramatically slows the clearance of hCG. By prolonging its half-life, the effects of small amounts of this glycoprotein are dramatically enhanced. This characteristic is very important in early pregnancy recognition and maintenance (Chapters 16 and 18).

Regulation of FSH and LH
The biosynthesis and secretion of FSH and LH are tightly controlled within the reproductive cycle. There are multiple ways in which FSH and LH can be regulated, including alterations in gene transcription, mRNA stabilization, rate of protein subunit synthesis, posttranslational glycosylation and changes in the number of gonadotropin- secreting cells.
Gonadal steroids exert negative feedback control over FSH and LH synthesis and secretion. Estrogen, androgen and progesterone receptors are present in the gonadotropin-secreting cells of the pituitary and in some neurons in the hypothalamus. In the pituitary, the gonadal steroids appear to affect the transcription rate of the genes coding for FSH-β, LH-β and the common α subunit. While there is some evidence that steroids can act at the level of the hypothalamic pulse generator, gonadal steroid hormone receptors do not appear to be present in the GnRH-containing cells of the arcuate nucleus.
There is one important exception to the generally inhibitory effect of gonadal steroids on gonadotrope function. In certain situations, estrogen exerts positive feedback on gonadotropin secretion. This is critical to produce the midcycle LH surge in women (Chapter 14) and requires a sustained (>48 h) elevation in circulating estradiol. Estrogen-induced stimulation involves both increased gonadotropin gene expression in the pituitary and alterations in GnRH pulse frequency in the hypothalamus.
Inhibin and activin are closely related peptides produced by the ovary, testes, pituitary gland and placenta that influence gonadotrope function. As suggested by their names, inhibin decreases gonadotrope function and activin stimulates it. Inhibin and activin are formed from common α and β subunits. Inhibin is formed of one α subunit linked to either of two highly homologous β subunits to form inhibin A (αβA) or inhibin B (αβB). Activin is composed of three combinations of the β subunits: activin A (βAβA), activin AB (βAβB) and activin B (βBβB). Activin is a member of the transforming growth factor β (TGF-β) superfamily of growth and differentiation factors that include TGF-β, Müllerian-inhibiting substance (MIS) and bone morphogenic proteins. Follistatin is structurally unrelated to either inhibin or activin. It is a highly glycosylated pituitary peptide that inhibits gonadotrope function but at one-third the potency of inhibin. All three of these peptides have their major influence on the expression of the FSH-β gene. Of these peptides, inhibin appears to be the most biologically important regulator of the FSH gene, directly suppressing its activity. The other two peptides appear to act within the pituitary cells through locally released second messengers or autocrine peptides. Activin B stimulates FSH release. Activins also affect the gonads directly by increasing the activity of the aromatase enzyme in the ovary and stimulating proliferation of spermatogonia in the testes.

Mechanism of action of gonadotropins There are distinct FSH and LH receptors. The latter also bind the closely related hCG molecule. Receptors for both glycoprotein hormones FSH and LH are located in the plasma membranes of the granulosa cells in the ovary and the Sertoli cells in the testes. Ovarian thecal cells and testicular Leydig cells only display LH receptors. In addition to regulating steroidogenesis and gametogenesis, gonadotropins regulate expression of their own receptors in a dose-dependent fashion. FSH also induces LH/hCG receptor formation in granulosa and Sertoli cells.
Although gonadotropin receptors are normally present in very low concentrations on the cell surface, they have high specificity and affinity for their ligands. The interactions between the glycoprotein dimer and its receptor lead to conformational changes in the receptor. This then activates a membrane-associated G protein-coupled signaling system. Although the G protein-coupled cAMP pathway is the principal mediator of both FSH and LH receptor activity, activation of the protein kinase C system can also occur.
In addition to activating specific intracellular signaling processes, binding of the gonadotropin to its receptor also initiates a regulatory function termed desensitization. Desensitization reduces the cell’s responsiveness to ongoing stimulation. In the first phase of desensitization, the gonadotropin receptor becomes “uncoupled” from its down- stream activity so that it no longer activates adenylate cyclase. In the second, slower phase of desensitization, the degradation rate for the receptors is increased. This latter process is called “downregulation.” Both are involved in the activities of GnRH agonists and antagonists.