Bladder: Position, Relations, Gross Structure
The urinary bladder is an expandable reservoir that receives urine from the ureters. When empty, the bladder lies entirely within the lesser pelvis and resembles a ﬂattened, four-sided pyramid with rounded edges. The apex, which corresponds to the tip of the pyramid, is directed anteriorly. Opposite the apex is the base (fundus), the expansive posterior surface. Between the apex and fundus is the body of the bladder, which has a single superior surface, as well as two convex inferolateral surfaces separated by a rounded inferior edge. The bladder’s most inferior and most ﬁxed aspect is known as the neck. It is located just proximal to the outlet, also known as the internal urethral oriﬁce. 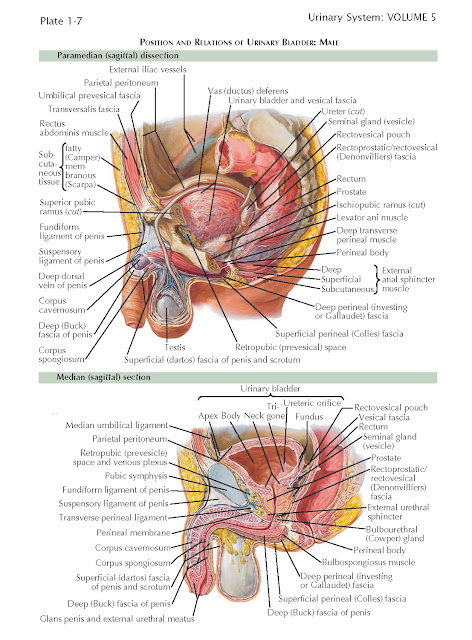 Anatomic Relations
Anterior. The anterior portion of the bladder rests on the pubic symphysis and adjacent bodies of the pubic bones; when empty, the bladder rarely extends beyond their superior margin. Between the pubic bones/ symphysis and the bladder is the retropubic (prevesical) space (of Retzius), which contains a matrix of loose areolar tissue encasing the anterior portions of the vesical and prostatic venous plexuses. This space facilitates extraperitoneal access to the bladder and prostate via suprapubic abdominal incision.
As the bladder ﬁlls with urine, the body expands, causing its anterosuperior aspect to ascend into the extraperitoneal space superior to the pubic crest. The base and neck of the bladder, in contrast, remain relatively constant in both shape and position.
The apex of the empty bladder sends a solid, slender projection known as the median umbilical ligament superiorly along the midline of the abdominal wall, toward the umbilicus. This ligament represents a vestige of the urachus (see Plate 2-33) and rarely possesses a residual allantoic lumen. If a lumen is present, it infrequently may communicate with that of the bladder, but a urachus that is patent from bladder to the umbilicus is very rare.
Superior. The peritoneum covering the anterosuperior aspect of the bladder reﬂects onto the abdominal wall to form the paired supravesical fossae of the peritoneal cavity. These fossae are divided by the median umbilical ligament and bounded laterally by the obliterated umbilical arteries, which form the medial umbilical ligaments. The level of the supravesical fossae (and consequently, the superior extent of the retropubic space) changes with bladder emptying and ﬁlling.
Lateral. The walls of the bladder are covered by peritoneum to the level of the umbilical artery/medial umbilical ligament. The reﬂection of the peritoneum from the lateral walls of the bladder onto the lateral pelvic walls forms the shallow paravesical fossae of the peritoneal cavity. These fossae extend posteriorly to the vasa deferentia in males. In females, they extend to the anterior aspect of the broad ligament, which conveys the round ligaments of the uterus. Inferior to the para- vesical fossae, the loose areolar tissue of the retropubic space continues laterally.
Posterior. In the male, the two seminal glands (vesicles) and ampullae of the vasa deferentia lie between the base of the bladder and the rectum on each side of the midline. These structures are separated from the rectum by the rectoprostatic (rectovesical) fascia cor septum (also known as Denonvilliers fascia). This fascia is continuous with the tough envelopes of the ampullae of the vasa deferentia and seminal glands (vesicles), and it continues posterior to the prostate until it reaches the perineal body.
In the female, the urethra and bladder are separated from the vagina and cervix by the vesicovaginal fascia, which normally contains a small amount of areolar tissue. The vesicovaginal fascia, as well as the rectovaginal fascia (or septum, located posterior to the vagina), together are homologous to the male rectoprostatic (rectovesical) fascia.
In males, the rectoprostatic (rectovesical) fascia is located inferior to the rectovesical pouch, the inferior-most extent of the peritoneal cavity. In the fetus, this pouch is a deeper excavation, which dips posterior to the prostate as far as the pelvic ﬂoor. In females, the rectovaginal fascia is directly inferior to a similar space, termed the recto-uterine pouch (cul-de-sac of Douglas). In the male, the peritoneum extends from the bladder around each side of the rectum toward the sacrum as a pair of sickle-shaped shelves called the sacrogenital (vesicosacral) folds, bounding the pararectal fossae. In the female, the sacrogenital (uterosacral) folds arise from the dorsolateral walls of the uterine cervix (see
Plate 1-6). At the base of the bladder, these folds contain the terminal portions of the ureters and, in the male, the ductus deferens.
Inferior. Except for a variable layer of endopelvic fascia, the neck of the bladder rests directly on the pelvic ﬂoor muscles (e.g., levator ani) in females, whereas in males the prostate gland is interposed between them. In the male, the internal urethral oriﬁce lies about 1 or 2 cm superior to, and 2 cm posterior to, the subpubic angle. In the female, the position of the urethral oriﬁce is slightly more inferior. In the newborn, the bladder is more abdominal than pelvic in position, and the urethral oriﬁce may be situated as far superiorly as the pubic crest. 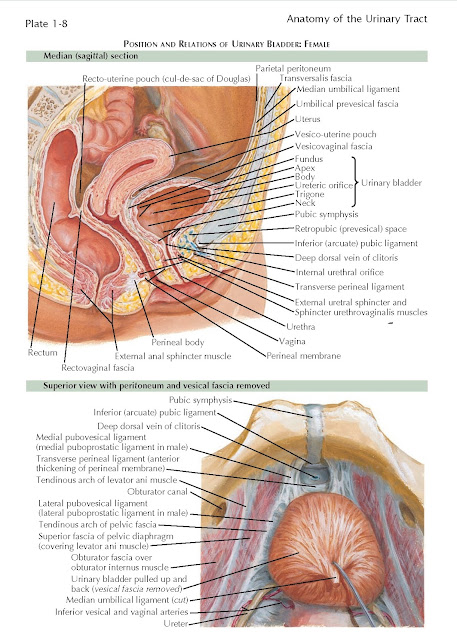 Ligamentous Attachments
The inferior, subperitoneal aspect of the bladder is connected to the pubis by two ligaments originating in the prostatic fascia in males and vesical fascia in females.
The ﬁrst of these ligaments is known as the medial puboprostatic ligament in males and the medial pubovesical ligament in females. This ligament lies close to the pelvic ﬂoor and ﬂanks the deep dorsal vein of the penis (or clitoris) as it pierces up the pelvic ﬂoor to enter the prostatic (or vesical) venous plexus. Other ligaments ﬂanking this vein include the inferior (arcuate) pubic ligament anteriorly, which forms the inferior margin of the pubic symphysis, and the transverse perineal ligament posteriorly, which is an anterior thickening of the perineal membrane.
The second ligament is known as the lateral puboprostatic ligament in males and the lateral pubovesical ligament in females. This ligament is formed by a lateral extension of the prostatic (or, in females, vesical) fascia over the inferior group of vesical arteries, pudendal veins (draining the vesical plexus), and autonomic nerves. The terminal part of the ureter and (in males) vas deferens contribute adventitia to this ligament. At its lateral edge, this ligament joins the superior fascia of the pelvic diaphragm, which invests the levatorani. This linear area of attachment is known as the tendinous arch of the pelvic fascia. 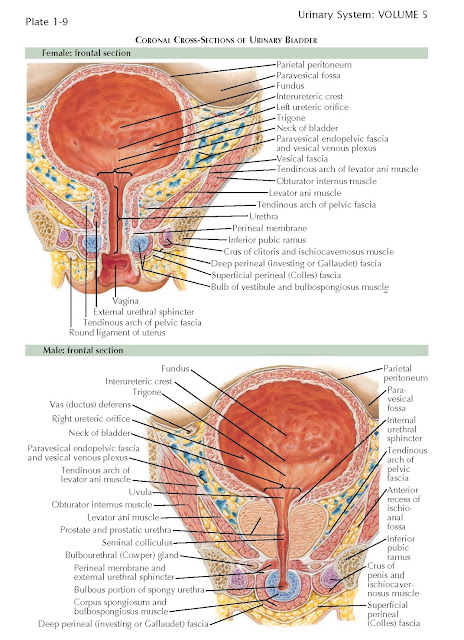 Bladder Structure
The detrusor muscle, which contracts under parasympathetic stimulation, consists of three layers of muscle. Unlike in the gastrointestinal tract, however, these muscle layers are not clearly distinct in all areas.
The outer muscle layer consists of predominantly longitudinal ﬁbers, which are especially numerous in the midline region and near the neck. The thin middle muscle layer encircles the fundus and body. In males, additional circular ﬁbers create the internal urethral sphincter in the inferior neck, which contracts during sympathetically stimulated ejaculation to prevent reﬂux of semen into the bladder.
The innermost layer of the detrusor contains additional longitudinal ﬁbers. In the region of the trigone, this layer is intimately attached to the mucosa and forms the trigonal muscle.
Around the ureteric oriﬁces, the muscular coat of each ureter also fans out into the bladder. Some of these muscle ﬁbers cross the midline to unite with strands from the opposite side, raising an interureteric crest.
The sides of the trigone are outlined by yet another group of submucosal ﬁbers, known as Bell muscle, which connect the ureteral muscles with the wall of the urethra. Tension across these bands, especially when combined with pressure from the neighboring middle lobe of the prostate (in males), leads to a small elevation above the bladder neck known as the uvula.
The innermost layer of the bladder is the mucosa. When the bladder is empty, the mucosa is corrugated by numerous folds. As the bladder distends, however, the folds are obliterated. The mucosa of the trigone is anatomically distinct, however, because it is ﬁrmly attached to the muscularis, consequenly appearing smooth even when the bladder is empty.