Blood Supply of the Abdomen


Blood Supply of the Abdomen
The aorta enters the abdomen by passing posterior to the median arcuate ligament of the diaphragm at the level of T12. Its first branches are the paired inferior phrenic arteries, which commonly originate between the diaphragmatic crura and course to the inferior aspect of the dome of the diaphragm, where they divide into anterior and posterior branches. The latter of these anastomose with the intercostal arteries, whereas the former anastomose with twigs of the inferior phrenic artery, as well as the musculophrenic, pericardiacophrenic, and internal thoracic arteries. Communications also exist, through the coronary ligament and bare area of the liver, with the hepatic arterial system. The size and origin of the inferior phrenic arteries vary greatly. Their caliber ranges from 1 to 4 mm. They may exit bilaterally (60%) from either the aorta or celiac artery, or one from the former and the other from the latter. They may emerge as a common trunk (40%), either from the aorta (20%), from the celiac artery (18%), or from the left gastric artery (2%), before branching into left and right inferior phrenic arteries. 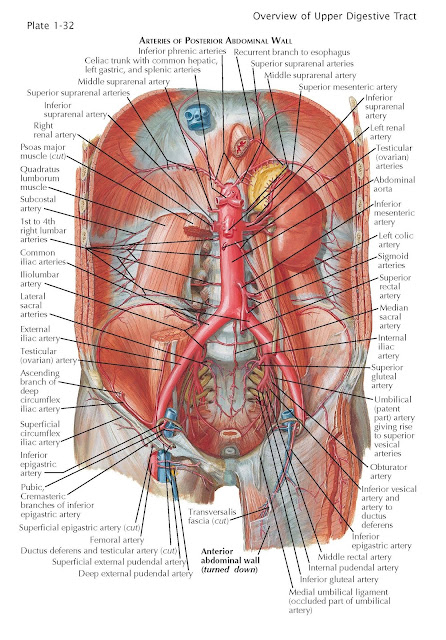 From the posterior surface of the aorta, opposite the four upper lumbar vertebral bodies, arise four lumbar arteries, either via a common trunk or separately on each side. Because the aorta ends at the L4 level, a fifth pair of lumbar arteries frequently originate from the middle sacral or internal iliac arteries. The lumbar arteries curve around the vertebral bodies and pass posterior to the sympathetic trunk, psoas major, and quadratus lumborum muscles, except for the fourth lumbar segmental artery, which often traverses anterior to the latter. The right lumbar arteries travel posterior to the inferior vena cava, and L1 and L2 arteries run posterior to the cisterna chyli. Each lumbar artery gives off a long posterior branch, which, via medial, lateral, and spinal rami, supplies the skin and muscles of the back, the spinal ligaments, and the spinal cord. Leaving the lateral border of the quadratus lumborum muscle, the lumbar arteries continue between the transversus abdominis and internal abdominal oblique muscle layers. As they travel toward the rectus abdominis muscle, they release lateral cutaneous and anterior cutaneous branches and anastomose with the lower intercostal, iliolumbar, and superior and inferior epigastric arteries and the ascending branch of the deep circumflex iliac artery.
The lumbar arteries participate in an arterial circle formed by adipose capsular branches from the renal, suprarenal, and gonadal arteries.
The unpaired, visceral branches from the abdominal aorta that feed the foregut, midgut, and hindgut are the celiac, superior mesenteric, and inferior mesenteric arteries, respectively. The renal arteries exit the aorta at the level of L1 or between L1 and L2 and supply the kidneys, suprarenal glands, and proximal ureters. The gonadal (testicular or ovarian) vessels exit the anterior surface of the aorta inferior to the renal arteries at a level varying from L1 to L3, but they may occasionally arise from a suprarenal, phrenic, superior mesenteric, lumbar, common iliac, or internal iliac artery. They may appear as a duplicated artery (17%) on one side or, less frequently, on both sides. An important abnormality concerns an arched gonadal artery (arched testicular artery of Luschka), which originates from the aorta posterior and inferior to the renal vein but ascends to curve superiorly and descends anterior to the renal vein. The aorta divides at the level of the lower third of the L4 vertebra into the approximately 6 mm–wide common iliac arteries, the lengths of which vary from 1 to 9 cm. Up to the point at which they divide into external and internal iliac arteries, the common iliac arteries have no branches, except for small, unnamed branches to the peritoneum and subperitoneal tissue.
The superior epigastric and musculophrenic arteries (both terminal branches of the internal thoracic artery) supply the anterolateral wall superiorly. The latter vessels travel inferiorly in a space posterior to the lower costal cartilages and send branches to the seventh to ninth intercostal spaces, the lower pericardium, and the superior region of the abdominal muscles. Terminating at the 10th and 11th intercostal spaces, they anastomose with the intercostal and subcostal arteries, with additional small connections to the lumbar and deep circumflex iliac arteries. A branch piercing the diaphragm communicates with the anterior ramus of the inferior phrenic artery. The superior epigastric artery, entering the rectus sheath posterior to the seventh costal cartilage and descending posterior to the rectus abdominis muscle, ramifies to supply this muscle and gives off a number of small cutaneous branches. It anastomoses with the inferior epigastric artery. 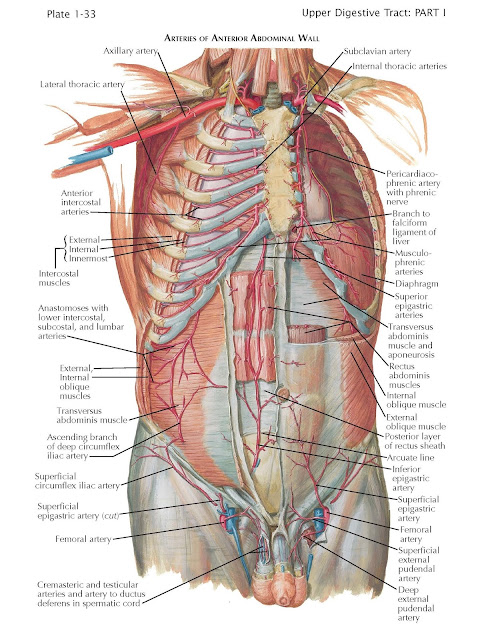 The main vessels that feed the inferior abdominal wall are the inferior epigastric and deep circumflex iliac arteries. Both arise from the external iliac artery, the former on its medial side and the latter on its lateral side just superior to the inguinal ligament. The inferior epigastric artery runs superiorly toward the umbilicus, supplying blood to the nearby peritoneum, transversalis fascia, and rectus sheath. It has several branches that supply the abdominal muscles and overlying subcutaneous tissue and skin. Typically it anastomoses heavily with the superior epigastric and lower intercostal arteries. Shortly after its origin, the inferior epigastric artery releases the cremasteric artery and a small pubic artery. The latter artery anastomoses with a branch of the obturator artery to supply structures on the posterior aspect of the pubic bone. The cremasteric artery accompanies the spermatic cord to supply the cremasteric muscle and fascia, ultimately anastomosing with the testicular artery. In the female, this artery accompanies the round ligament.
The deep circumflex iliac artery courses in a sheath formed by the union of the transversalis and iliac fasciae (or between the latter and the peritoneum) laterally and superiorly toward the anterior superior iliac spine. After piercing the transversalis fascia along the inner lip of the iliac crest, it continues to the crest’s midpoint and passes through the transverse abdominal muscle to pursue a posterior course between this and the internal abdominal oblique muscle. An ascending branch, leaving the main artery near the anterior superior iliac spine, anastomoses with the subcostal, lumbar, and lower intercostal arteries; other branches communicate with the superficial circumflex iliac, inferior epigastric, iliolumbar, and superior gluteal arteries.
The final three arteries that supply blood to the abdominal wall are branches of the femoral artery. The superficial epigastric artery passes superiorly across the inguinal ligament and courses toward the umbilicus, supplying the superficial inguinal lymph nodes as well as the skin and the subcutaneous tissue of the medial, lower abdomen. The superficial circumflex iliac artery courses anterior to and parallel with the inguinal ligament (after piercing the fascia lata), providing blood to the upper thigh and lateral side of the abdomen. The external pudendal artery emerges through the fossa ovalis and travels medially across the spermatic cord or round ligament to supply the skin and subcutaneous tissue in the suprapubic region. One branch ana tomoses with the dorsal artery of the penis or clitoris.