Venous Drainage of the Abdomen


Venous Drainage of the Abdomen
The main collecting vessels of the abdomen are the inferior vena cava and the hepatic portal vein. The hepatic portal vein drains to the liver and it originates from smaller veins that drain the alimentary tract, its associated glands, and the spleen. Here we will focus on the inferior vena cava and its tributaries, starting with the superficial veins that drain the anterolateral abdominal wall. Please note that these veins accompany the arteries of the same name, mostly in duplicate (venae comitantes) on both sides of the artery, being enwrapped in the same sheath.


The external pudendal vein, aside from branches originating from the region above the symphysis pubis, receives the venous blood from the external genitalia (superficial dorsal vein of the penis or clitoris and the sub- cutaneous veins of the scrotum or labia majora), and joins, in many instances, the great saphenous vein or the femoral vein. The superficial epigastric and superficial circumflex iliac veins, draining the medial and lateral parts of the lower abdominal wall, respectively, pass superficial to the inguinal ligament and, piercing the cribriform fascia, enter the femoral vein (in other instances, the great saphenous vein). In the body’s midaxillary line the superficial veins of the upper and lower halves of the trunk communicate through the thoracoepigastric veins, which unite in the axilla with the lateral thoracic veins, each a branch of an axillary vein. This system of anastomosis plays an important role in the event of an obstruction of the superior or inferior vena cava. The thoracoepigastric veins receive numerous tributaries from the surrounding superficial fascia as well as veins emerging from the lateral aspect of the mammary gland. 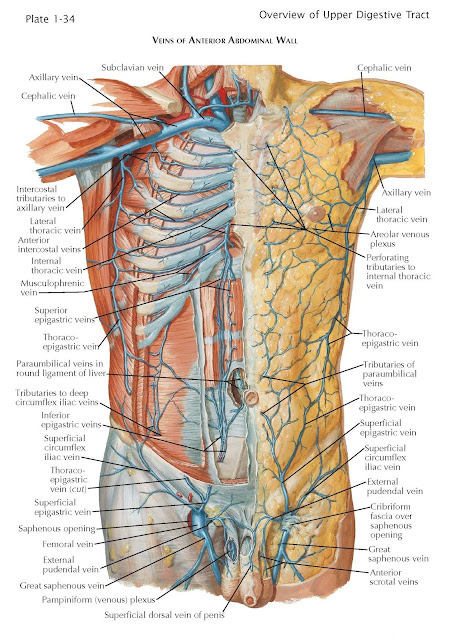 Another collateral venous circulation of clinical significance comes about through the superficial supraumbilical and infraumbilical veins, which, by means of five or six paraumbilical veins arising from the integument and the musculoaponeurotic structures or the abdominal wall, course within the ligamentum teres and enter the left branch of the portal vein. When portal venous pressure rises in liver cirrhosis, the paraumbilical veins establish collaterals with the superior and inferior epigastric and thoracoepigastric veins, and become enlarged and tortuous, assuming a radial pattern known as the caput medusae (head of Medusa).
The two deeper veins that drain the anterolateral abdominal wall are the inferior epigastric and deep circumflex iliac veins, both of which enter the external iliac vein (the continuation of the femoral vein) after having drained the same regions supplied by the corresponding arteries. This network of anastomoses, including the musculophrenic and superior epigastric veins, likewise conforms to the location of the arteries. The external iliac vein, beginning posterior to the inguinal ligaments, courses with its homonymous artery superiorly along the brim of the lesser pelvis to unite with the internal iliac vein anterior to the sacroiliac joint to form the common iliac vein.
The internal iliac vein collects the blood from all pelvic structures, except the upper part of the rectum and the sigmoid colon, which drain to the portal system via the inferior mesenteric vein, and the ovaries and testes, which reach the inferior vena cava directly via the gonadal veins. Starting near the superior part of the greater sciatic foramen and ascending over the piriform and psoas major muscles, the internal iliac vein receives the superior and inferior gluteal, internal pudendal, obturator, lateral sacral, middle rectal, and superior vesical veins.
Many of these vessels have their origins in a rich venous plexus, such as the pudendal, urethrovesical, and uterovaginal plexuses.
The common iliac veins continue along the course of the external iliac veins in a median direction until the left vein meets the right vein, marking the starting point of the inferior vena cava. The left common iliac vein, often somewhat longer than its right counterpart, receives the middle sacral vein when this unpaired vessel does not enter (as it does frequently) the angle of the two iliac veins. Both common iliac veins receive the iliolumbar veins and, in some instances, the lateral sacral veins, if the latter have not entered the internal iliac vein or have not joined the fifth lumbar vein.
The inferior vena cava commences at the right of L5, ascends along the aorta anterior to the vertebral column, and continues posterior to the liver in a groove between the bare area and the caudal lobe. Immediately after the inferior vena cava receives the three hepatic veins (draining the liver), the inferior vena cava leaves the abdomen through the diaphragm’s caval hiatus in the central tendon. Because the caval hiatus lies superior to the aortic hiatus and the union of the two common iliac veins is inferior to the aortic bifurcation, the inferior vena cava in the abdomen is about 7 to 8 cm longer than the abdominal aorta. The first veins to enter the inferior vena cava are the lumbar veins. The lowest (fifth) lumbar vein empties to the iliolumbar vein, whereas the upper four lumbar veins, lying on the bodies of the vertebrae and accompanying the arteries, drain into the posterior wall of the inferior vena cava but may drain to the azygos or hemiazygos veins. The connections that the lumbar veins make with the renal, suprarenal, gonadal, deep circumflex, iliac, and other abdominal veins are manifold. The most important concerns the longitudinal anastomosis effected through the ascending lumbar veins. These veins, beginning in the pelvis as a continuation of the lateral sacral veins, ascend deep in the sulcus between the tendinous origins of the psoas major muscle and the bodies and transverse processes  of  the  vertebrae;  after  receiving  branches from the lumbar veins, the right ascending lumbar vein drains into the azygos and the left into the hemiazygos, or sometimes into the left renal vein. Posteriorly, the ascending lumbar veins make numerous connections with the valveless veins of the vertebral venous system and thus bring the caval system into relationship with the veins of the spine, spinal cord, dura mater, vertebrae, and brain. These relationships provide an explanation for the spread of infections, tumors, and thrombi from the pelvis, abdomen, or thorax into the central nervous system, or bones of the skull and spine. 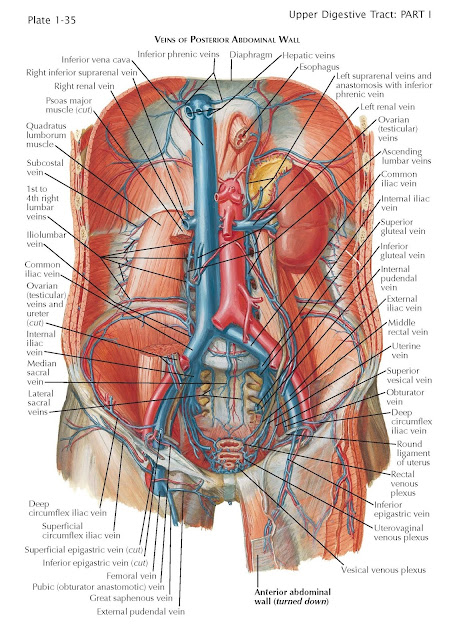 The right gonadal (testicular or ovarian) vein enters the inferior vena cava superior to the lumbar veins, whereas the left gonadal vein usually merges with the left renal vein, or possibly the suprarenal vein, or one of the lumbar veins. The testicular veins, starting from the pampiniform plexus in the spermatic cord, ascend along the ductus deferens, pass through the inguinal canal, and, following the artery, course superiorly on the psoas major muscle. The ovarian veins, derived from the uterovaginal and ovarian plexuses, take a similar course. The large renal veins lie anterior to the corresponding arteries and show much less variation than the renal arteries. The right renal vein rarely receives tributaries, whereas on the left side, supernumerary veins such as the left gonadal and suprarenal veins typically join the vessel. The right suprarenal vein usually terminates with a direct connection with the inferior vena cava and, occasionally, right renal vein. The left suprarenal vein typically drains into the left renal or inferior phrenic vein.
Superior to the hepatic veins are the uppermost tributaries of the inferior vena cava, the inferior phrenic veins, which generally follow the course of the homonymous arteries. The left one may join the left renal vein separately or via a common trunk with the left suprarenal vein (5%).