Lymph Drainage of the Abdomen


Lymph Drainage of the Abdomen
The major lymphatic channels of the posterior abdominal wall are essentially located along the large blood vessels. Thus the external iliac lymph vessels, interrupted by nodes of the same name, course with the external iliac arteries and veins. Entering the pelvis posterior to the inguinal ligament about midway between the anterior superior spine of the ilium and symphysis pubis, these vessels receive lymph from the deep (and thereby also superficial) inguinal lymph nodes, through which pass the lymphatic drainage of the lower extremities, the inferior parts of the anterolateral abdominal wall, and the perineum (including the external genitalia and anal region). The internal iliac lymph vessels run, interrupted by the internal iliac nodes, with the artery and vein of the same name and drain the larger part of the organs and wall of the true pelvis, whereas the remaining part of this region releases lymph through the presacral lymphatics. The external and internal iliac lymphatics join to form common iliac lymph vessels and nodes of the same name. Common iliac lymph vessels also receive input from the presacral lymphatics with their lateral and middle sacral nodes. The latter are situated in the retro- rectal connective tissue over the anterior surface of the sacrum. In the region of the aortic bifurcation, the common iliac lymph vessels proceed superiorly along the lateral walls of the aorta to become the right and left lumbar trunks. These trunks and the interposed lateral aortic lymph nodes receive afferents from the kidney and the visceral (preaortic) lymph nodes. The extremely large area of drainage that the lumbar trunks serve includes, thus, the walls and organs of the lower abdomen as well as of the lower extremities. 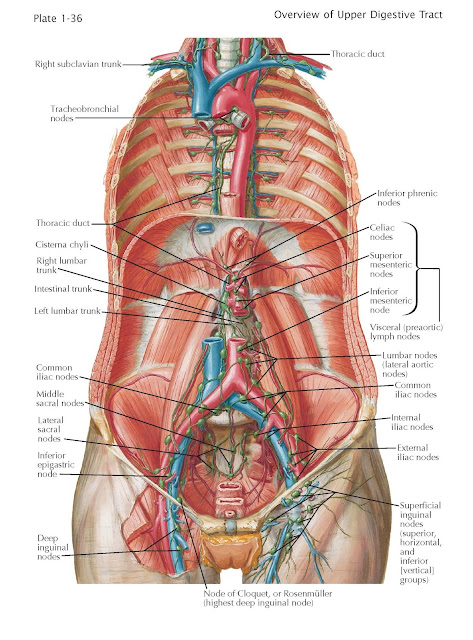 Both lumbar trunks unite in the region of the aortic hiatus, anterior to the vertebral column (in the majority of cases), at the level of the upper third of L1 and the intervertebral disc between vertebrae T12 and L1, to form the beginning of the thoracic duct. In about 50% of individuals, the thoracic duct starts with a distinctive, elongated, saccular dilatation (≈ 1 to 1.5 cm in diameter and 5 to 7 cm in length), the cisterna chyli. Its three main roots are the single intestinal trunk and the two lumbar trunks; however, two smaller tributaries coming from a cranial direction and descending through the aortic hiatus of the diaphragm also join the cisterna chyli.

The thoracic duct passes first to the right across the posterior surface of the aorta, through the aortic hiatus of the diaphragm into the mediastinum, ascending between the aorta and the azygos vein, anterior to the lower thoracic vertebrae and right intercostal arteries. On reaching the level of the fifth thoracic vertebra, it courses posterior to the esophagus to the left side of the spinal column, where it runs for a short distance to the right of the aorta and then crosses posterior to the aortic arch to continue its ascent. Opposite the third thoracic vertebra, the thoracic duct draws away from the spinal column in an anterior direction and proceeds between the left common carotid artery and the left subclavian artery, through the superior thoracic aperture, and into the left supraclavicular fossa. Here it arches superior to the subclavian artery and opens either into the angle at which the left jugular and left subclavian veins join to form the left brachiocephalic vein or, less often, into one of the two veins forming this angle. At its point of entry into the veins, the thoracic duct does not always form a single entity but sometimes divides into a triangular structure composed of two or more branches. During its passage through the thorax, the thoracic duct is joined by vessels connecting with the posterior parietal, tracheobronchial, and posterior mediastinal lymph nodes, as well as smaller lymph vessels draining the thoracic wall and thoracic organs.