Overview of the Digestive System


Overview of the Digestive System
The digestive system is by far the largest and most complex of the internal organ systems. The interplay of its multiple organs, its intrinsic hormonal and neural systems, and its intricate and interacting physiologic functions are among the most fascinating aspects of human physiology. Although the primary function of each organ is to interact effectively with other organs to provide nutrition to the rest of the body, several organs also have distinct metabolic functions that are of vital importance.


Appreciating the role of each organ begins with asking how the four essential functions of each are regulated and how immune and other defense mechanisms are protecting that organ. The wall of each luminal organ is composed of three layers of distinctly functioning muscle groups responsible for moving nutrients and fluids from the mouth until they are discharged from the anus. The electromechanical coupling mechanisms responsible for motility by which this occurs are surprisingly distinct for each organ. An electrical syncytium regulates these contractions with rhythmic depolarizations called slow waves and contractioninducing depolarizations resulting in action potentials. Action potentials are similar throughout the luminal organs, but slow wave activities in the stomach, duodenum, and colon vary in frequency. 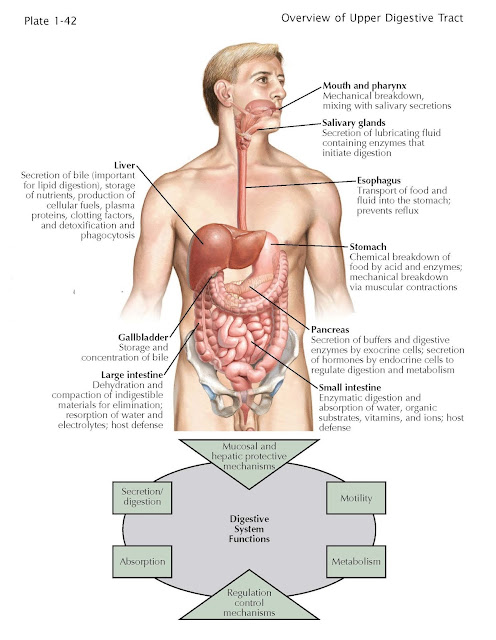 All luminal and solid gastrointestinal organs are involved with secretions that facilitate digestion and mucosal protection, leading to nutrient absorption. In contrast, the esophagus has the least secretion and no absorption and the liver and pancreas are involved with secretion only and not motility or absorption.
The liver is the most important and largest metabolic organ. Metabolic functions are also provided by proteins synthesized by the small bowel and by hormones secreted by the stomach, pancreas, and small bowel.
Regulation of each organ is achieved with a complex interaction between the extrinsic autonomic nervous system, intrinsic or enteric nervous system, and hormones secreted both within and outside the digestive system. The hormones of the digestive system were the first endocrine substances to be discovered. The small intestine is clearly the largest of all endocrine organs. Each of the neurotransmitters identified in the enteric nervous system of the digestive system is also found in the brain. Again, many were first discovered in the gut. The lumen of each of the digestive organs is filled with potentially lethal chemicals and microorganisms. Distinct, organ-specific, highly effective defense mechanisms exist in each organ to prevent disease. The gut’s microbiome develops shortly after birth and grows to a point of containing 10 trillion organisms, or nearly 10 times as many cells as the rest of the body! Other important defense mechanisms with unique actions in each organ include motility, intrinsic secretion, lubrication with fluid and mucus, and frequent cell turnover.
When these protective systems break down or become impaired, disease begins. Disorders of the digestive tract are the second most common reason, after upper respiratory tract disorders, that patients seek help from a primary care physician or are absent from work or school. In a typical year, approximately 60% of individuals experience some digestive system dysfunction, whether acute or chronic. Common digestive disorders affecting 15% to 20% of the U.S. population include functional bowel disturbances, gastroesophageal reflux disease, peptic ulcer disease, hepatitis, gallbladder stones, and infectious diseases of the stomach and intestines. These and other gastrointestinal disorders account for 25% of all hospitalizations. Of all primary neoplasms leading to death, one third originate in digestive system organs. Cancers of the digestive system continue to be the most common cause of all cancer deaths. Lung cancer is overall the most common type of cancer, but cancers of the colon, pancreas, liver, stomach, and esophagus are among the 10 commonest cancers.
One of the most fascinating aspects of the pathophysiology of the digestive system is the marked difference in the prevalence of disorders in men and women. Eosinophilic esophagitis, esophageal adenocarcinoma, and hepatocellular carcinoma are much more common in men, and irritable bowel syndrome and gallstone disease are much more common in women.