The five lumbar vertebrae present the parts described for a typical vertebral body (centrum) and vertebral (neural) arch, supporting the two transverse processes, the spinous process, and the superior and inferior articular processes. 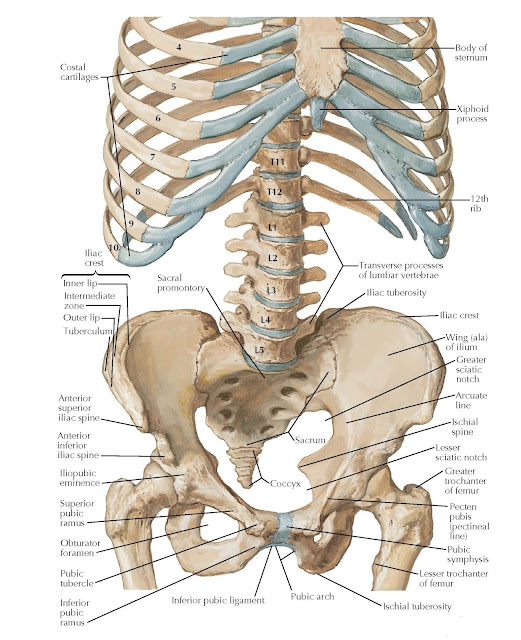 The bony pelvis is made up of the two hip bones, with the sacrum and coccyx wedged between them posteriorly. For descriptive purposes, the bony pelvis is divided by a plane passing through the sacral promontory and the crest of the pubis, into the major (false) pelvis above the plane and the minor (true) pelvis below this plane. This plane lies roughly in the inlet of the true pelvis, which is bounded by the sacral promontory, crest of the pubis, anterior margin of the ala of the sacrum, the arcuate line of the ilium, and the pecten pubis, all of which could be considered as forming the linea terminalis.

The hip bone (os coxae or innominate bone) is made up of the ilium, pubis, and ischium, which are separate bones in the young subject but fuse at the acetabulum in the adult. On the inner surface of the ilium, the arcuate line indicates the inferior border of the ala of the ilium, which ends superiorly in the palpable iliac crest, stretching from the anterior superior spine of the ilium to the posterior superior iliac spine. The crest also presents an external (lateral) lip, an internal (medial) lip, and an intermediate line and thickening on its lateral aspect a short distance posterior to the anterior superior spine, which is called the tubercle of the crest. The body of the pubis joins the pubic bone on the other side, by means of a fibrocartilaginous lamina, the symphysis pubis. The upper border of the body, which is thick, roughened, and turned anteroinferiorly, is called the crest, and at its lateral end is a prominence named the pubic tubercle. The superior ramus of the pubis, coursing superiorly and posterolaterally, enters into the formation of the acetabulum (acetabular portion, sometimes called the body) and presents a prominent pecten pubis, or pectineal line, which is continuous with the arcuate line of the ilium. The inferior ramus courses interiorly and posterolaterally, to join the ramus of the ischium and complete the margins of the obturator foramen. The main portion of the ischium extends interiorly and posteriorly from the acetabulum, to expand into the ischialtuberosity, which projects posteroinferiorly. From the posterior border of the inner side of the lower part of the acetabular portion of the ischium, the ischial spine projects posteromedially between the greater and lesser sciatic notches. A ramus of the ischium courses anteriorly from the lower end of the main portion of the bone, to become continuous with the inferior ramus of the pubis, forming what is often referred to as the ischiopubic ramus.