Regions of the Abdomen


Regions of the Abdomen
For the sake of convenience, the abdomen is traditionally divided into either four or nine regions. Of these two (somewhat artificial) divisions, the more simple one uses two imaginary planes, one passing vertically and the other horizontally through the umbilicus, dividing the abdomen into four quadrants, the right upper, left upper, right lower, and left lower quadrants.


A division of the abdomen into nine smaller areas is accomplished by the use of two vertical and two horizontal planes. The zone above the upper of the two horizontal planes is divided by the two vertical planes into a centrally placed epigastric region (epigastrium), with a right and left hypochondriac region on each side of it. The zone between the two horizontal planes is divided into a centrally placed umbilical region, with a left and right lumbar region on each side. The zone below the lower of the two horizontal planes has a centrally placed hypogastric region and a right and left inguinal region.
Different resources list different landmarks as the basis for drawing the lines of the nine-region scheme. The upper horizontal (superior transverse) line, or plane, may be drawn halfway between the superior border of the sternum and the superior border of the symphysis pubis. This plane has been considered as passing through the pylorus and has thus been called the transpyloric plane, which also has been described as being halfway between the xiphisternal junction and the umbilicus, and passing through the tip of the ninth costal cartilage, the fundus of the gallbladder, and the lower part of the body of the first lumbar vertebra. Another way of locating the upper horizontal plane is at the most inferior part of the costal margin (usually the most caudal part of the 10th costal cartilage). This plane is called the subcostal plane. 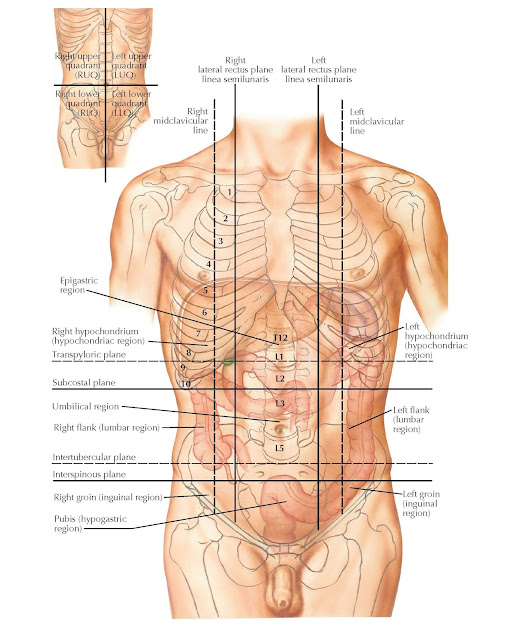 The lower horizontal (inferior transverse) line, or plane, may be assigned to the levels of the tubercles of the iliac crests and is called the transtubercular plane; it usually passes through the lower part of the fifth lumbar vertebra, or it may be located at the level of the anterior superior spine of the ilium and called the interspinous plane. It has also been located at the highest points of the iliac crests and called the supracristal plane.
The two vertical planes, or lines, one on each side, may be located halfway between the median plane and the anterior superior spine of the ilium (or halfway between the pubic tubercle and the anterior superior spine of the ilium or the midpoint of the inguinal ligament; right and left midinguinal planes). The other common way of locating the vertical plane on each side uses the lateral border of the rectus abdominis muscle or the semilunar line, which, if followed inferiorly and medially toward the pubic tubercle, brings the entire inguinal canal into the inguinal region.
In attempting to use either quadrants or the smaller- sized nine regions in the localization of viscera, one finds that a substantial number of individual organs are not confined to any one region. Attention should be called to the fact that, because the diaphragm is the upper limit of the abdomen, most of the hypochondriac (as the name indicates) regions and parts of the epigastric region are under cover of the ribs. Because these three regions make up a good portion of the right and left upper quadrants, these quadrants also extend well up under the ribs.