Brain-Gut Interactions And Visceral Reflexes
The similarities in neurotransmitters in the gut and CNS further stimulated our understanding of the interactions of the brain and gut. Since the time of Pavlov and Komarov and their colleagues, reflexes between the brain and gut and within the gut have been shown to control much of normal physiology and pathophysiology. Visceral reflexes explain a number of clinical signs, many of which are controlled by complex interactions mediated by spinal or CNS pathways. Such vagal or sympathetic reflexes initiate patterned behaviors that often involve multiple organs. Such reflexive responses stimulated by extrinsic neurons are then mediated locally by enteric neural pathways or intrinsic hormones. 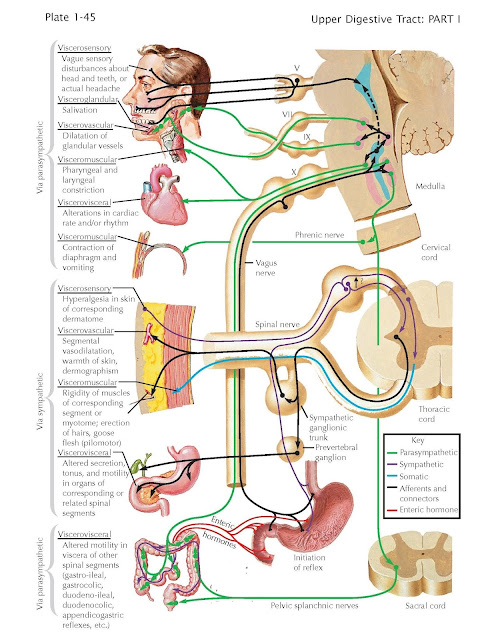 One of the most important and well-studied brain-gut reflexes is the one associated with the control of gastric and pancreatic secretion. Sights, smells, sounds, and even the anticipation of food serve as external cues that can stimulate vagally mediated reflexes. Perhaps the best known is the reflexive increase in acid secretion that prepares the stomach to begin digestion. These reflexes are both instinctive and learned. Although it is initiated as an autonomic nervous system vagal reflex, the release of acid is ultimately mediated by complex interactions of histamine released from enteroendocrine cells and the systemic release of gastrin. Excess stress is known to cause gastric upset. Such stress is often attributed to “nerves” and dismissed, but it may be an important cause of disease, including peptic ulcers, as described by Cushing. For example, the incidence of perforating gastric and duodenal ulcers increased markedly in England during the bombings of World War II.
Another very important visceral reflex is the gastrocolic reflex. This normal physiologic response of post-prandial emptying of the colon occurs gradually as a meal is consumed and colonic contractility increases progressively over the next 30 to 60 minutes. The reflex is initiated by specific receptors in the duodenum that respond to the intake of fatty acids but not liquid alone or nonessential amino acids. Patients who suffer from irritable bowel syndrome have an exaggerated gastrocolic reflex. Colonic contractility is not only more forceful but begins sooner than normal. Spastic contractions occur shortly after a meal is ingested and often peak in intensity before the meal is complete, causing diarrhea, cramping pain, and/or bloating. In this centrally initiated reflex, local serotonergic neurons in the myenteric plexus stimulate propulsive and spastic contractions that at one time may lead to constipation and at another, diarrhea. Afferent impulses from the hypercontractile and often distended sigmoid colon initiate reflexes to the CNS (e.g., headache, a strange feeling in the head), to the bronchial tree (difficulty in breathing), to the stomach (epigastric distress, indigestion), and to the abdominal skin (intolerance of constricting garments).
The afferent limb of viscerosomatic reflexes originates from gut viscera and then affects other visceral and somatic structures; it may involve sympathetic or parasympathetic nerves. The efferent limb is usually via parasympathetic nerves. The viscerosensory reflexes result from shared afferent pathways where C fibers in the dorsal horn that are not myelinated from visceral organs comingle with somatic afferents in the dorsal horn or spinal column. They explain the phenomena of “referred pain” and of “skin hyperalgesia,” which, in the case of sympathetic reflexes, occurs in skin areas (dermatomes) innervated by the same spinal segment from which the nerve supply of the diseased viscus is derived.
Unusual and often dangerous viscerosomatic or viscerovisceral reflexes are commonly encountered. Gas-trointestinal disorders leading to vasovagal reflexes often lead to syncope in the setting of severe abdominal pain, extremes of nausea, exposure to particularly noxious substances, and severe diarrhea. In such settings, visceral “brain-gut” stimuli initiate vagally mediated hypotension, bradycardia, and diaphoresis. Swallowing syncope, a related reflex, occurs when a patient experiences an esophageal spasm, irritation, or distention that leads to vagally induced arrhythmias or bradycardia and syncope. Gastroesophageal reflux can rarely lead to a similar reflex.