Cardiovascular Reflexes
The cardiovascular system is centrally regulated by autonomic reflexes. These work with local mechanisms (see Chapter 23) and the renin–angiotension–aldsterone and antidiuretic hormone systems (see Chapter 29) to minimize fluctuations in the mean arterial blood pressure (MABP) and volume, and to maintain adequate cerebral and coronary perfusion. Intrinsic reflexes, including the baroreceptor, cardiopulmonary and chemoreceptor reflexes, respond to stimuli originating within the cardiovascular system. Less important extrinsic reflexes mediate the cardiovascular response to stimuli originating elsewhere (e.g. pain, temperature changes). Figure 27 illustrates the responses of the baroreceptor and cardiopulmonary reflexes to reduced blood pressure and volume, as would occur, for example, during haemorrhage.


Cardiovascular reflexes involve three components:
1        Afferent nerves (‘receptors’) sense a change in the state of the system, and communicate this to the brain, which
2        Processes this information and implements an appropriate response, by
3   Altering the activity of efferent nerves controlling cardiac, vascular and renal function, thereby causing homeostatic responses that reverse the change in state. 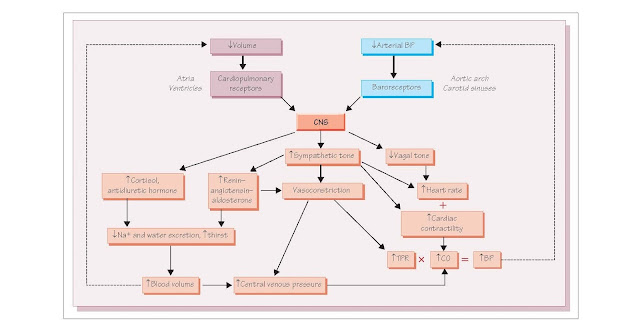 Intrinsic cardiovascular reflexes
The baroreceptor reflex
This reflex acts rapidly to minimize moment-to-moment fluctuations in the MABP. Baroreceptors are afferent (sensory) nerve endings in the walls of the carotid sinuses (thin-walled dilatations at the origins of the internal carotid arteries) and the aortic arch. These mechanoreceptors sense alterations in wall stretch caused by pressure changes, and respond by modifying the frequency at which they fire action potentials. Pressure elevations increase impulse frequency; pressure decreases have the opposite effect.
When MABP decreases, the fall in baroreceptor impulse frequency causes the brain to reduce the firing of vagal efferents supplying the sinoatrial node, thus causing tachycardia. Simultaneously, the activity of sympathetic nerves innervating the heart and most blood vessels is increased, causing increased cardiac contractility and constriction of arteries and veins. Stimulation of renal sympathetic nerves increases renin release, and consequently angiotensin II production and aldosterone secretion (see Chapter 29). The resulting tachycardia, vasoconstriction and fluid retention act together to raise MABP. Opposite effects occur when arterial blood pressure rises.
There are two types of baroreceptors. A fibres have large, myelinated axons and are activated over lower levels of pressure. C fibres have small, unmyelinated axons and respond over higher levels of pressure. Together, these provide an input to the brain which is most sensitive to pressure changes between 80 and 150 mmHg. The brain is able to reset the baroreflex to allow increases in MABP to occur (e.g. during exercise and the defence reaction). Ageing, hypertension and atherosclerosis decrease arterial wall compliance, reducing baroreceptor reflex sensitivity.
The baroreceptors quickly show partial adaptation to new pressure levels. Therefore alterations in frequency are greatest while pressure is changing, and tend to moderate when a new steady- state pressure level is established. If unable to prevent a change in MABP, the reflex will within several hours become reset to maintain pressure around the new level. This finding, together with studies by Cowley and coworkers in the 1970s showing that destroying baroreceptor function increased the variability of MABP but had little effect on its average value measured over a long time, led to general acceptance of the idea that baroreceptors have no role in long-term regulation of MABP. However, recent evidence that baroreceptor resetting is incomplete and that electrical stimulation of baroreceptors causes reductions in MABP which are sustained over many days has led some experts to re-evaluate this issue.

Cardiopulmonary Reflexes
Diverse intrinsic cardiovascular reflexes originate in the heart and lungs. Cutting the vagal afferent fibres mediating these cardiopulmonary reflexes causes an increased heart rate and vasoconstriction, especially in muscle, renal and mesenteric vascular beds. Cardiopulmonary reflexes are therefore thought to exert a net tonic depression of the heart rate and vascular tone. Receptors for these reflexes are located mainly in low-pressure regions of the cardio- vascular system, and are well placed to sense the blood volume in the central thoracic compartment. These reflexes are thought to be particularly important in controlling blood volume, as well as vascular tone, and act together with the baroreceptors to stabilize the MABP. However, these reflexes have been studied mainly in animals, and their specific individual roles in humans are incompletely understood.
Specific components of the cardiopulmonary reflexes include the following.
1      Atrial mechanoreceptors with non-myelinated vagal afferents which respond to increased atrial volume/pressure by causing bradycardia and vasodilatation.
2      Mechanoreceptors in the left ventricle and coronary arteries with mainly non-myelinated vagal afferents which respond to increased ventricular diastolic pressure and afterload by causing a vasodilatation.
3    Ventricular chemoreceptors which are stimulated by substances such as bradykinin and prostaglandins released during cardiac ischaemia. These receptors activate the coronary chemoreflex. This response, also termed the Bezold Jarisch effect, occurs after the intravenous injection of many drugs, and involves marked bradycardia and widespread vasodilatation.
4          Pulmonary mechanoreceptors, which when activated by marked lung inflation, especially if oedema is present, cause tachycardia and vasodilatation.
5        Mechanoreceptors with myelinated vagal afferents, located mainly at the juncture of the atria and great veins, which respond to increased atrial volume and pressure by causing a sympathetically mediated tachycardia (Bainbridge reflex). This reflex also helps to control blood volume; its activation decreases the secretion of antidiuretic hormone (vasopressin), cortisol and renin, causing a diuresis. Although powerful in dogs, this reflex has been difficult to demonstrate in humans.

Chemoreceptor Reflexes
Chemoreceptors activated by hypoxia, hypocapnia and acidosis are located in the aortic and carotid bodies. These are stimulated during asphyxia, hypoxia and severe hypotension. The resulting chemoreceptor reflex is mainly involved in stimulating breathing, but also has cardiovascular effects. These include sympathetic constriction of (mainly skeletal muscle) arterioles, splanchnic venoconstriction and a tachycardia resulting indirectly from the increased lung inflation. This reflex is important in maintaining blood flow to the brain at arterial pressures too low to affect baroreceptor activity.

The CNS Ischaemic Response
Brainstem hypoxia stimulates a powerful generalized peripheral vasoconstriction. This response develops during severe hypotension, helping to maintain the flow of blood to the brain during shock. It also causes the Cushing reflex, in which vasoconstriction and hypertension develop when increased cerebrospinal fluid pressure (e.g. due to a brain tumour) produces brainstem hypoxia.

Extrinsic Reflexes
Stimuli that are external to the cardiovascular system also exert effects on the heart and vasculature via extrinsic reflexes. Moderate pain causes tachycardia and increases MABP; however, severe pain has the opposite effects. Cold causes cutaneous and coronary vasoconstriction, possibly precipitating angina in susceptible individuals.

Central Regulation Of Cardiovascular Reflexes
The afferent nerves carrying impulses from cardiovascular receptors terminate in the nucleus tractus solitarius (NTS) of the medulla. Neurones from the NTS project to areas of the brainstem that control both parasympathetic and sympathetic outflow, influencing their level of activation. The nucleus ambiguus and dorsal motor nucleus contain the cell bodies of the preganglionic vagal parasympathetic neurones, which slow the heart when the cardiovascular receptors report an increased blood pressure to the NTS. Neurones from the NTS also project to areas of ventrolateral medulla; from these descend bulbospinal fibres which influence the firing of the sympathetic preganglionic neurons in the intermediolateral (IML) columns of the spinal cord.
These neural circuits are capable of mediating the basic cardiovascular reflexes. However, the NTS, the other brainstem centres and the IML neurones receive descending inputs from the hypothalamus, which in turn is influenced by impulses from the limbic system of the cerebral cortex. Input from these higher centres modifies the activity of the brainstem centres, allowing the generation of integrated responses in which the functions of the cardio- vascular system and other organs are coordinated in such a way that the appropriate responses to changing conditions can be orchestrated.