EPHELIDES AND LENTIGINES
Ephelides, also known as freckles, are common benign findings. They typically manifest in childhood in fair-skinned individuals, especially those with red or blonde hair color. Ephelides tend to be passed down from generation to generation in an autosomal dominant inheritance pattern.


Lentigines are sun-induced proliferations of melanocytes. They tend to occur in older people, but they may be seen in individuals at a young age after repetitive sun exposure. They can be almost impossible to differentiate from ephelides. Solar lentigines have many synonyms, including sun spots, liver spots, and lentigo senilis. 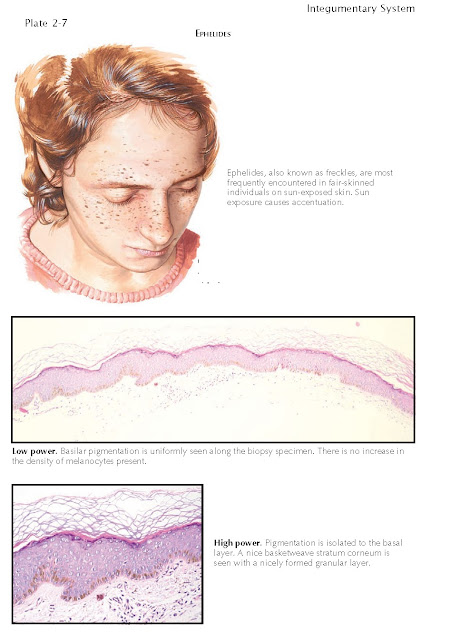 Clinical Findings: Ephelides occur at a very young age and tend to show an autosomal dominant inheritance pattern. They are accentuated in sun-exposed regions, particularly the head, neck, and forearms. Exposure to the sun or other ultraviolet source causes the ephelides to become darker and clinically more noticeable. They do not occur within the oral mucosa. They are usually uniform in coloration but can have many different sizes and shapes. Some are round or oval; others are angulated or have a bizarre shape. Their color is usually a uniform light to dark brown; they are never black. They have no malignant potential. Patients with multiple ephelides may have a higher risk for skin cancer, because their presence may be an indication of increased exposure to ultraviolet radiation. The differential diagnosis is usually very narrow and includes lentigines and common acquired nevi. The clinical location, age at onset, family history, and skin type usually make the diagnosis straightforward. The difficulty can occur when trying to differentiate a solitary lentigo from an ephelide in an adult patient.
Solar lentigines most often arise in the adult population and are distributed evenly among males and females. They can occur in anyone but are much more common in light-skinned persons. The number of lentigines typically increases with the age of the patient. Lentigines are induced by ultraviolet radiation, the most common source being chronic sun exposure. Lentigines tend to get darker with ultraviolet light exposure and lighten over time when removed from the expo- sure. Unlike ephelides, they never completely fade away. They are clinically highly uniform in color and size within an individual patient. They can be small (1-5 mm), but some are much larger (2-3 cm in diameter). They are most commonly located in sun-exposed areas but in some syndromes can be located anywhere on the human body, including the mucosal regions. Over time, some lentigines merge together to form rather large lentigines.
There are some important variants of lentigines. Lentigo simplex and the ink spot lentigo are two very common versions. Lentigo simplex is believed to occur at any age and to have no or minimal relationship to sun exposure. The lesions are found anywhere on the body. Ink spot lentigines are variants of lentigo simplex that are differentiated by their characteristic dark brown to almost black coloration. Under dermatoscopic evaluation, they have a characteristic uniform pigment network, with accentuation of pigment in the rete ridge regions. They are so named because they have the appearance of a tiny drop of dark ink dropped on the skin. Neither of these two forms of lentigines has malignant potential.
One of the more important and unique variants of lentigines are the psoralen + ultraviolet A light (PUVA) lentigines. PUVA lentigines are iatrogenic in nature and occur after medical therapy with PUVA treatment. Patients who have undergone long-term therapy with PUVA have a high risk of developing PUVA lentigines. These lentigines are darkly pigmented macules that occur across the entire body except in the areas that were not exposed to the PUVA therapy. More than half of patients who have undergone prolonged PUVA treatment will develop PUVA lentigines. They are more common in patients with fair skin types and rarely occur in darker-skinned individuals. The lentigines induced by PUVA therapy are permanent and can have disastrous cosmetic consequences. Like all patients undergoing ultraviolet phototherapy, these patients must be routinely monitored for their entire lives, because they are at increased risk for melanoma and non-melanoma skin cancer due to their chronic use of PUVA treatment.
Patients with Peutz-Jeghers syndrome have clinical findings of multiple lentigines of the oral mucosa and lips and of the hands. These patients are at increased risk for gastrointestinal carcinomas, particularly colon cancer. Peutz-Jeghers syndrome is inherited in an autosomal dominant fashion and is caused by a defect in the STK11/LKB1 tumor suppressor gene.
LEOPARD syndrome is another of the well-described genetic syndromes associated with lentigines. This syndrome is composed of lentigines, electrocardiographic abnormalities, ocular hypertelorism, pulmonary stenosis, abnormal genitalia, retardation of growth, and deafness. It is caused by a genetic mutation in PTPN11, which encodes a tyrosine phosphatase protein. 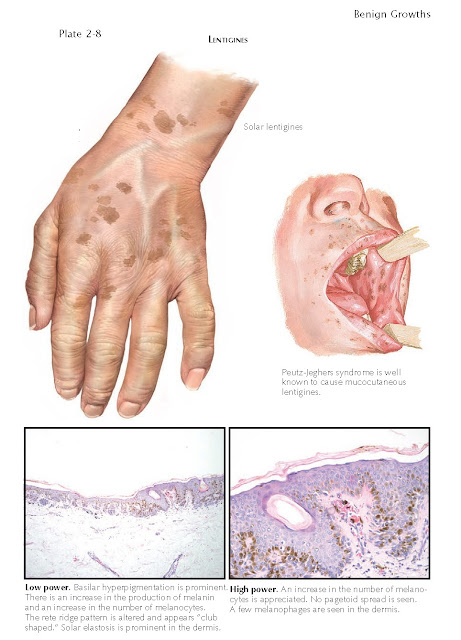 Histology: Histopathological evaluation is one method to differentiate a lentigo from an ephelide. This is rarely done. The most common use of histology is to differentiate the benign lentigo from its malignant counterpart, lentigo maligna (melanoma in situ).
On histopathologic evaluation, ephelides show no change in the epidermis. There is no increase in the number of melanocytes. The only finding is an increase in the amount of melanin and an increased rate of transfer of melanosomes from melanocytes to keratinocytes.
Lentigines, on the other hand, show an increased number of melanocytes within the area of involvement. The hyperpigmentation is obvious along the club-like configuration of the rete ridges. The increase in the number of melanocytes is not associated with any nesting of those melanocytes, as is seen in melanocytic nevi. In solar lentigines, the dermis often shows signs of chronic sun damage, with a thinning of the dermis and solar elastosis. The epidermis is also thinned in some cases.
Lentigo maligna shows many more melanocytes, some large and bizarre appearing. There is pagetoid spread of the melanocytes and an asymmetry to the lesion. Lentigo simplex has also been shown to lack defects in the BRAF gene, in contrast to melanoma, and this may be one way to differentiate the two.

Pathogenesis: Ephelides are thought to be genetically inherited, most likely in a dominant pattern. They become more prominent with sun exposure and fade during times with less exposure to ultraviolet radiation. The increase in pigment is caused by an increase in the production of melanin and an increase in the transfer of melanosomes from melanocytes to keratinocytes. There is no increase in the number of melanocytes in ephelides. The exact reason for this has not been determined.
Lentigines are caused by an increased proliferation of melanocytes locally within the skin. The cause of this proliferation is most likely ultraviolet light in the case of solar lentigines. In the case of lentigo simplex, the cause is unknown. The increased number of melanocytes ultimately leads to an increase in the amount of melanin produced, resulting in the overlying hyperpigmentation.
The cause of lentigines in some of the genetic disorders is probably the underlying genetic defect.  The exact mechanism of how the various gene defects lead to an increase in lentigines is under investigation. A better understanding of how lentigines form in certain genetic syndromes may lead to discovery of the true pathogenesis of solar lentigines and lentigo simplex.

Treatment: No therapy is needed other than to recommend sun protection, sunscreen use, and routine skin examinations in the future. For cosmetic reasons, lentigines can be removed in a myriad of ways. Light cryotherapy is effective and easy to perform. This treatment can leave hypopigmented areas and should be used with caution in darker-skinned individuals. Many different chemical peels and dermabrasion techniques have been used to help decrease the appearance of lentigines. With the proliferation of medical laser devices in dermatology, lasers with unique wavelengths have been developed to target the melanin in lentigines. These laser devices have show promise in lightening and removing solar lentigines.