EPIDERMAL NEVUS
Epidermal nevi are benign epidermal hamartomatous growths that most commonly occur as small plaques but can be widespread and can have associated systemic findings. Epidermal nevi have a tendency to follow the embryologic lines of Blaschko. The lines of Blaschko are well defined and follow a whorl-like pattern. The reason why these lesions follow Blashko’s lines is not fully understood, but it is probably caused by an interruption of normal epidermal migration during embryogenesis. 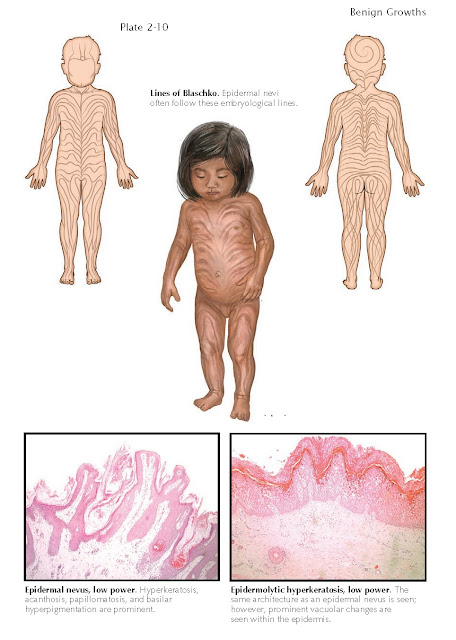 Clinical Findings: The epidermal nevus typically manifests in childhood as a solitary linear plaque. Epidermal nevi do not have a race predilection, and they can be found equally in males and females. This type of nevus is not melanocytic in nature; rather, it is composed of a proliferation of keratinocytes. The nevus initially has a smooth surface and develops a mamillated or verrucal surface over time. Epidermal nevi appear to occur most commonly on the head and neck region but can occur anywhere. After puberty, the lesions do not change dramatically. Most are flesh colored to slightly hyperpigmented. If found on the scalp, an epidermal nevus can mimic a nevus sebaceus and can be associated with hair loss, but more commonly it does not cause alopecia.
The epidermal nevus is usually small and slightly linear. Some are large, encompassing the entire length of an extremity, and still others cover a large percentage of the body surface area. Rarely, there is intraoral mucosal involvement. These larger epidermal nevi are more likely to be associated with systemic findings, such as underlying bone abnormalities. The most common bony abnormality is shortening of the unilateral limb. The epidermal nevus syndrome is a rare disorder associated with a large or widespread epidermal nevus and many systemic findings.
The epidermal nevus syndrome is made up of a constellation of findings. These children often present with neurological deficits, including seizures, and developmental delay. They can have a multitude of bony abnormalities, cataracts, and glaucoma.  The finding of a widespread epidermal nevus in an infant should alert the clinician to the possibility of this syndrome and the need for a multidisciplinary approach to patient care.

Pathogenesis: The epidermal nevus is a hamartomatous proliferation of the epidermal components. The exact cause is unknown. These lesions are believed to be caused by a developmental abnormality of the ectoderm. The epidermal nevus syndrome has not been shown to have any appreciable inheritance pattern and is believed to be sporadic in nature. The exact genetic defect is unknown; it is most likely a result of genetic mosaicism. The involvement of fibroblast growth factor has been studied, but no firm conclusions have been made. These lesions do not show any abnormalities of melanocytes.

Histology: The findings in this condition are all located within the epidermis. Significant acanthosis and hyperkeratosis, with papillomatosis, predominates. A variable degree of pigmentation is seen in the involved keratinocytes, but this is not a disorder of melanocytes, and the number of melanocytes is normal. The granular cell layer is expanded. Many unique histological variants of epidermal nevi have been described.

Treatment: Small, isolated epidermal nevi can be removed with shave removal technique. They have a high rate of recurrence with this technique, but recurrence may take many years. The advantages of this technique are that it is relatively easy, noninvasive, and quick, and it provides an opportunity to histopathologically evaluate the tissue for any evidence of epidermolytic hyperkeratosis. The disadvantage of shave removal is that it is appropriate only for small epidermal nevi. Cryotherapy with liquid nitrogen has been used successfully, but it may leave unsightly hypopigmentation in darker-skinned individuals and should be used with caution.
Complete surgical excision is curative for small epidermal nevi. However, it leaves a scar that may be more noticeable than the nevus was. Laser resurfacing, dermabrasion, and chemical peels have been used to help smooth out the appearance of epidermal nevi.